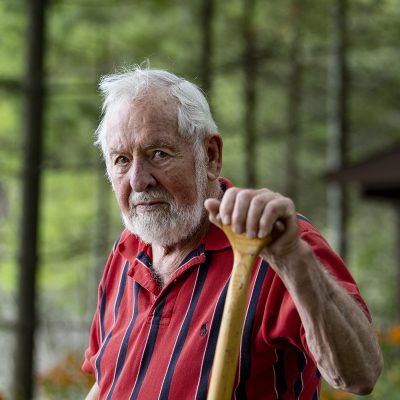 First, the loon report. Sitting on his back deck looking out at Lake Wilipyro near Drummond, Roger Dreher tells his guests about a pair of nesting loons, how they first tried to hatch loon babies in early May, made a second attempt in late May, and made one last unsuccessful try with two eggs on a floating bog.

A light breeze and sunshine trickle through birch leaves, hummingbirds dive and hum, feeding on sugar-spiked water, an eagle flies overhead, and the call of a loon can be heard in the distance. Roger’s connection to and love for this place is palpable.

Roger and Nancy did not attend Northland, nor did their kids. They attended UW-Madison, where Nancy studied law and Roger received an MS in electrical engineering.

They moved to San Francisco where Roger earned an MBA at UC Berkeley; Nancy clerked for the chief justice of the California Supreme Court. They moved to Minneapolis in 1968. Roger worked as an engineer and project manager and Nancy joined a law firm—where she worked with Northland trustee Lowell Noteboom.

“Nancy was an extraordinary colleague and valued friend. She and Roger were a wonderful team,” Noteboom said. “He was understandably proud of her many professional accomplishments, and he also infected her with his love of the north woods.”

By 1983, the Dreher’s had two young children. They bought this eight-acre parcel near Drummond (and later added an adjoining six). For the next seven years, they spent all their weekends building and finishing the current house, including the deck on which Roger sits, taking in the surrounding beauty.

Working with the Landmark Conservancy, Roger implemented a conservation easement to permanently protect his land, including the shoreland on Lake Wilipyro. The low-impact approach is evident everywhere from the native prairie landscaping in the front to the wooded buffer between the lake and the cabin.

Roger served on the board of the Wisconsin Association of Lakes, and it was through this organization that Roger started to learn more about Northland College’s environmental mission. “In Northland, I had found an institution that was closely aligned with my own values,” he said. “Northland is key to the environmental health of this region.”

Northland College Associate Professor of Forestry Jonathan Martin has visited the property with one of his classes to help Roger learn more about the forest species on his property and help guide his sustainable forest management decisions.

Jimmy Moore ‘21, a Landmark Conservancy summer stewardship intern, dropped by earlier in the morning to check in on the property—the purpose is to verify that the property is being managed per the conservation easement’s agreed-upon uses and restrictions.

In 2013, after Nancy died, Roger sold their home in Edina and moved permanently to Lake Wilipyro. At that time, he wanted to do something in her honor.

And so was born the Nancy C. and Roger Dreher Endowed Scholarship, to which Roger contributes every year.

“Roger’s giving is a fitting tribute to Nancy and a valued investment in the future of the College,” Noteboom said.