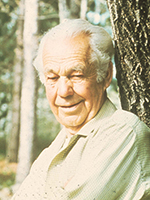 Sigurd Olson (1899-1982) was acknowledged during his lifetime as a leader of the American environmental movement, and an emblematic figure for a generation of activists. He was a writer, teacher, and activist who was a harbinger of the raising of America’s ecological consciousness.

The content below was curated by biographer Dr. David Backes, the award-winning writer of A Wilderness Within: The Life of Sigurd F. Olson. Dr. Backes retired in 2015 after twenty-seven years as a professor at the University of Wisconsin-Milwaukee. He passed on the content of the Sigurd Olson website to the Sigurd Olson Environmental Institute. We’re honored to preserve and share it.

Sigurd Ferdinand Olson (April 4, 1899-January 13, 1982), writer and conservationist, was born in Chicago, Illinois, the son of Lawrence J. Olson, a Swedish Baptist minister, and Ida May Cederholm. He spent most of his childhood in northern Wisconsin, where he formed his life-long attachment to nature and outdoor recreation.

From 1923 to 1936 Sigurd taught at a high school and then at a junior college in Ely, Minnesota. In 1936 he became dean of the Ely Junior College, a position he held until he resigned in 1947 to become a full-time writer and professional conservationist.

Ely remained Sigurd’s home for the rest of his life. An iron mining town on the Vermilion Range, it was located at the edge of several million acres of lakeland wilderness in the United States and Canada known as the Quetico-Superior. Sigurd traveled and guided there for many years, and grew convinced that wilderness provided spiritual experiences vital to modern civilization. This conviction formed the basis of both his conservation and writing careers.

Sigurd became an active conservationist in the 1920s, fighting to keep roads and then dams out of the Quetico-Superior. In the 1940s he spearheaded a precedent-setting fight to ban airplanes from flying into the area; the conflict propelled him to the front ranks of conservation. Sigurd served as wilderness ecologist for the Izaak Walton League of America from 1948 until his death, as vice-president and then president of the National Parks Association from 1951 to 1959, as vice-president and then president of the Wilderness Society from 1963 to 1971, and as an advisor to the National Park Service and to the Secretary of the Interior from 1959 to the early 1970s.

He helped draft the Wilderness Act, which became law in 1964 and established the U.S. wilderness preservation system. He played a role in the establishment of Alaska’s Arctic Wildlife Refuge, and helped to identify and recommend other Alaskan lands ultimately preserved in the Alaska National Interest Lands Conservation Act of 1980. Among his many other activities, he played key roles in the establishment of Point Reyes National Seashore in California and Voyageurs National Park in Minnesota. In recognition, four of the five largest U.S. conservation organizations—the Sierra Club, the Wilderness Society, the National Wildlife Federation and the Izaak Walton League—gave Sigurd their highest award.

Often pictured with a pipe in his hand and a warm, yet reflective expression on his weathered face, Sigurd Olson became a living icon to many environmentalists, “the personification of the wilderness defender,” according to former Sierra Club President Edgar Wayburn. He was trusting and sentimental, but also a strong leader who could bring together warring factions of environmentalists. “I think he always kept his eye on the star, and he didn’t get down here where we more common folks deal more with personalities,” said former Wilderness Society President Ted Swem. “He made wilderness and life sing,” said George Marshall, a former president of both the Sierra Club and the Wilderness Society. And yet in Sigurd’s home town of Ely, where many blamed wilderness regulations for the poor local economy, he was jeered and hanged in effigy. And, until he left the junior college in 1947, he often felt trapped in his career and sometimes despaired of his chances to achieve his dream of writing full time.

Sigurd’s large and at times almost worshipful following derives in part from personal charisma, but especially from the humanistic philosophy that he professed in nine popular books, in magazine articles, and in myriad speeches and interviews. He had a way of writing and speaking about the natural world that touched deep emotions in his audience, and many responded with heartfelt letters. An excerpt from his best-selling first book, The Singing Wilderness (1956), shows his unpretentious, yet lyrical, style:

The movement of a canoe is like a reed in the wind. Silence is part of it, and the sounds of lapping water, bird songs, and wind in the trees. It is part of the medium through which it floats, the sky, the water, the shores….There is magic in the feel of a paddle and the movement of a canoe, a magic compounded of distance, adventure, solitude, and peace. The way of a canoe is the way of the wilderness, and of a freedom almost forgotten. It is an antidote to insecurity, the open door to waterways of ages past and a way of life with profound and abiding satisfactions. When a man is part of his canoe, he is part of all that canoes have ever known.

Sigurd Olson believed that the psychic, as well as physical, needs of humanity were rooted in the Pleistocene environment that dominated the evolutionary history of our species. This, combined with his single-minded focus on spiritual values, distinguished him from other leading philosophers of the wilderness preservation movement. Sigurd was influenced by the literary naturalists W.H. Hudson and John Burroughs, as well as many other thinkers and social critics of the nineteenth and twentieth centuries, including Henry David Thoreau, Aldous and Julian Huxley, Pierre Teilhard de Chardin, Lewis Mumford, and C.G. Jung.

Sigurd Olson argued that people could best come to know their true selves by returning to their biological roots. As he said at a Sierra Club conference in 1965, “I have discovered in a lifetime of traveling in primitive regions, a lifetime of seeing people living in the wilderness and using it, that there is a hard core of wilderness need in everyone, a core that makes its spiritual values a basic human necessity. There is no hiding it….Unless we can preserve places where the endless spiritual needs of man can be fulfilled and nourished, we will destroy our culture and ourselves.”