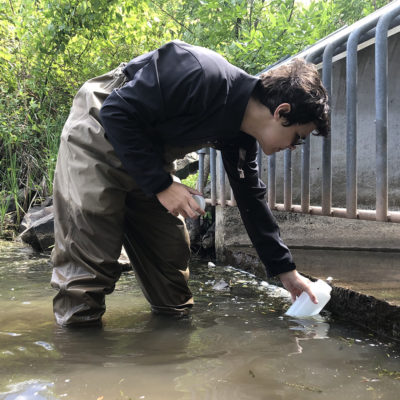 Kreher Park Beach has been closed twice this year so far due to high E. coli levels, which leaves local residents and visitors wondering—are the Ashland beaches safe to swim in? What is causing this—seagulls, geese, aging sewer pipes?  Where is the bacteria coming from?

The Wisconsin Coastal Management Program (WCMP) has awarded the Mary Griggs Burke Center for Freshwater Innovation and the City of Ashland $28,058 to find the answer.

Starting July 1, the Burke Center will begin a beach and stormwater microbial source tracking project to try and determine the biggest contributors of E. coli in Chequamegon Bay.

“The Burke Center’s interest is in the health and quality of Lake Superior and the city’s interest is also in the quality of Lake Superior — especially the beaches,” Alissa Hulstrand, assistant director of biology and affiliate faculty of the Burke Center, said. “What we are doing is bringing those ideas together and looking at the sources of potential bacterial contamination at the Ashland beaches.”

Burke Center staff will be collecting water samples from beaches they currently monitor for the city—Maslowski, 6th Ave, Kreher, and Bayview—as well as from nearby stormwater outfalls, and testing those samples for E. coli. If positive, the samples will be analyzed to determine the source of the E. coli—bird, animal, human, etc.

The samples will be analyzed using a laboratory technique called quantitative polymerase chain reaction (qPCR), a technique Hulstrand refers to as her “genetic toolkit.”

The toolkit selects and amplifies a target piece of DNA, said Hulstrand. With this method, not only will researchers be able to determine how much E. coli is present in the water, but also the source of the DNA inside the E. coli.

The process starts with Burke Center staff collecting samples from all the sites and bringing them back to the lab at Northland College to be filtered so the DNA can be isolated, extracted, and analyzed with the genetic toolkit to determine its source.

A similar project was done at Maslowski Beach in 2015 by the Burke Center, the City of Ashland, the WCMP, and the National Oceanic and Atmospheric Administration, where a total of 750 water samples were collected from 16 sites and were sent to a lab at the University of Wisconsin-Milwaukee for DNA analysis.

Results of the 2015 project suggested a diversity of factors contributed to high E. coli levels at Maslowski Beach, with runoff from Fish Creek and gulls being the biggest contributors.

Because Hulstrand and Burke Center staff can now do the testing and analyzing at Northland College, the cost of sending samples to other labs isn’t an issue this time around, said Matt Hudson, associate director of the Burke Center.

The sampling will be done by the end of the summer so they can be analyzed during the 2021-22 school year. The grant allows room for extensions for more sampling to be done next summer as well.

“It’s an exciting project,” Matt Hudson said. “We’re getting to work on a real-world problem and hopefully find some solutions.”

The City of Ashland’s role has been to help the Burke Center identify the optimal testing sites for the sampling and qPCR testing.

Sara Hudson, director of the Parks and Recreation Department, said she estimates that most of the E. coli will end up coming from the gulls, but the results of the DNA analysis will determine what actions the City should take next.

“If the results are gulls, there’s only so much we can do about that,” Sara Hudson said. “But I think this project will help us focus our efforts on what we can do to try and clean up the beaches.”