The Center for Rural Communities at Northland College conducted the poll in May, interviewing 640 randomly selected households in Ashland, Bayfield, Douglas, and Iron counties. Residents connected to public utilities or private wells were included.

Over 90 percent of resp 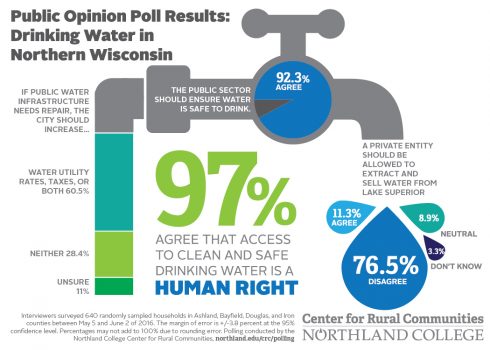 ondents agree that the public sector should notify the public of any changes in water quality or treatment methods, ensure water is safe to drink and protect drinking water sources from pollution.

The vast majority (83.9 percent) of respondents also say the public sector should be responsible for guaranteeing access to safe drinking water regardless of someone’s ability to pay.

This is well-aligned with strong opinions of water as a human right, said Brandon Hofstedt, associate professor of sustainable community development and faculty director of the Center for Rural Communities.

“Nearly all respondents — 97 percent — agreed with the statement ‘water is a human right, and every person should have access to clean and safe drinking water’ — making it the most highly agreed upon item in the survey,” Hofstedt said.

In light of legislation considered by the Wisconsin State Legislature earlier this year, which would ease the process of privatizing municipal water utilities, respondents were asked about their attitudes toward publicly and privately owned water utilities.

Over half of respondents (55.8 percent) did not think that a private entity should be allowed to earn a profit from the supply of drinking water to households.

When asked about whether a private entity should be allowed to extract and sell water from Lake Superior or the aquifers, streams, and rivers that feed it, over 75 percent of participants disagreed.

Interviewers surveyed randomly sampled households in Ashland, Bayfield, Douglas, and Iron counties between May 5 and June 2, 2016.  The margin of error is +/-3.8 percent at the 95% confidence level. A summary of results are available at www.northland.edu/polling.

Founded in January of 2015, the CRC applies research-based solutions to social and economic challenges, partners with community members to build on local knowledge and promotes the long-term health and vitality of rural communities in the north woods region.