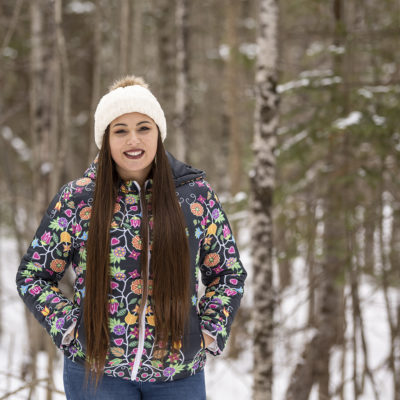 At the start of the pandemic, Haley Hyde ’19 not only had to figure out new ways to do her job remotely but she had to do it with two young children. “Those first few weeks were nothing but stress—lying-in-the-bathtub-crying-for-three-hours-at-night-kind-of-stress,” she said.

As an early Head Start home-based teacher, Haley’s job was built on face-to-face interactions with prenatal moms, newborns, and young children. When Wisconsin shut down last spring, like most people, she started working from home—communicating by phone, emails, and mail. “I was trying to achieve what I had achieved on-site,” she said. “The fact was, it was completely different.”

For one, her two children—ages 2 and 6—were also at home. “I had to balance the needs of two tiny humans, as well as myself, while still doing my job,” she said. “It all felt like a chaotic balancing act.”

And Haley is no stranger to balancing chaos. She had two babies while attending college and working full time. Her youngest was born in August 2018. A month later, she was back at work and starting her final semester at Northland with a one-month-old strapped to her chest. “It’s the only way I could have made it through that last semester,” she said.

So, to make it through the pandemic, she found new ways of doing things. She designed an outdoor office so that she could remain in Wifi range while her kids played in the yard. “They were able to accomplish so much without me intervening at all and I think that watching that really helped me steer myself in the direction that I plan to follow as an educator.”

In July 2020, she was offered a position as a 4K teacher—and so began learning a new role while juggling remote communication. That said, she’s had great support from her coworkers. “I think that the pandemic has actually made it easier for me to reach out and ask for help,” she said.

She was also able to use the technology to ask for feedback from caregivers. “I have always looked at education as a team approach—student, teacher, caregivers, community—and this year has only amplified that belief and pushed me to find alternative ways to put that into my practice,” she said.

One of the first things she did when she started her new job was to help create an outdoor classroom for kids with stumps for chairs arranged in a circle. The kids will be returning for the first time in March 2021—and she’s ready. Nearly one year into the pandemic, Haley says her biggest takeaway is this: slow down.

“I think that even though it was stressful to work from home and deal with such a huge unknown, it was also a great time to self-reflect and slow down. I re-evaluated a lot of my goals in education,” she said. “I will be keeping the emphasis on outdoor education, even after the pandemic is over.