At Northland we live our sustainability mission every day. We consider how our actions will advance sustainability in all of its forms: health, community, culture, environment, energy,  and economy. It’s from a full-spectrum point of view that we seek to understand, develop, and respond to our institutional goals. Going green is a part of everything you’ll do at Northland, from how you live, to what you learn, and ways you contribute.

We have a student director of sustainability who organizes the Environmental Council, runs the REFund grant program, and is a member of the Northland College Student Association. Additionally, we have a a joint faculty, student, and staff Sustainability Work Group charged with collaboratively advancing Northland’s sustainability commitments. 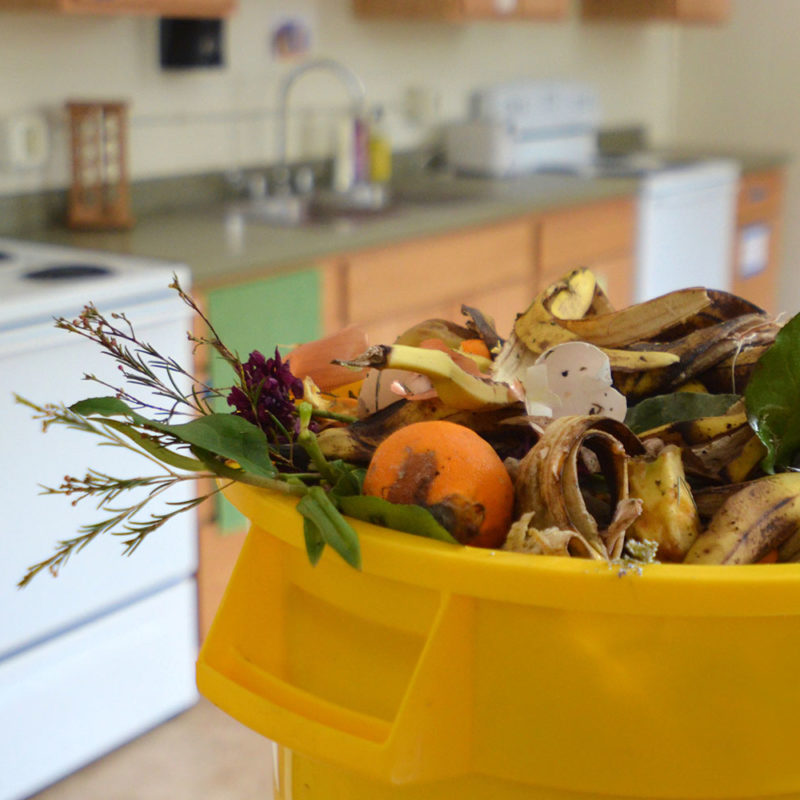 Student volunteers first launched the campus composting program in 1993. And still today, our compost program is lead entirely by work-study students who manage every aspect, including daily food scrap collection, monitoring the biological process, and final distribution. Our finished compost is used in campus gardens. This initiative has kept hundreds of thousands of pounds of food waste out of the landfill. Learn more. 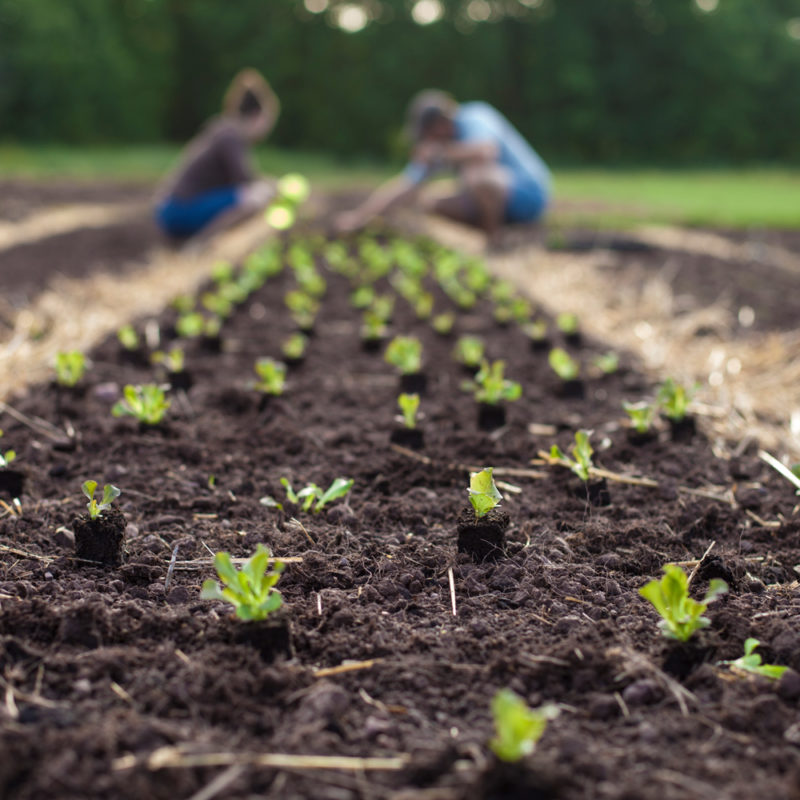 Students manage multiple garden spaces on campus: an agro-ecological permaculture garden behind the McLean Environmental Living and Learning Center; a community garden with plots available to rent to students, faculty and staff; and a new edible perennial garden at Memorial Hall. The gardens provide fresh produce to our cafeteria, food that is sold to the campus community, and is also used out on the trails during Northland’s outdoor orientation trips each August. 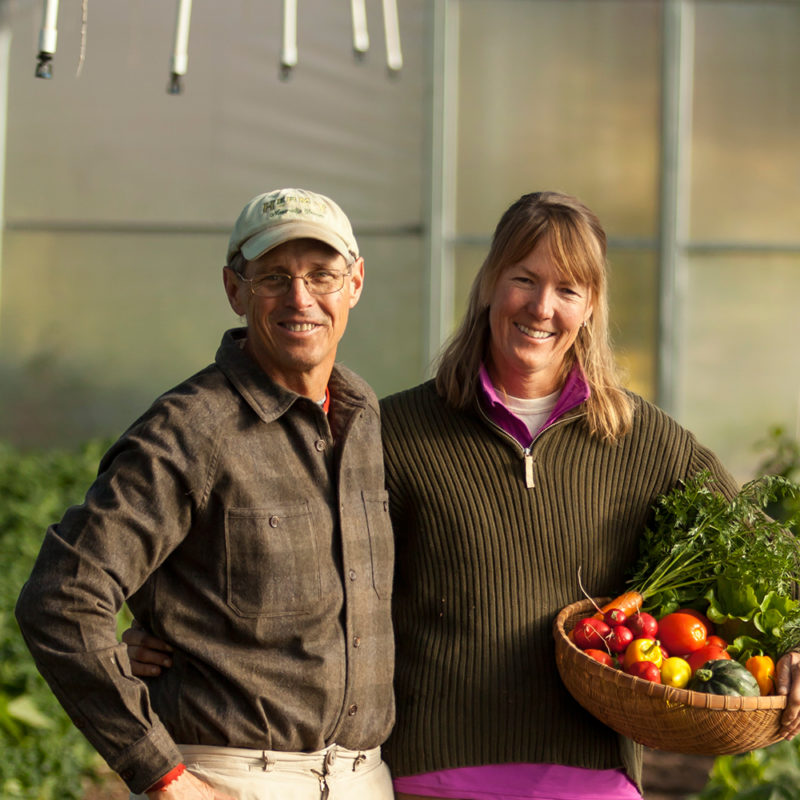 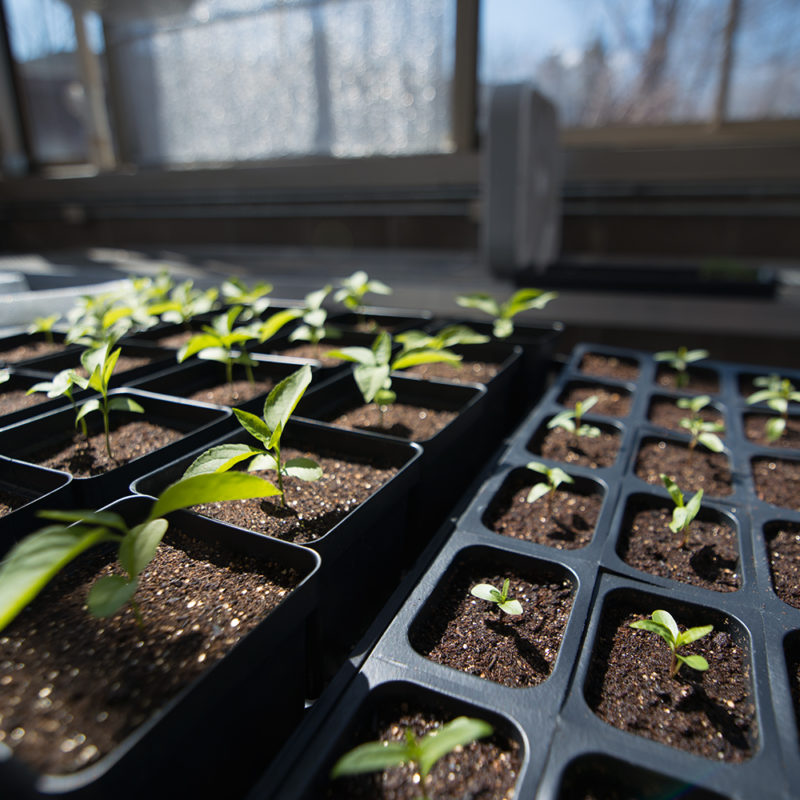 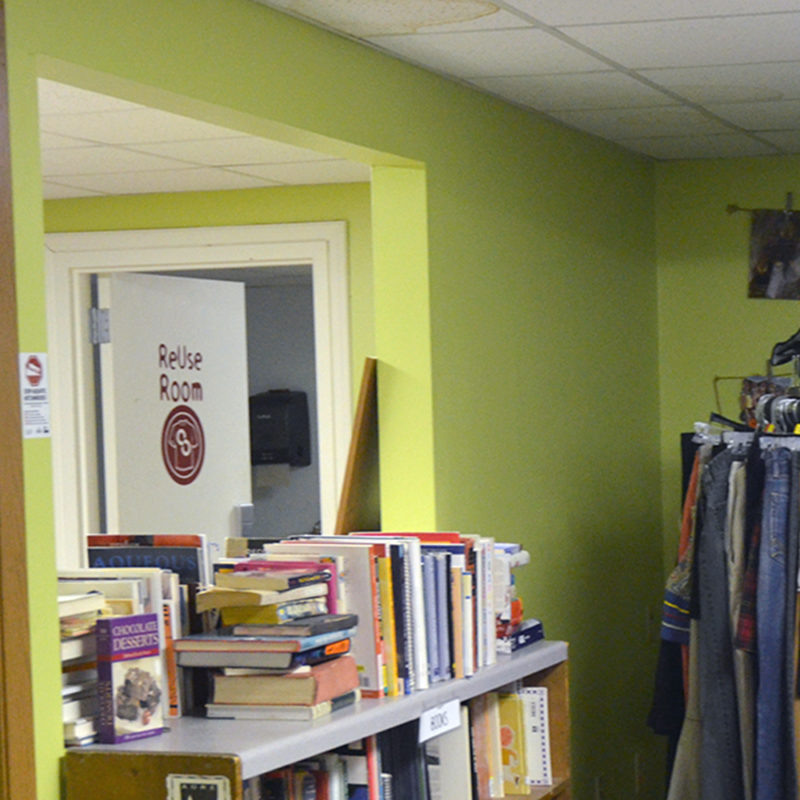 The ReUse Room, located in the basement of the Townhouses, is a thrift shop staffed by students and volunteers. Donations from students, staff, and faculty include used clothes, CDs, books, and household items. All items are free. Learn more. You can also join the Northland College Reuse network on Facebook. 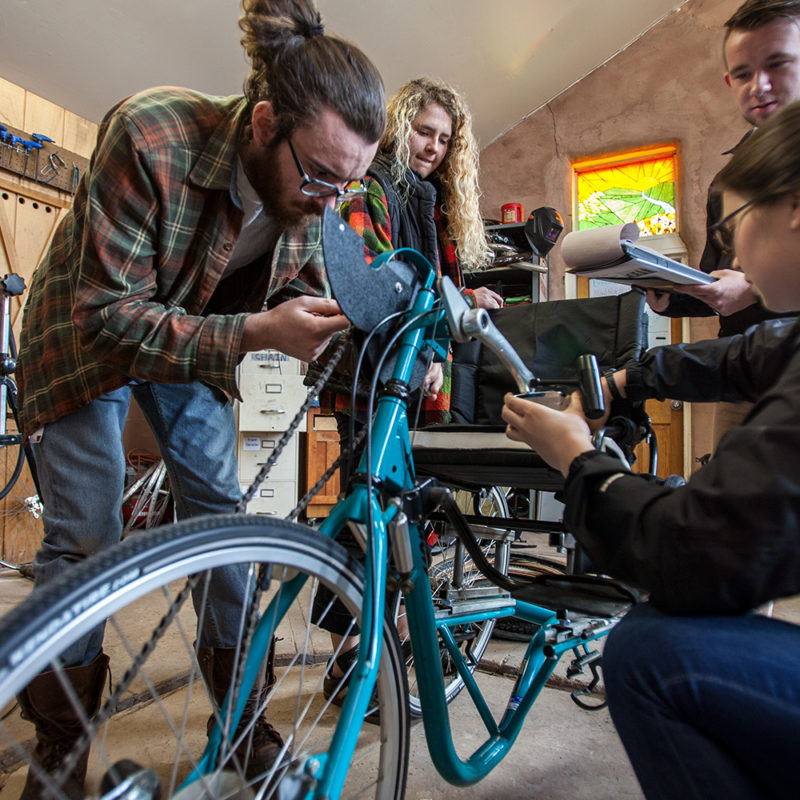 Since the mid-1990’s, Northland’s Sunshine Community Bike Shoppe has served as a hub for bike enthusiasts. The shoppe has tools, parts, and plenty of advice to offer to anyone who wants to repair their bike or build a bike from scratch. If you are interested in learning the ABC’s of bike repair, you are welcome and encouraged to volunteer alongside our work-study students who manage the shoppe. Learn more. 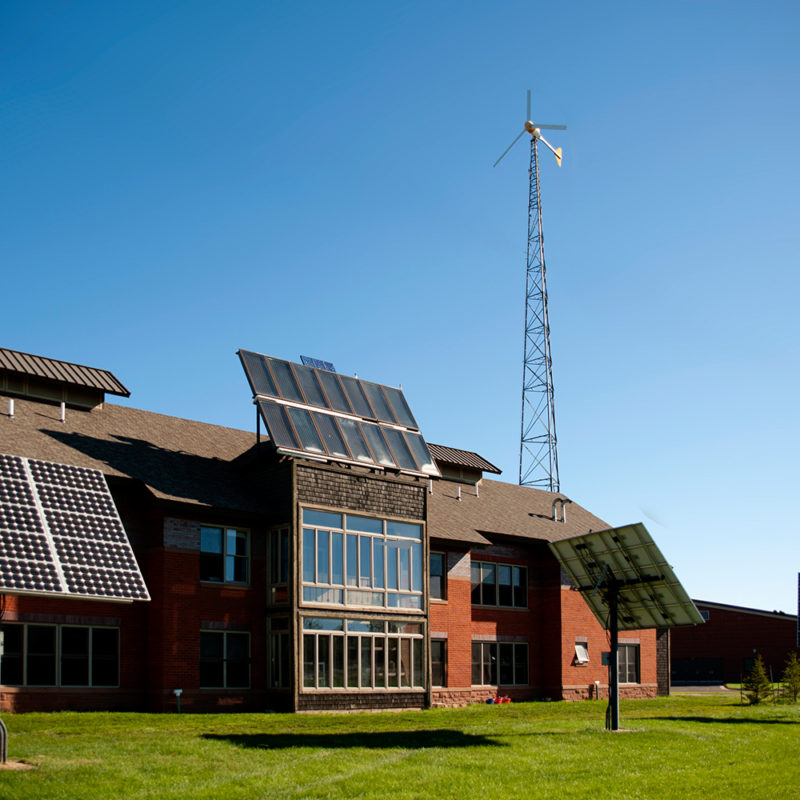 The McLean Environmental Living and Learning Center, which opened in 1998, is a unique residential space and was an early model for green design. Three photovoltaic solar arrays provide efficient active solar energy collection. A 120-foot 11 kilowatt wind turbine is located at the southeast corner of the building. Fourteen solar panels placed on the roof of the south wing preheat hot water for residential use. 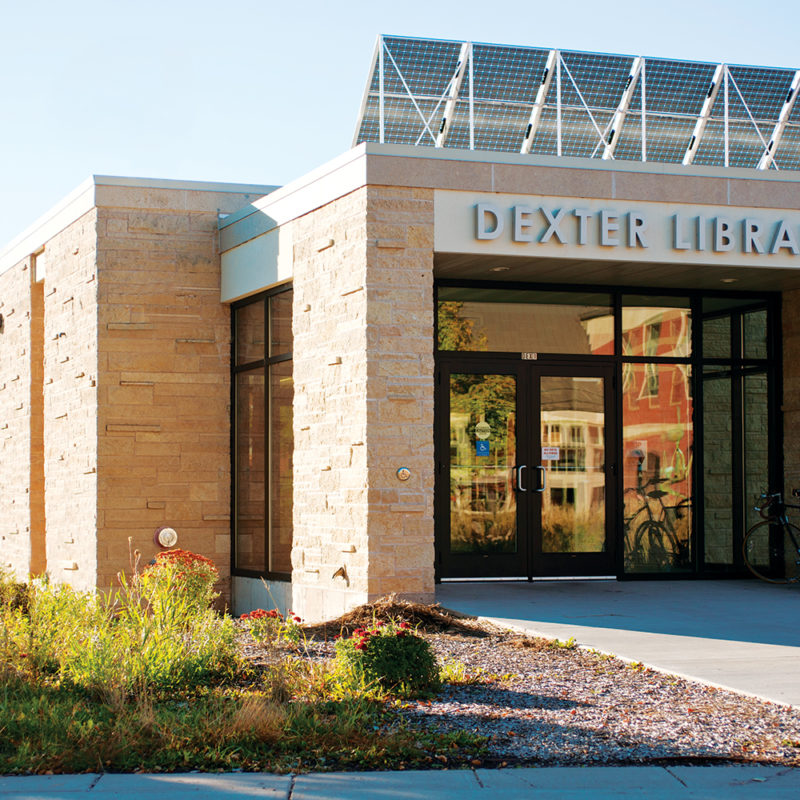 Northland’s Dexter library was renovated in 2008 and was one of the first LEED Gold certified buildings in Wisconsin. To receive a Gold level certification, the project had to control not just what was built, but what was thrown away. 75% of the construction and demolition waste was diverted from landfills. These materials were either recycled or reused, reducing the burden on landfills and the demand for virgin resources. Learn more.

Northland College ranked first in curriculum for its courses, programs, and learning outcomes in sustainability, as well as living laboratory initiatives, immersive experiences, sustainability literacy and faculty development according to the Association for the Advancement of Sustainability in Higher Education (AASHE) Sustainable Campus Index.  The index evaluates using the Sustainability Tracking, Assessment and Rating System (STARS), a voluntary framework used by hundreds of colleges and universities to measure, report, and strengthen their contributions to global sustainability.

Northland has also earned a STARS Gold rating in recognition of its sustainability achievements from AASHE which measures and encourages sustainability in all aspects of higher education.

“Northland approaches sustainability in all of its forms — health, community, culture, environment, energy, and economy — and integrates it into the academic curriculum and the research done by our students and faculty,” said Scott Grinnell, director of sustainability initiatives. “This assessment validates our intentional work to bring full-spectrum sustainability into the center of all we do as a college. Read more.

REFund projects are evaluated on the following criteria from the program goals and effects, based on how the project is able to:

Earned a STARS Gold rating in recognition of its sustainability achievements from the Association for the Advancement of Sustainability in Higher Education (AASHE).

Signed on to “We Are Still In” after the Trump administration’s withdrawal from the Paris Climate Agreement.

Infrastructure for a new edible perennial garden is constructed at Memorial Hall.

The Mary Livingston Griggs and Mary Griggs Burke Foundation in St. Paul, Minnesota, awarded a $10 million endowment to support freshwater research at Northland and at a former home of the Burke family, Forest Lodge in Cable, Wisconsin.

Northland officially launches the Mary Griggs Burke Center for Freshwater Innovation later this year focusing on scientific research, communication, and thought leadership on water issues in the Great Lakes region and beyond.

A comprehensive Energy Study for Climate Action plan is completed. The study assesses technical, economic, and environmental costs and benefits of the options available for reducing campus CO2 emissions from our current level of about 3,500 metric tons of CO2e/year to net zero.

Northland establishes the Center for Rural Communities applying research based solutions to social and economic challenges, partners with community members to build on local knowledge, and promotes the long-term health and vitality of rural communities in the north woods region.

Grant funding is received from the Margaret A Cargill Foundation for a three-year sustainability initiative that focuses on three critical and interconnected sustainability challenges facing our community today:

Northland approves a new Strategic Plan in which we commit to:

An enhanced local food purchasing initiative is launched in partnership with the Chequamegon Food Coop, UW Extension, and a number of local farmers.

Northland’s ReUse Room moves into a new and much larger space in the basement of the Townhouses.

After a successful fall 2008 pilot project, trays are no longer offered in the cafeteria, saving water and energy while reducing food waste.

Northland students expand the community garden to include individual summer plots for those who want to grow food, but don’t have a space of their own.

The Arbor Day Foundation honors Northland College as a Tree Campus USA college for its dedication to campus forestry management and environmental stewardship. The College is the first college or university in Wisconsin to earn Tree Campus USA status.

Students voted to double their contribution to the Renewable Energy Fund.

After positive response from students using the free B.A.R.T. passes, the free service was expanded to include faculty and staff.

Northland became a member of the leadership circle of signatories of the American Colleges and Universities Presidents’ Climate Commitment.

The solar hot water system is completed on McMillan hall, partially heating the water with the sun and thereby reducing the use of non-renewable energy.

Students open the Reuse Center, a space to give and receive free clothes, books, and other items instead of throwing them away and buying new.

The Northland College Student Association formed a contract with Bay Area Rural Transit (B.A.R.T.) to provide free transportation to students wishing to travel around the bay area without a car.

Northland officially adopted the Natural Step Framework as its definition of sustainability.

In the College’s Strategic Plan, Northland’s President Karen Halbersleben reaffirmed the institution’s vision to be the nation’s leading environmental liberal arts college: “Northland College aims, by academic excellence and sustainable practice, to lead the way to a world where human and other biological communities can thrive together indefinitely.”

Northland College received the Award for Excellence in Environmental Resources and Stewardship from the American Bar Association.

The EcoLeague was founded, allowing students of Northland and five other green colleges around the country opportunities to pursue environmental study at any and all league campuses.

The Craig A. Ponzio Campus Center was constructed, featuring a geothermal cooling system.

The Northland College Student Association began including a Renewable Energy Fee for students. The funds raised have been used for many projects, including a Prius hybrid vehicle for the admissions department and a solar water heater on McMillan Hall.

The McLean Environmental Living and Learning Center, which served as a model in developing the national LEED green building standards, began housing over a hundred students a year. The building features advanced sustainable design principles such as furniture and carpet made with recycled content, lighting occupancy sensors, two composting toilets, low-flow water fixtures, three photovoltaic arrays, a wind turbine, and much more.

Northland College Student Association, the faculty, the administration, and the board of trustees signed a self-designed Sustainability Charter and the college president, Robert Parsonage, signed the Talloires Declaration.

Students began the Sunshine Community Bike Program, which provides free bikes to anyone who needs to borrow one. The bike shoppe also repairs bikes, and students can build their own bike in exchange for service hours.

The cafeteria has offered vegan and vegetarian entrees at all meals since 1995, and now features 100 percent sustainably harvested seafood, cage-free shell eggs, no trans-fat frying oils, and Fair Trade coffee.

Mino Aki, a student-run garden, was created on campus, fertilized by compost from the cafeteria. The garden continues to grow food for the community. After a group of students studied the feasibility, Northland’s cafeteria began offering local vegetables.

The College and SOEI received the national award for environmental achievement from Renew America.

The College became US secretariat for the Lake Superior Binational Forum to promote citizen involvement in a program to virtually eliminate the discharge of nine critical pollutants into Lake Superior.

Campus and the Biosphere conference hosted at Northland to discuss ecological impact of college campuses.

Northland College Environmental Council was formed of staff, students, and faculty to determine environmental projects and policies for the College.

Construction began on a new building for the SOEI, which features passive solar design principles, and also began a community education program on energy conservation.

Northland began a systematic upgrade of all windows and boilers in every building on campus.

The College enrolled its first class of environmental studies students and founded the Sigurd Olson Environmental Institute (SOEI) and its advisory board and designated its charter for environmental outreach.

The Northland College Board of Trustees initiated the development of the College’s environmental studies program.

Since its founding in 1892, Northland College has been both a leader and a pioneer, bringing higher education to the north woods and making a bold decision to be a different kind of college by focusing our mission and liberal arts curriculum around issues of the environment and society.