As we reach the end of Pride Month, student intern Toni Alioto ’22 delves into the history of the pride flag—its creation, its meaning, and its continuous adaption to the changing landscape that is the LGBT2QAI+ (lesbian, gay, bisexual, transgender, two-spirit, queer/questioning, ally, intersex, +) community.

The rainbow flag has become an international symbol for Pride, but it started flying in the community long before it reached this status. In June of 1969, New York Police raided the Stonewall Inn, a gay club in Greenwich Village. Police forcefully removed staff and clubgoers from the premises, sparking a riot which resulted in a six-day long protest and many violent fights with NYPD officers in the surrounding area. This moment in history is said to have spurred the gay rights movement throughout the world. Eventually, this movement—and some insistence from Harvey Milk and others—would inspire artist Gilbert Baker to create the first rainbow flag in 1978. Baker, an openly gay man and drag queen, wanted to create a new symbol to separate from the oppression and trauma attached to the old symbol—a pink triangle used to mark LGBTQIA+ prisoners during the Holocaust—and usher in a celebration of love instead. He decided a flag would bring power to the community. And in a hazy night of revelry, the idea struck him—a rainbow. According to Baker, this rainbow would become a symbol of liberation.

You can read the full origin story of the flag here.

The symbol of liberation may serve the flag in all its rainbow glory, but there was more than just the thought of liberation put into the meaning of the flag. Gilbert Baker made sure of it. He attributed a meaning to each individual color in the hope of inclusivity. To quote Baker himself, “What I liked about the rainbow is that it fits all of us. It’s all the colors. It represents all the genders. It represents all the races. It’s the rainbow of humanity.” In Baker’s original flag, the eight-color version, pink sat at the top, which stood for sexuality. Following downward, red stood for life, orange for healing, yellow for the sun, green for nature, turquoise for art, indigo for harmony, and violet for the soul.

But we humans can be vessels for change, and so are our symbols, including the pride flag. It first changed due to the lack of fabric availability in pink and turquoise, which were removed from the flag completely, and indigo, which was replaced by basic blue. Thus, we arrived at the six-striped flag we know today: red, orange, yellow, green, blue, and violet. The community took this symbol and ran with it, and now we have many variations, some even including the stars from the US flag in the top-left corner of the six-striped rainbow flag, pixelated laser cats, and frogs. The most prominent pride flag seen today would be the Progress Flag, created in 2018 by Daniel Quasar to bring intentional focus to identities within the LGBTQ2AI+ community for whom progress is still needed: trans people and people of color. This flag added a white, pink, baby blue, black, and brown striped triangle to the left side of the six-color rainbow flag to highlight the work still needed in support of these specific communities. In 2021, an additional triangle was added to the left of the progress pride flag thanks to Valentino Vecchietti. It represents those in the community who identify as intersex through a purple circle superimposed over a yellow triangle. 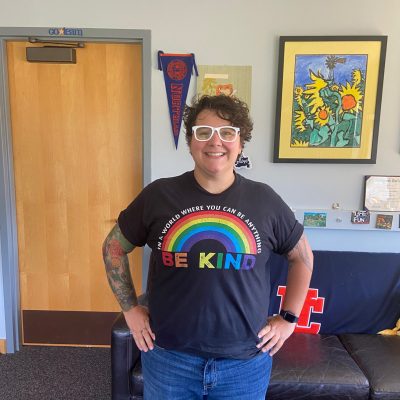 Jackie Moore ’05, former president and current advisor of The Alliance, created the Pride Flag that is displayed on campus each year.

Because of Gilbert Baker and his answer to the call for a symbol to represent the liberation of the LGBTQ2AI+community, the pride flag has changed alongside the community it represents, keeping it ever prominent and inclusive. If you happen to have walked through the Ponzio Campus Center this Pride Month, you likely had a chance to view Northland’s own extra-large pride flag, constructed by Director of Alumni Relations and Annual Giving, Jackie Moore ‘05. Jackie also serves as an advisor to The Alliance. The Alliance at Northland works to bring understanding of lesbian, gay, bisexual, transgender, two-spirit, queer/questioning, ally, intersex issues to the Northland Community while creating an open and inclusive space for all. While attending Northland as a student, The Alliance, in which Jackie was president, needed a pride flag for the Day of Silence, a national student-led demonstration where LGBT2QAI+ students and allies around the world take a vow of silence to protest the harmful effects of harassment and discrimination of LGBT2QAI+ students. At the time (2004–2005), pride flags weren’t as readily available as they are now, so The Alliance had to make their own. Jackie took up the call and constructed the flag out of bolts of fabric her senior year at Northland in her Ashland apartment—at her kitchen table. Even though that specific handmade flag is nearly twenty years old, it’s still used for many LGBT2QAI+ events, such as the drag show, Pride Month, and the Day of Silence. Here’s what Jackie has to say about it still being used on campus today: “I LOVE IT!!! It brings me so much pride and joy seeing that flag up on campus still. It’s nearly 20 years old and other than needing some grommets and small repairs, which I might work on this summer, it has held up very well. I believe this to be testament to every Northlander who took care of it over the last twenty years. Thanks to Kat Werchouski ’07 and other alumni who have taken part in preserving this flag and The Alliance over the years.”

The symbol of liberation for the community that Gilbert Baker first designed has been recreated by many over the years to what it has become today—a symbol that fits even more members of the ever-expanding community under its rainbow of humanity, just as Northland’s own campus pride flag is a symbol of inclusivity and the resilience of the LGBT2QAI+ community on campus today.

Do you have interest in becoming more active in the Northland LGBTQ2AIP+ community? Check out the Northland College Alliance Facebook Page.