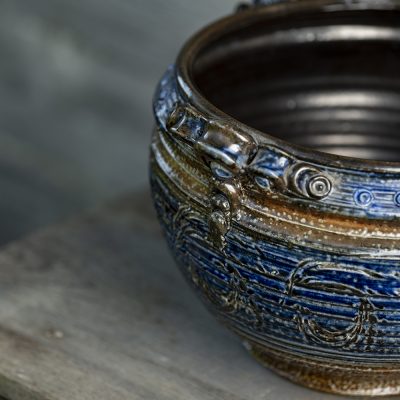 Useful knowledge while stimulating the mind is a deep legacy of ceramic arts at Northland College.

Northland’s ceramics legacy began in the red clay of the campus with the industry of students and faculty. In the throes of the Great Depression, Northland began the Craft Shop program to provide income for students struggling to pay their expenses.

The Craft Shop, built on craft movements in New England and Scandinavia, was designed to produce useful artistic products from native materials and market them throughout the region. The venture included a broom shop, copper shop, print shop and bindery, and a ceramics shop and studio. Founder and director Nathaniel Dexter experimented with red clay drawn from the campus ravine. Pottery from that period reveals the rustic beauty of the materials on campus.

In 1955, the College hired Robert Eckels to revitalize the ceramics and craft programs and to establish an art department. Eckels’ new department included the traditional disciplines of drawing and painting, and his work in the Craft Shop revived the Dexter model of ceramics.

The program was unique in higher education, combining academic studies with a production studio. Eckels would write, “people didn’t know what art pots were then. You couldn’t get a degree in ceramics anywhere in the United States.” Eckels shaped the new program around three central ideas: that crafts should include artistry, that art should have utility, and that artists should be able to make a living as artists.

Eckels recalled, “there were only two pottery shops in Wisconsin—Abe Cohen had one in Milwaukee, and there was ours.” Eckels continued summers at the Pot Shop where college students could apprentice with their professor, refine techniques, and perfect their craft. That program became an integral part of a ceramic arts legacy that laid the foundation for the region’s art scene.

Eckels also contributed to Ceramics: A Potter’s Handbook, the standard textbook for ceramics instruction. Apprentices came to the Chequamegon Bay from all over the United States and Europe to study with Bob. 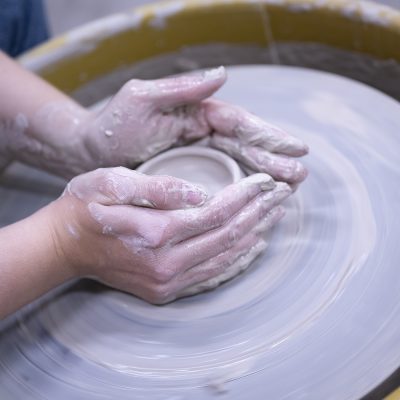 Karlyn (Welton) Holman ’62 was the first of more than eighty interns to learn the art and business of professional, production ceramic arts. Studying art at Northland, Karlyn would eventually best be known as a watercolor artist, teacher, and owner of Karlyn’s Gallery in Washburn, Wisconsin. But her early work came from the potter’s wheel. Karlyn recalled with her characteristic laugh, “someone once told me I was too happy to become a painter, so I threw pots!” Learning the business and industry of the arts, as well as creative craft, laid the groundwork for Karlyn’s own gallery and apprentice program.

Holman succeeded Eckels as an art professor at Northland, expanding the influence of the College on the arts and crafts scene in northern Wisconsin. The artists and apprentices attracted to the College and the region included potters who would teach at Northland. Stan Samuels’ tenure at the College saw the introduction of raku firing. Next, Viken Peltekian’s emphasized creative, sculptural clay form, as well as functional craft pottery.

Ceramic arts and the potter’s wheel are now in the hands of Assistant Professor Lauren Duffy, who arrived in 2015.

“Before I came to Northland, I knew the name Bob Eckels from contemporary ceramics history. Coming to Northland and knowing that Bob started the ceramics program—it felt super cool to be connected to the legacy of people I had read about in books,” she said.

Duffy also sees new directions for ceramic arts in the region. “I’m trying to balance both new and old technology, and both functional and conceptual work,” Duffy notes. “I believe learning what functionality is and how to achieve a utilitarian object goes hand-in- and with developing conceptual work. I feel the work in this area is very place-based, and I think this will continue as this area seems to connect with people, so they want to take the inspiration with them.”

Northland ceramics continues a cultural legacy in clay and in the work of students who learned how to center clay on a wheel here. The utility of a well-formed bowl, the beauty of form and color in a glazed pot, and the stimulating artistry of clay sculpture are the products of clay arts. It’s a legacy as ancient and contemporary as the red clay soil of Northland College.