Northland College senior Megan Mader inches a jon boat into the vegetation near shore at Galilee Lake, a shallow, 212-acre lake with a handful of cabins dotting the shoreline. Mader is conducting research on fish communities to learn more about the lakes of the Penokee Hills, located an hour southeast of Ashland.

This research documenting what fish species reside in the Penokee Hill lakes will be used for Mader’s senior capstone project; and will be incorporated into a lake management plan written by the Burke Center for a series of eleven lakes in the Penokee Hills. The management plan will provide data on baseline conditions in these lakes and recommendations on maintaining and improving the health of the lakes into the future.

Mader approaches her first fykenet—a bag-shaped net, held open by hoops, used in aquatic research— of the day. Her three-person crew of Burke Center student researchers is pointing and looking at a bald eagle perched atop a white pine, its nest in a nearby tree. 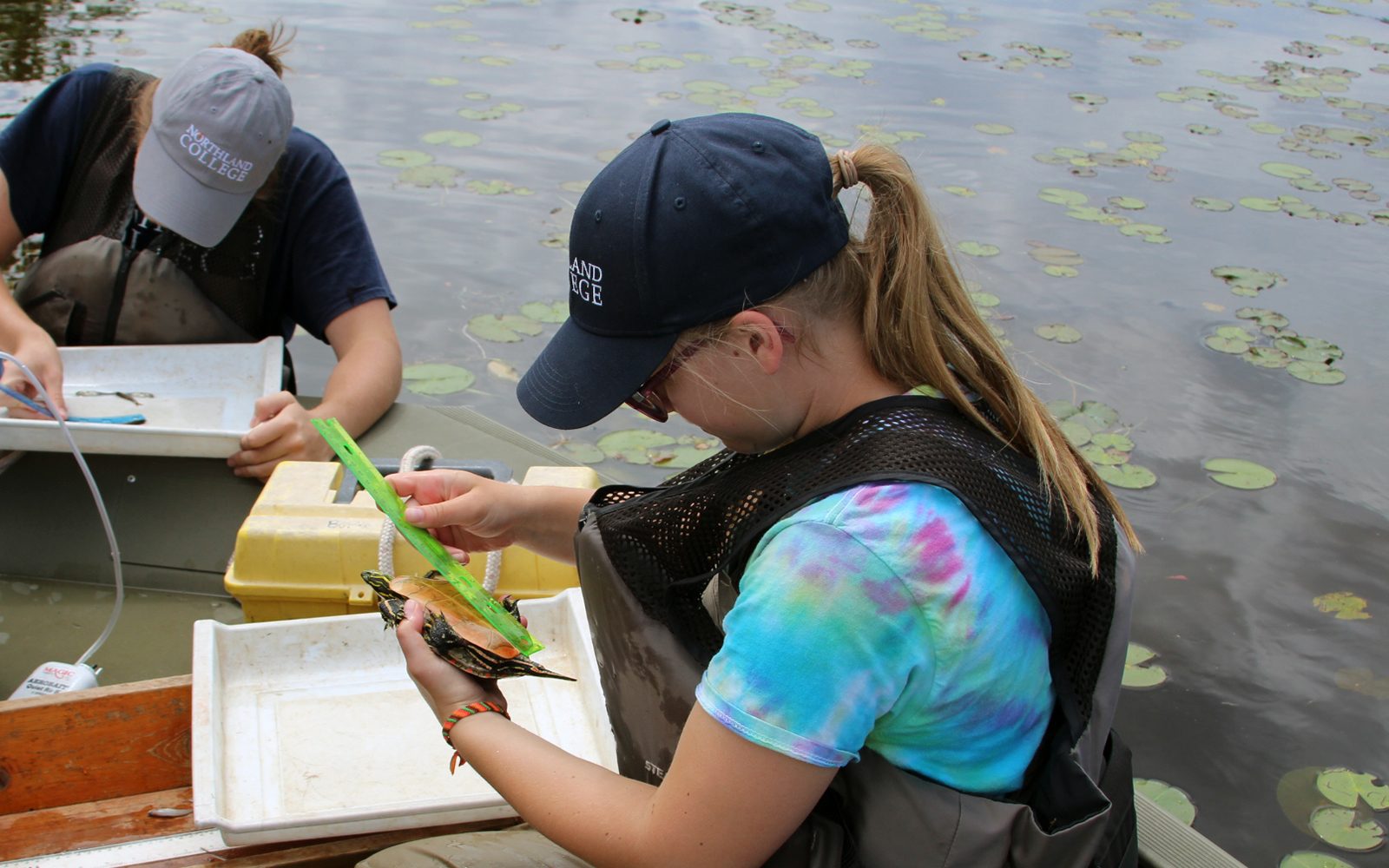 The boat creeps into the shoreline vegetation. The eagle takes flight. The crew jumps into action, splashing into the waist-deep water in waders, and methodically working their way through the net. They analyze, record, and release bluegill, perch, shiners, brown bullheads, crappie, and one painted turtle.

Mader notes the prominence of bluegill in her samples. It’s their spawning season—something that will impact her data set, one reason she’ll back for more data in the fall. “Spawning bluegills act more aggressive and move closer to shore to lay their eggs,” Mader said.

Originally from Park Falls, Wisconsin, Mader was drawn to Northland for its science programs and lakeside setting. She began working at the Burke Center the summer after her freshman year, studying lakes as a research technician. Megan then progressed to the role of a research assistant, helping train incoming students and studying wetlands alongside research scientist Matt Cooper.

Mader is a double major in water science and natural resources with an emphasis in ecological restoration and a writing minor. She is a member of the Northland softball team, ski club, enjoys fishing and hiking in the area and has led an Outdoor Orientation trip.

She became interested in fish communities and their food web connections after conducting water surveys in the Penokee Hills. The lakes are close in proximity, only a mile apart as the crow flies in spots but connected sometimes by thirty miles of stream. With so much water flowing she hypothesized there must be vibrant aquatic life.

However, there isn’t much for fish data on the lakes.

In the past decade, open-pit iron mining has been proposed for the Penokee Hills. “The most recent mining proposal has been abandoned, but there is a very large ore deposit here and will undoubtedly be of interest for mining in the future, “said Matt Hudson, water scientist with the Burke Center.

“The data we are collecting on these lakes will provide an important baseline should mining ever come to the area, will help in understanding how a mine may affect the lakes and can be useful in planning how to minimize or mitigate effects from a mine on the lake ecosystems,” Hudson said.

As Mader processes the fifth of six nets for the day, a homeowner on the shore and Megan exchange pleasantries. Mader believes her work is important in mediating disparities between scientific and lay communities. Working in the Penokee lakes Mader says she felt she really got to “connect with the landowners.”

A vigorous shaking of the net encourages the fish to dive towards the bottom. One large fish, the largest the crew has seen all day, remains near the top, and Mader lets out a yelp of excitement. 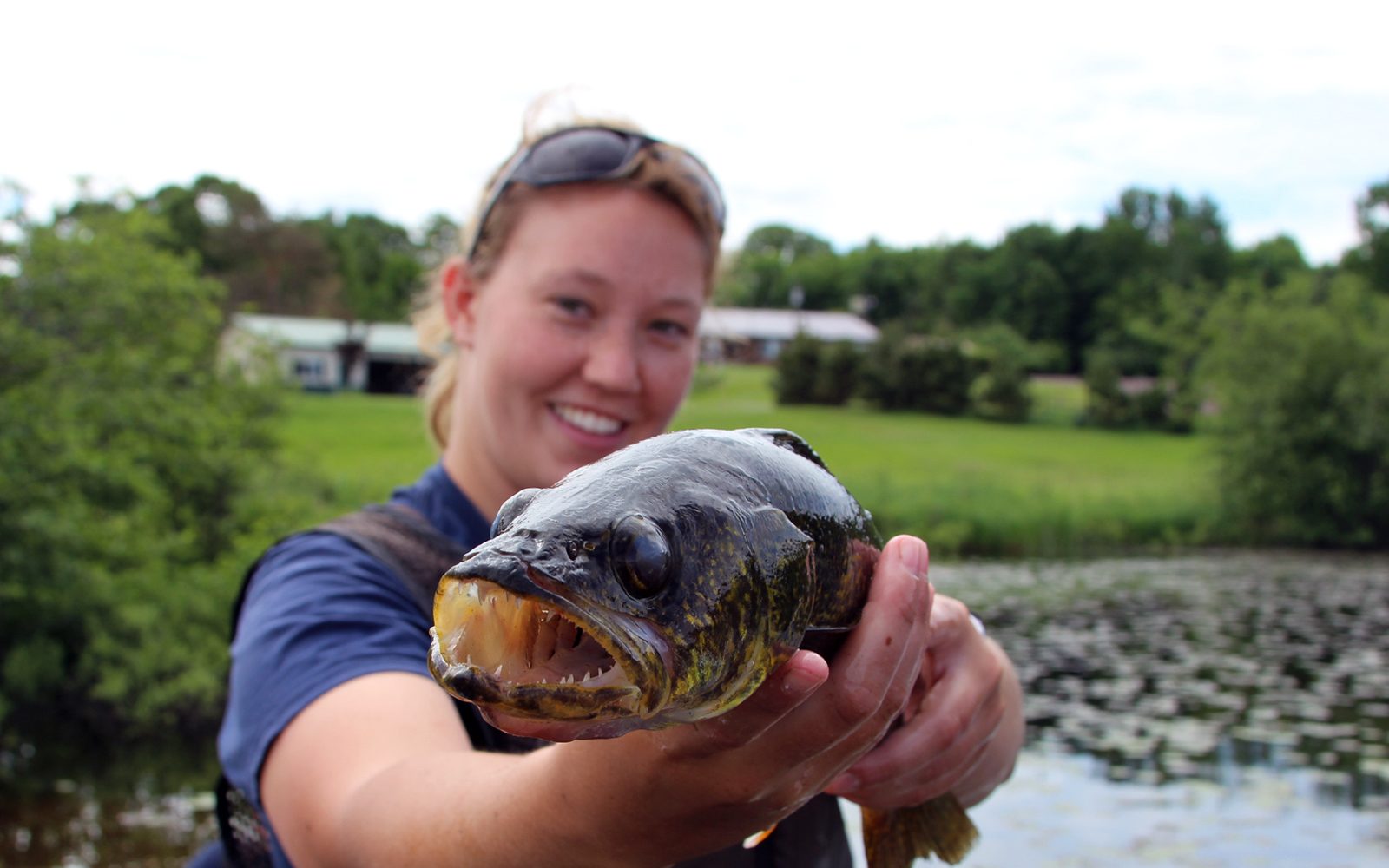 They’ve caught a walleye—long and mucky green like the water, with a menacing mug. Mader and her team treat the walleye like a newborn baby, flushed with joy that they’ve caught such a sizable and unique sample. Mader notes that the fyke nets don’t usually appeal to larger fish, because of the small mesh, however, this variability is excellent for data sets.

Working for the Burke Center, Megan says she feels ready for what will come after graduation next year. The connections she’s fostered with other students, and professors, and the opportunity to attend conferences have made her feel prepared for a job in natural resources or to move onto graduate school. “The best decision I made for academics was to be at the Burke Center,” Mader said.

This article first appeared in the Ashland Daily Press.