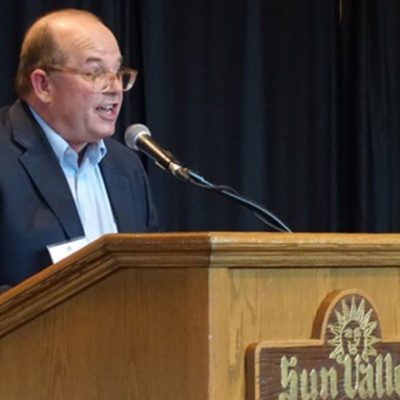 As a cub reporter at the County Journal in Washburn, Rocky Barker ’75 found himself at the right place at the right time on March 2, 1977. There were plans to move a seven-room, fully furnished house using a thirty-ton truck, across the ice from Port Superior to LaPointe on Madeline Island.

They were moving the house on a Wednesday, the day the County Journal went to press.

Barker drove out onto the ice road in his VW bug to get a shot of the truck driving the house across the ice. But the seven-room, fully furnished house made only three of the four miles on the ice road to Madeline Island before it tilted off the driver’s side and the truck sank.

Barker raced back to the newspaper office in Washburn and yelled to Editor Don Albrecht, “Hold the presses!” The photo of the house sitting crooked in the broken ice ran in newspapers from Miami to Tel Aviv. The Los Angeles Times ran it on the front page.

He was part of a team of reporters chosen as finalists for the Pulitzer Prize in 2007 and the Wilderness Society awarded him the Aldo Leopold Award for Distinguished Editorial Writing in 2014 for his “honest, no-nonsense reporting on Idaho’s environmental issues.”

He writes a blog called Letters from the West and is the author of several books including, Scorched Earth: How the Fires of Yellowstone Changed America.

“Rocky is a single-minded chronicler of our evolving understanding of humans in the ecosystems of the west,” said Dean Miller, development director at North Olympic Land Trust. “Few have devoted as much time and attention to western issues and even fewer have spent as much time as he was out in the wild places where the stories unfold.”

As for that house, in the north woods can-do spirit, it was lifted, taken to Madeline Island, gutted, dried out, and remodeled. The truck was also salvaged and used again.