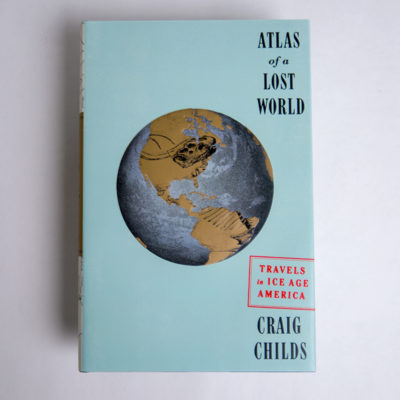 Author and wilderness traveler Craig Childs will be receiving his third Sigurd F. Olson Nature Writing Award for his 2018 book Atlas of a Lost World: Travels in Ice Age America, at the Sigurd Olson Environmental Institute Thursday, September 19 at 6:30 p.m.

Like many of his adventures in desert environments, Childs has decided to veer off-the-beaten-path with a non-traditional presentation. Childs will perform “storytelling theatre” with local musicians, Andy Noyes and Dag Bystrom.

Atlas of a Lost World chronicles the last millennia of the Ice Age, the violent oscillations and retreat of glaciers, the clues and traces that document the first encounters of early humans.

Northland College student Mya Simon, who is majoring in English and Native American studies, contacted Childs to ask him a few questions about his visit.

Mya: What does receiving the SOWNA award for the third time mean to you?

Craig: I believe Sigurd Olson and I have been on similar paths in different times, digging deep into the wild places we know by heart, and speaking for them, writing of their values, twists and turns, beauties, silences. His place was up here in wilderness lake country, mine is in the deserts of the Southwest, two powerful presences. Being honored with this award for the third time tells me that I have a mentor in this man, someone I should be listening more closely to.

Mya: Can you talk about your connection to Northland College in Atlas of a Lost World?

Craig: This award is what first brought me here and I fell for the place. I arrived in January during a white out and walked onto the frozen bay mesmerized. When I returned in later winter, the second time I received the award, it was during a Polar Vortex event. I was researching this Ice Age book at the time and found this to be a perfect opportunity to take a toboggan with gear and walk alone onto the lake where I spent the coldest nights of my life. I had helped students with the construction of a snow shelter days earlier, and I retreated to it for one of the nights. From this vantage, I could write about the evolution of shelters in the late Pleistocene, and how people survived intense cold in the company of mammoths and dire wolves.

Mya: Why are you collaborating with local artists for your event and can you expand on your unique use of storytelling theatre?

Craig: Coming as an outsider, I prefer to bring in local flavors, combining talents. Every storytelling I want to be an experiment, mixing media, adding spoken word to imagery to music. It can only be so scripted when it happens this way. The serendipity we create is always surprising and enchanting, and I’m looking forward to what comes out of it.