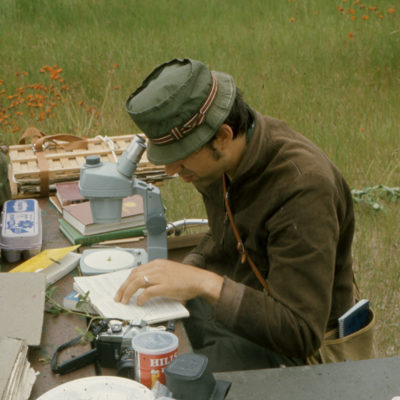 Employed by the Sigurd Olson Environmental Institute under a contract from the National Park Service, I was part of a team of students who conducted an ecological inventory of the Apostle Islands in the summer of 1975. I believe there were five teams composed of five members each that were to conduct an ecological inventory of nine different islands—Basswood, Cat, Ironwood, Manitou, Michigan, Oak, Rocky, and South Twin.

Work included the collection and documentation of the flora and fauna on these islands and entailed detailed field analysis of soils, vegetative growth (density and diversity), trapping of mammals, inland water studies, mapping of nesting and rookery sites, and recording historical land use information and sites of cultural importance.

We were dropped off by boat on a designated island on Mondays and picked up (weather permitting) on Fridays. We camped on the island, packed in our supplies—we drank Lake Superior water and ate a lot of peanut butter sandwiches.

Teams were assigned, designated sample plots to locate and conduct the fieldwork. There was no GPS, no cell phone–we navigated by topographic map and compass pacing off distance from known landmarks to determine sample plot locations. We were paid $4/hour (which was a good summer job wage at the time) and spent weekends on the Northland campus.

We experienced and saw some pretty cool stuff, including the beauty and fury of Lake Superior, abandoned logging skids and equipment from earlier decades, the brownstone quarries that had provided the material for many of the buildings in downtown Ashland, and the historic fish camps, complete with cultural relics of bygone times and saw one of the largest yellow birch trees in Wisconsin at that time.

We were also afforded the opportunity to see the islands as few people will ever see them. Following completion of the work for the Park Service, I was fortunate enough to be part of a smaller team that re-visited Outer Island to conduct a more in-depth study of the land-locked lake on the south end of the island.

As students of the 1970s, we did not have much in the way of cameras, so there are very few photographs of our experiences—those that I do have are somewhat faded but serve to bring back great memories of the people and time on the islands.

Where is he now?

After Tom Dahl graduated from Northland, he attended graduate school in Kentucky, majoring in aquatic ecology. In 1980, he was hired by the U.S. Fish and Wildlife Service and moved to Minnesota, where he spent the next thirty-four years working for USFWS as a biologist on a National Wildlife Refuge, coordinator for the National Wetlands Status and Trends studies, senior scientist for wetlands and finally as chief of the National Standards and Support Team for USFWS in Madison, Wisconsin. He retired in 2014 and now lives with his wife on the north end of the Minong Flowage where he hikes and fishes. He has two kids and two grandkids. Prior to COVID-19, he traveled to South Africa, Central America, the Galapagos Islands, Norway, Alaska, and Hawaii. Professor Lelyn Stadnyk snapped this photo of Professor Dick Verch and student Karen Riva Murray ’75 recording plant taxonomy samples on Stockton Island in the early 1970s. The two researchers along with Professor Bruce Goetz conducted ecological surveys of Stockton Island resulting in a 1974 report.

This is the second in a series to celebrate the fiftieth anniversary of the Apostle Islands National Lakeshore.