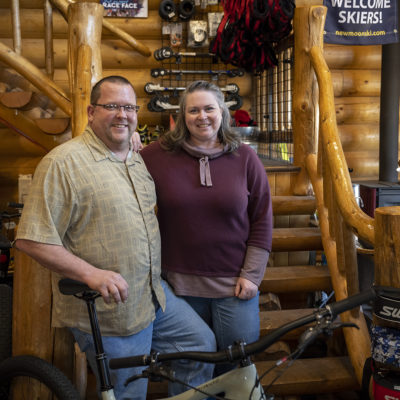 Owning a small business is no small task. Owning a small business focused on selling outdoor recreational gear during a pandemic? Well, that is a whole other story. Chris ’94 and Judy Young ’93 purchased New Moon Ski and Bike Shop in Hayward, Wisconsin, with business partners Joel and Kristy Harrison in 2005, but this year has created successes and challenges like they have never seen before.

Outdoor recreation in Wisconsin has been exploding in the past decade. Instead of slowing this growth, COVID-19 has acted as a catalyst, launching individuals from both Wisconsin and neighboring states into the outdoors.

Like all businesses, New Moon, located an hour south of the College, hustled at the beginning of 2020 to figure out how to operate during a pandemic and within the initial lockdown.

The shop shut its doors but continued to offer online orders and curbside pickup. When lockdown ended in May, however, it was like a cannon went off.

“At that time, we realized it was game on. People just went bonkers with outdoor recreation” said Chris. “We started selling bikes, and then we sold out of bikes. Then we started running out of equipment to repair bikes with. In about a two months’ span we had basically seen an entire bike season.”

Customers took old bikes from the 80s and 90s out of storage and brought them in for a tune-up. Staff filled notebook pages with names of people looking for bikes yet to be delivered to the shop. Chris and Judy took out walls to make larger spaces, installed an air exchanger, and limited capacity in the shop.

“So dealing with that, plus trying to make things as safe as possible took a lot of thought,” said Judy. “We were always having meetings.”

Spring and summer flew by, and winter has shown a similar story. New Moon, whose birth and evolution has followed right alongside that of the American Birkebeiner, has been a key player in Nordic skiing of the Midwest. This past year, seven weeks into ski season and they had already done a whole year’s worth of ski business.

Along with their regular customer base, a whole new group of people seems to be coming out of the woodwork and jumping into the north woods. Entire groups are trying the activities one family member or friend is involved in. People who have not had time to invest in the sports they used to love are getting back on their bikes and their skis.

“[New Moon] really truly lives their values,” said Evan Coulson, assistant professor of outdoor education, who organizes the College’s outdoor recreation and orientation programs. For instance, New Moon has rented gear at extremely discounted rates to the College and even helped the school research the right bikes to invest in, with no expectation of being the one to do the sales.

That investment in local programs—from high school teams, different organizations like Northland, to events as big as the American Birkebeiner— is part of New Moon’s goal to get people outside. “I want people to see our logo and recognize that we are there to help. It’s a lot more than getting that sale down the road, it’s a place to come for help,” Judy said

The effort is rewarding. “I love knowing that people trust us enough to come to see us in northern Wisconsin,” said Chris.

As for the immediate future, Chris said there are still challenges. The outdoor industry is playing catch up, and supply shortages are going to be noticeable well into 2021. Chris said he’s been told by suppliers to order all he will need— he’s unlikely to get more than one chance to order.

If 2020 has taught Chris and Judy anything, it is to be proactive and find the silver lining. Their hope is that this growth in the outdoor industry will stick on a meaningful level. Whether people start spending more time snowmobiling or skiing, biking or running, it doesn’t matter, they said.

“The outdoors is for everyone,” Judy said.