In the world of research, it takes a lot of failures before you get a hit.

For Professor Nick Robertson and four students that hit came the day then-student Ariah Law walked into Robertson’s office and told him a solid substance had formed and wouldn’t come out of the vial.

“I didn’t believe her at first,” Robertson said, and then attempted unsuccessfully to remove it from the vial. “That was a fun day.”

After hundreds of trials, the research team discovered a process for turning byproducts of soap and biodiesel production into a sticky, toffee-like substance that could potentially make useful materials like rubber bands and shoe soles, which are commonly derived from petroleum sources and rubber trees.

Robertson and students, along with UW-Eau Claire collaborators, recently published a paper in the Journal of Applied Polymer Science, revealing the results of their research.

Northland College and UW-Eau Claire received a National Science Foundation award in 2016 to conduct student-intensive research on the synthesis and chemical recycling of plastics. This is the first paper that has been published with the NSF support, though the fourth Robertson and students have published in the area of polymers.

“We’re working on developing a class of plastics, making them more biodegradable and more environmentally friendly,” said junior Dakota Stankowski, a double major in biology and natural resources with a minor in chemistry.

She and Robertson and three other students—all graduated now—started this research with one question: Could they turn a waste product into a useful material?

The soap and biodiesel industries annually generate roughly 1.5 million tons of glycerol as a production coproduct, which far exceeds the current uses for glycerol. Robertson and students focused on using diglycerol to prepare new materials, which is derived from glycerol. 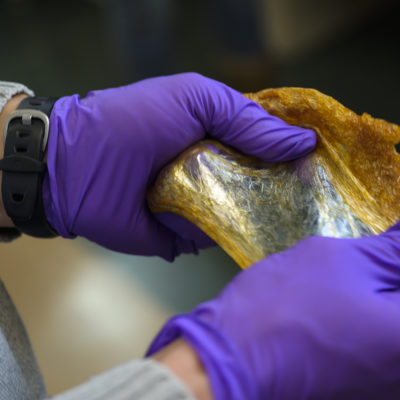 In short, the research group discovered a process for turning diglycerol into an elastomer, a material that can repeatedly bend, bounce, flex, and tolerate those stresses and return to its original shape and size.

Robertson does not anticipate this elastomer would replace critical rubber products like tires but thinks it could find use in lower-grade rubber items like rubber bands.

In addition to the sustainability goals Robertson has for his research with students, he focuses on providing real-world research experience to them. “It’s a lot of hypothesis, trial and error, and involves a lot of failures along the way,” Robertson said. “It’s a central part of my approach to training students.”

Stankowski has spent hundreds of hours since her sophomore year creating, testing, evaluating, and refining the new product. “It has been an amazing process to take this research from an idea to publication,” she said.

“The next step is to develop methods to scale it up, make it more economical, while also further refining the properties to make it  stronger,” he said. “But to go from discovery to a commercial product is a long road, but a potentially exciting one to walk with students.”