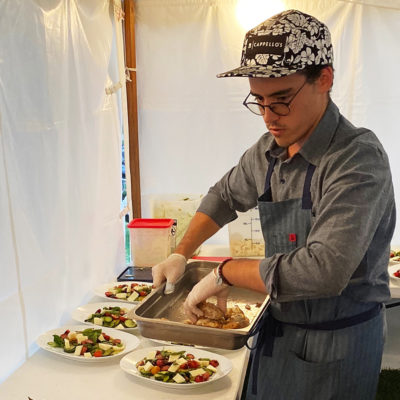 The Impossible Burger, a non-animal burger gaining popularity, is being marketed as the solution to saving the planet. How? Persuade people to stop eating beef, double production annually, win over consumers with an ‘equivalent’ and cheaper product, and eliminate animal agriculture by 2035.

Despite this lofty goal, Impossible is on track—Impossible Whoppers are available at Burger King! As an omnivore and passionate locavore that has significantly reduced my own meat consumption, I don’t see Impossible as the answer.

The Impossible Burger is a far cry from the veggie burgers you might be used to. In an effort to make them taste exactly like beef, it forgoes traditional ingredients like beans, vegetables, and spices for laboratory-created ingredients like textured wheat protein, potato protein, soy leghemoglobin, and soy protein isolate.

Through the free market and consumer choice, Impossible Foods CEO Pat Brown believes his company can save the planet from animal agriculture-driven climate change by coaxing customers away from his beefy competition.

Brown has a point. Americans have a ravenous and unsustainable relationship to meat; we consume more per capita than any other country. The meat-centric diets we enjoy are propped up by cruel animal confinement, government grain subsidies, and overproduction, making processed animal products cheap and widely available.

This kind of large-scale production pushes out small farms, poisons freshwater, degrades soil, and pumps greenhouse gases into the atmosphere.

I grew up in a very “meat and potatoes” family, so I understand how attached people are to meat. I also recognize the necessity to reduce meat production. It’s a cultural dilemma!

Yes, industrial agriculture devotes a lot of resources and energy to feed livestock an unnatural grain-rich diet. But the notion that in order to stop climate change, consumers should switch from beef to Impossible Burgers is pure hubris at best, and places the onus on consumers rather than industry.

What we need is systemic change away from current agribusiness and food policies—ones that promote monocultures, factory farms, and industry monopolies—that created these problems in the first place, and instead develop policies that prioritize regional food sovereignty and regenerative agriculture.

The Impossible Burger, made from commodities in distant laboratories, is part of an industrial model that promotes centralized production and prioritizes corporate profit. This model is structurally incapable of addressing climate change, much less human health and wellbeing.

Conversely, meat products eaten sparingly can actually be seen as a health-giving climate solution when animals are rotationally-grazed on pasture, building healthy soils.

We also need a concurrent cultural shift in the way we approach cuisine. This means reframing the “less meat” conversation from one of loss and depravation to one of expansion, creativity, and opportunity. Perhaps a “veg-more” narrative that promotes whole plant ingredients as aggressively as we have beef.

The need to reevaluate our approach to the food system is urgent—the centricity of meat being a crucial piece of this change. But if we choose the Impossible model, we continue on the same industrial, fossil fuel-driven path that helped cause climate change in the first place.

I truly believe that by creating regional farming models, we foster resilient communities that grow, cook, and eat food together, share skills, vision, and creativity, ultimately capable of political and systemic transformation.

Danny Simpson is the assistant manager of the Hulings Rice Food Center.