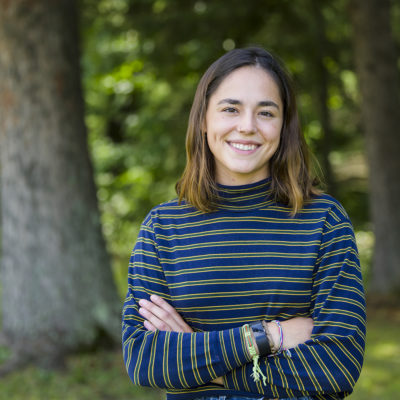 Loons and mallards have little in common. In fact, they are rivals. They are not even closely related as among birds. Loons’ closest relatives are penguins and pelicans; mallards’ are chickens and grouse.

And yet, a pair of loon parents went viral this summer for their decision to adopt a mallard duckling as their own.

The non-traditional family was first observed by junior Evelyn Doolittle, a geology and water science major, who was working as a field research intern for The Loon Project.

The Loon Project surveyed one-hundred lakes in the Minocqua region—five per day. At each lake, they observed behaviors and took notes, filling out data sheets with shorthand for various behaviors.

On the day of the discovery, Doolittle headed out onto Long Lake in her canoe on a rainy, windy day.  She knew a chick might be hatching because the team had noted when eggs were laid. She paddled to a loon nest and found eggshell fragments, meaning a chick was likely out and about.

“I found the pair of loons and I found the ‘chick’ and I recorded in the datasheet that the loon parents had ‘quack-like tremolos,’” she said.

She had never before seen a loon chick and she also recorded the odd coloring of the chick and observed that it rode for an extended time on its parents’ backs and pecked at the brush. She remarked to her colleagues—including fellow Northland student Tarryn Hanson—“wow, chicks look a lot like ducklings.”

Another researcher returned to Long Lake the next week and confirmed to everyone’s dismay, loon parents were raising a Mallard duckling. Piper says he’s never seen anything like this in his more than twenty-five years of researching loons. Besides being natural enemies, loons and mallards behave differently and eat different things.

The loon team hypothesizes the parents must have lost their own chick to a predator and shortly after, came across the duckling, who must have separated from its family.

After that, the team recorded every behavior of the duckling. “We recorded it diving or trying to diving—there would be a big commotion,” Doolittle laughed.

Eating minnows. “Which is strange because ducks don’t eat minnows,” Doolittle said.  “In fact, the photographer had trouble getting a photo because the duckling would eat the minnows so quickly.”

Doolittle says she still gets reports from the team on the loons and duckling—and it sounds like they are progressing as they should. “This is an all-around happy story,” she said.