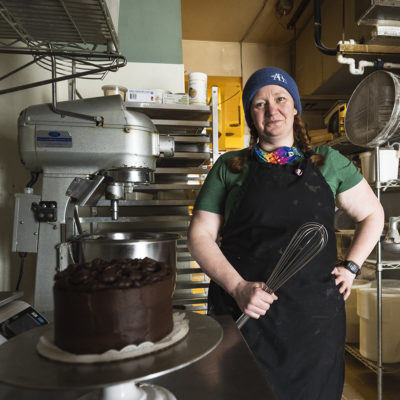 For Kealy White ’99, this past year was one of reflection and redefinition. Of stepping back from her professional duties and leaning into motherhood. In the last year, she’s done more home cooking, skied more, and had more outdoor adventures than ever.

“It’s been nice to slow down, re-evaluate, and have some creative time,” she said, sitting in the back of the Black Cat Coffeehouse masked and six feet away. “The pandemic created the situation for me to reflect and understand that I wanted more quality time with my family.”

The coffeeshop, usually alive with the sound of cutlery and customers, is empty save for an employee in the kitchen and barista behind the bar. The Black Cat has been closed to indoor seating for the last year.

Kealy has been working in this space since she graduated from Northland. She started out baking pastries in the Black Cat in 2000 and then in 2001, she moved across the street to the bakery—specializing in baking cakes and became the general manager of the Black Cat and the Ashland Baking Company.

“Here was a thing I was really good at,” she said. “Sometimes tools in your hand feel good and it was that way with pastry tools.”

In mid-March, the pandemic was national news and the bakery and the coffee shop closed to the public. With so many unknowns, most of the staff was laid off for four weeks. At the same time, Kealy’s seven-year-old daughter Fiona’s school closed, childcare options were limited, and her husband Steve White ’99 was starting a new job. “It wasn’t realistic for me to be at the bakery,” she said.

Instead, she and Fiona started adventuring. They camped in the backyard, biked, hiked, and hung out. “I’ve been a full-time working mom since she was eight weeks old,” Kealy said. “This was our chance—biking riding and sidewalk chalk was totally our jam.”

Kealy clocked backed in after four weeks, working from home at first and slowly returning to the physical building. “Having an employer that valued my perspective and allowed me the space to explore that has meant the world to me,” she said.

Fiona attended virtual first grade in the fall and Kealy and Steve created a schedule so one of them was home every day with Fiona, helping her with school work. Fiona returned to in-person instruction this winter and Kealy increased her time at the bakery.

“I’ve worked less during the pandemic but I’ve also developed a stronger connection to my work,” she said. “For me it has truly been a year of shifting and finding balance that I hadn’t realized I was craving.”