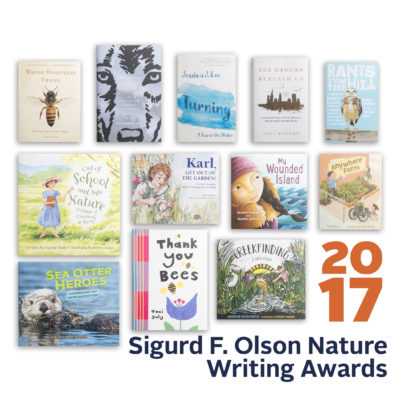 The SONWA committee awarded Where Honeybees Thrive: Stories from the Field by author Heather Swan the top prize in nature writing. “Swan takes an innovative look at the wonders of honeybees and humanity’s complex relationship with them—weaving together stories from scientists, brewers, gardeners, manufacturers, and beekeepers,” said Northland College student Erin Bergen, who serves on the SONWA selection committee.

For children’s literature, the SONWA committee named author Suzanne Slade and illustrator Jessica Lanan for Out of School and Into Nature, a biography of environmentalist, ecologist, and educator Anna Comstock, who was a trailblazer for women in science and for nature education.

“Both of the winning books emphasize the importance of wonder as the foundation for our appreciation of nature and the values that lead to its preservation, said Alan Brew, executive director of the Sigurd Olson Environmental Institute. “As author Suzanne Slade writes, Anna Comstock’s students ‘were fascinated by the wonders around them. . . . And the children became wild about nature!’—that’s everything we hope for in children’s literature.”

In addition to identifying winners in each category, the SONWA reading committees select a book for honorable mention and a selection of notable books.

Where Honeybees Thrive: Stories from the Field, by Heather Swan (The Pennsylvania State University Press)

Where the Honeybees Thrive is a beautifully packaged compendium of art and literature on these iconic pollinators. Taking an innovative look at the wonders of honeybees and humanity’s complex relationship with them, Heather Swan unites tales of scientists, brewers, gardeners, manufacturers, and of course beekeepers with the astounding works of intrepid honeybee-inspired artists. Her book is at once a celebration and a caution: what we have come to rely on so heavily, we stand poised to wipe out. With anecdote and image, Heather Swan gives a fresh face to humanity’s unsung heroes. As the title implies, her work is not a dire jeremiad on the vulnerability of bees. It is a hopeful, community-spanning account of a great human ally: an eye-opening nod to the prolific, overlooked creatures that we have forgotten yet cannot live without. —Erin Bergin, Northland College student and SONWA committee member

The Ground Beneath Us: From the Oldest Cities to the Last Wilderness, What Dirt Tells Us About Who We Are, by Paul Bogard (Little, Brown and Company)

Startling facts regarding the future of our food system along with a roadmap for a more comprehensive way to consider the importance of soil and our role as citizens. —Clayton Russell, retired Northland College professor and SONWA committee member

American Wolf: A True Story of Survival and Obsession in the West, by Nate Blakeslee (CROWN/Penguin Random House)

Few animals have captured human attention so much as the wolf. Revered and reviled, this indomitable creature has shaped us as a race: a lurking threat to our flocks, a barking friend at our side. Modern times have seen these once-prolific beasts consigned to the vagaries of turn-of-phrase and canine heritage, but not so for the wolves of Yellowstone. There, amongst a hotbed of contention and consternation, wolves have begun to reclaim some of their old dominions, given a haven to recover in a park ringed by hostile forces. The success of the Yellowstone Wolf Project has brought many of these charismatic creatures into the public eye, making their triumphs and tragedies a matter of national interest.

In his book American Wolf: A True Story of Survival and Obsession in the West, Nate Blakesdale tells the story of the Yellowstone wolves, crafting a riveting tale of one human endeavor and the powerful, spectacular creatures that upstaged it, gaining fame and notoriety in their own right. It is a tale of hard beginnings, survival, victory, family, love, war, and heartbreak that pulls the reader in from beginning to end, a heady concoction of underdog heroes and bizarrely-sympathetic villains in which the ubiquitous human presence becomes more a plot element than a driver. Reader, scientist, and ranger alike become spectators to Yellowstone wolves’ reestablishment on the American landscape—and all the events that preclude it. —Erin Bergin, Northland College student and SONWA committee member

Rants from the Hill: On Packrats, Bobcats, Wildfires, Curmudgeons, A Drunken Mary Kay Lady, and Other Encounters with the Wild in the High Desert, by Michael P. Branch (Penguin Random House)

Refreshing, surprising, and gloriously funny, Rants from the Hill celebrates the quandaries of human foibles and the pitfalls of living by principle. Via engaging narrative and unapologetic humor, Michael P. Branch confronts intimidating issues with witty candor and flounces past liberal, environmentalist mores with a cheerful swig from a whiskey bottle. In rebellion against the typical, prosaic pessimism of environmental writing, this book is neither a eulogy mourning perfection lost nor a jeremiad railing on stewardship neglected. Rather, it is the collected experiences of a cantankerous, intelligent, well-intended man striving to live an environmentally conscionable life in one of the most fearsome habitats on Earth, all whilst raising a family, indulging his humanity, navigating an idiosyncratic southwest community, and maintaining house and home. It’s every bit as messy and hilarious as he is. —Erin Bergin, Northland College student and SONWA committee member

Turning is a lyrical memoir truly exemplifying the spirit of human connection with nature. The author’s yearlong daily dips in the waters near Berlin, Germany serves as a journal of the style of Aldo Leopold but steps into a more recently articulated dimension. The people of America experience more depression and anxiety than the citizens of any other developed country. Human disconnection is a major factor. Lee captures the depth of her reconnection and recovery. It is a book work considering. —Jan Penn, SONWA committee

Out of School and Into Nature, by Suzanne Slade, illustrated by Jessica Lanan (Sleeping Bear Press)

Anna Comstock was an environmentalist and ecologist who loves nature so much that during a time when women are supposed to get married instead of an education, she makes the bold decision to attend Cornell University. She writes a Handbook of Nature Study and is a trailblazer for other women wanting to study science. Who says women can’t do the same things as men? Anna defies all expectations and instead follows what she wants to do.  This children’s book tells her story and sets an example for young girls and women alike.  —Kyra Saige Thornley, Northland College Student and SONWA committee

For a farm or a garden, wherever you are, you only need a person and a seed to make your anywhere farm. Muted colors and a bit of rhyming, make this book a fun read for a young child but the message is for everyone. A farm doesn’t just mean a big field in the country. One can grow green things almost anywhere – an empty lot, a pan, or a bucket are just a few things that will do. Add soil, sunshine, water, and care for your anywhere farm. The warm artwork and the diverse neighborhood work together to elevate the message. —Beverly Bauer, former bookstore owner and SONWA committee member

Across the expanse of America, the pre-settlement character of the country has been altered and is almost impossible to envision. In this true tale, Mike’s keen eye sees past the current day cornfields of the driftless region of Iowa to the historic trout stream and the ecosystem that existed. The story teaches the age-old process of discovery for the young reader and the restoration of the natural world. —Jan Penn, SONWA committee

Karl, Get Out of the Garden: Carolus Linnaeus and the Naming of Everything, by Anita Sanchez, illustrated by Catherine Stock (Charlesbridge)

Grades 3-5. Karl most definitely did not get out of the garden! This accessible and well-written book tells the inspiring story of the 18th century Swedish naturalist, Karl Linne (later Carolus Linneaus), who was able to develop his childhood fascination with plants and insects, his early explorations in the natural world beginning in his family’s backyard, and later his practical need to know as a doctor which plant was which in order to treat his patients, into a much needed, simple and clear system of nomenclature for identifying and classifying living things that revolutionized science worldwide. This book illustrates beautifully how our direct experience with the natural world and our interconnectedness with plants and animals are not only delightful pastimes but can also literally be the roots of our most inspired inventions.  Stock’s expressive and colorful pen-and-ink and watercolor illustrations fit well with Karl’s adventurous field trips into the garden, woods, and meadows. —Demeris Brinton, owner of Apostle Islands Booksellers and SONWA committee member

Grade 1- 5. My wounded Island introduces the effect of climate change on Sarichef a small island near the Arctic Circle.  The Inupiat people who inhabit the island have moved their small wooden homes to the center of the island because of rising sea levels.  Imarvaluk, a young girl on the island pictures the sea as being a bewitched evil creature devouring the land of the island.  She and her grandfather wonder what will happen to the people and their traditions if they are forced to move to the mainland. —Eileen Van Pernis, SONWA committee

This book is an account of the scientific journey marine biologist, Brent Hughes, took to discover the interdependent relationship between healthy seagrass beds, extraordinarily surviving nutrient-polluted waters, with an unexpected hero, the sea otter. Filled with facts about sea life and the scientific process, the main message for readers is that a vital ecosystem is dependent on all species (plant or animal, top or bottom of the food chain) coexisting, and the removal of one could mean the demise of another. —Chris Lindsey, retired children’s librarian and SONWA committee member

Toddler to Grade 1. This simple book delivers a powerful message about enjoying nature, appreciating the environment and the interconnectedness of our ecosystem. Written for young children, this book creates the opportunity to discuss the wonderful gifts in nature. The paper collage illustrations add to the experience of this book. It is truly a celebration of the importance of gratitude for our world. —Eileen Van Pernis, SONWA committee