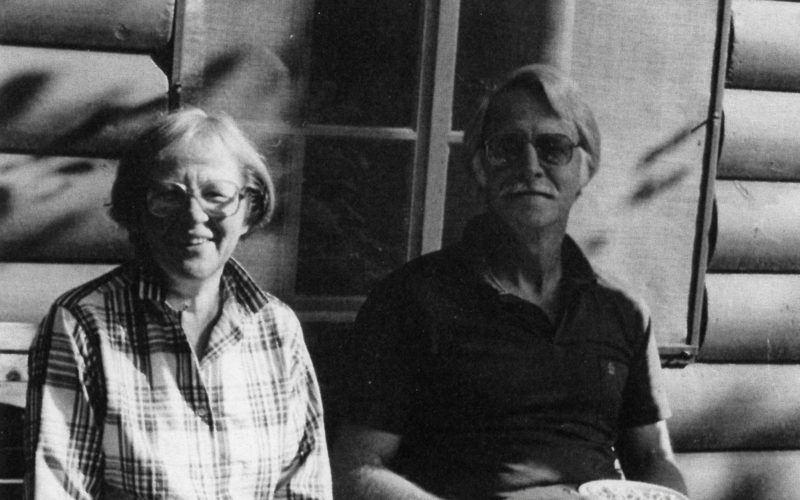 About the time Sigurd F. Olson was crafting his first book, The Singing Wilderness, Donna Arbaugh and her new husband, George, were building a summer place near the Boundary Waters. It was 1954 and using only hand tools, they built a small, off-the-grid cabin on a lot they leased from the government for $50 per year. “Newlyweds can afford that,” she said during a phone conversation from her home in Tacoma, Washington.

In the early years, the couple lived in Iowa City where George attended graduate school and Donna taught third grade. Afterward, George took a position as a philosophy professor at Pacific Lutheran University while Donna worked in administration and raised a gaggle of boys. Summers were always for the cabin.

“For a few years, we had three boys, two small dogs, and Charley the cat all in the station wagon,” she said. “No wonder we drove straight through for thirty-six hours, taking turns driving and sleeping for two nights and a day.”

George died eighteen years ago, but Donna still stays at the cabin for four months every summer—even last summer during the pandemic. “I go back [to Tacoma] and people want to know if I’m happy to be back and I say, ‘no,’” she laughed.

Donna heard Sigurd Olson speak a few times in Ely, and her interest in him and his philosophy has grown through the years. Her acquaintance with people at the Listening Point Foundation, an Ely nonprofit dedicated to preserving Olson’s Listening Point cabin on Burntside Lake, led her to Northland College and the Sigurd Olson Environmental Institute.

Because of her life in academia and teaching, she was intrigued by Northland’s unique environmental liberal arts mission and its commitment to cultivating environmental leaders who are grounded in the liberal arts. “I’ve always been into environmental issues,” she said. “Over the years, I got even more involved.”

In 2009, Donna established the Arbaugh Endowed Scholarship at Northland College. The scholarship aids a junior or senior majoring in a field focused on environmental studies or sustainability, and twelve Northland students have received the scholarship.

The 2014 recipient, Carissa Hudson, of Greenville, Texas, who majored in natural resources and was a research assistant in a plant ecology lab, wrote: “Attending Northland has opened so many doors for me and I too strive to walk in the footsteps of Sigurd Olson.”

For example, she intends to establish the Arbaugh Singing Wilderness Endowment through a gift from her estate. The endowment will provide on-going financial support for activities of the Sigurd Olson Environmental Institute, including internships and fellowships that help create the next generation of environmental leaders.

Donna was able to visit campus in the fall of 2007 to attend a talk by David Backes, author of A Wilderness Within: The Life of Sigurd F. Olson. And last year, she attended a graveside memorial service for Bob Olson, Sigurd’s son, in Seeley, Wisconsin.