This is the second installment of From the Archives. To read about the Institute’s first advisory board, read the third installment. 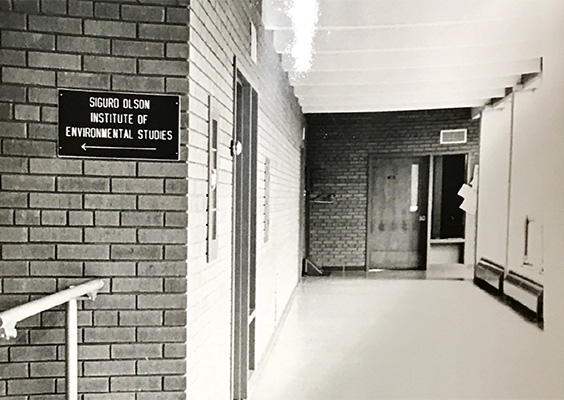 In its early days, what was then the Sigurd Olson Institute of Environmental Studies was based in Bobb Hall. The basement, to be specific.

Bobb Hall was one of Northland College’s main academic buildings at the time, and many faculty and alumni passed through its doors in the time it stood on campus. Co-founder and Executive Director Bob Matteson spent countless hours in this space, shepherding an advisory board and collaborating with the College’s Environmental Studies Committee—then chaired by longtime Professor of Geology Bruce Goetz. While it may have been a humble workspace, it was still a corner office, and it boasted one short window to the world outside.

It was from Matteson’s desk in this space that “The Institute Brochure” came to be. This eighteen-page publication, which features faculty from the era like Goetz and Dick Verch, served as a prospectus for the Institute, and it includes a statement of philosophy attributed to Sigurd Olson: “the enhancement of life in our beautiful northern region” and “the encouragement of practices that… protect and preserve the unique character of our homeland here in the North.”