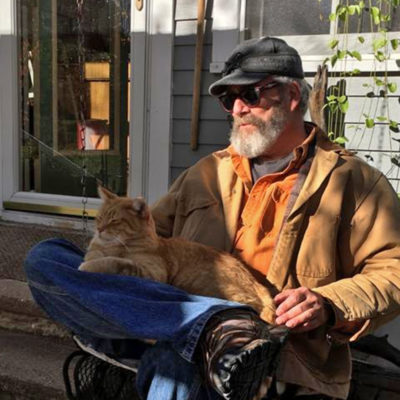 If one were to write a People’s History of Northland College the first chapter would probably feature Newton Bobb and Joseph Brownell. But the second chapter would begin with Tim Doyle ’84. Tim’s relationship to Northland covers four decades, first as a student and then as a professor of philosophy and religion from 2000 until his retirement in the fall of 2020.

During his teaching tenure, Tim provided the College’s liberal arts mission with the essential discipline of philosophy, implementing Northland’s philosophy minor. His range of interests extended beyond his expertise in the philosophy of language as he taught courses in environmental ethics, aesthetics, logic, the philosophy of science, as well as Buddhism and Japanese aesthetics. His work on Wittgenstein, with German philosopher Hans Julius Schneider, and his development of Zen garden spaces are notable achievements as well. He influenced generations of students in the disciplines of critical thinking, and how one might apply those skills to living a meaningful life.

As a student, Tim arrived at Northland in a circular fashion. His early youth in Massachusetts included a passion for the outdoors, bicycling, and catechetical skepticism. But, before enrolling as an older college freshman, he went to work as a union man on a railroad. During his first year at Northland he found his way to Mead Hall, the dorm for “smart hippies,” according Janet Bewley, the student dean of that era.

Tim’s roommate, Andy Noyes ’84, still talks about “the wow of now” that characterized those student years. “That’s the resonant experience of hanging with Tim,” said Noyes, adding, “It’s powerful stuff! Tim inspires that in his friendships and students with a high standard for all around. It’s all A-game.”

Tim shared that Mead Hall room with his avatar Floyd E. Queeb. Queeb hagiography continues forty years later. To this day, Northland professors notice a significant drop in attendance the last week of October, and 10/28 has become sacrosanct for contemporary students and alumni alike. College presidents, students, even professors come and go. Queeb remains. How’s that for a legacy?

Tim Doyle was also a serious student. A conversation with Tim regarding his student years begins with a tribute to his professors, especially Tom Kasulis and a visiting professor named Mike Fitzgerald. Studying Buddhism with Kasulis, and analytic philosophy and logic with Fitzgerald, Doyle reflects on his own turn to college teaching at Northland: “Having received an amazingly high-level education in philosophy at Northland, I wanted to make sure that students continued to be able to get the kind of education that I had received there.”

Tim’s influence on his students evokes the same kind of gratitude. Scott Wold ’09 notes, “Tim was a force of nature in the classroom, more than just a professor. He is a lifelong mentor who cared deeply about his students.” Wold remarked that Dr. Doyle brought out the best, “because I did not want to disappoint him with a late or poorly thought-out paper.”

Another former student, now teaching at Northland, Stacy Craig ’04 commented, “It was empowering to learn philosophy, the depth of an argument, and how one’s positions manifest our values and ethics.”

As Tim approached the fall of 2020, he realized that his battle with recurrent cancer had taken its toll, so he announced his retirement. The following months have been kind to Tim. He has experienced a reprieve from the debilitating pain that he hid from his students the past year. Now, he spends the days on his small homestead farm near the south shore of Lake Superior.

Arriving at his home at 10:28 on a lovely fall afternoon, I find Tim waiting on his portico, with his cat, Caruso, purring on his lap. The pulsing waves of Lake Superior provide the background music as we look out over his flower gardens toward the meadow and forest beyond. He talks of appreciating the “pure, aesthetic joy of nature,” of listening to the owls, coyotes, waves and wind, of quiet evenings with friends around his campfire. When asked how he is doing, Tim replies, “I am more present in what I am doing.”

As I leave his generous, little farm in the late afternoon light, I become aware of a sense of contentment, a kind of at-peace-with-the-world, and I hope this lasts for Tim, as for us all. May we all find a measure of gratitude for students and teachers and colleagues like Tim Doyle, and contentment for good work and abiding friendships.