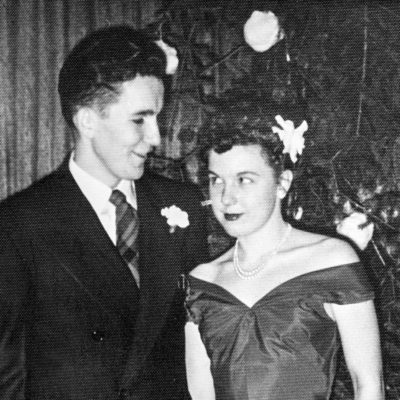 As a freshman, Carol McLean met her future husband, Don Buckman, in the College print shop. Don worked downstairs in the copper shop. It was 1947. Don graduated in 1950; Carol in 1951.

They married two years later in St. Paul. Carol worked at the University of Minnesota as an editorial assistant in the printing department while Don went on to get his MA in education administration. He taught sixth grade for a few years in Richfield, a suburb of Minneapolis, then spent the rest of his career as a principal at two different elementary schools.

Carol and Don bought a vacation home retreat in 1957 on Gull Lake. With sixty-eight acres of forest and 2,200 feet of shoreline, they spent many weekends there, operating a camp for boys age nine to fifteen. “But when Don became principal, our summers were too short to continue the operation,” Carol said.

The outlet of Gull Lake flows through the Buckman’s property and eventually into the Namekagon River. The property includes wetlands and uplands with a variety of trees, wildlife, and wildflowers. They collaborated with the West Wisconsin Land Trust, a nonprofit organization working to preserve open spaces and farmlands, to place a conservation easement on their Gull Lake property.

In 2012, the Buckmans, now in their eighties, knew that they could no longer maintain two homes. They contacted Northland College and asked if the College would be interested in the Gull Lake property.

“Northland was important to us,” Don and Carol said. “We received help through work opportunities and scholarships—our intention is to give back and give forward to help others there.”

“We feel fortunate to have the property in good hands,” Carol said. “The College and their choice of the future owner will allow the preservation of a very special piece of land—they will work with the West Wisconsin Land Trust to make sure that this is so.”

Part of the proceeds from the sale established the Don and Carol Buckman Endowed Scholarship. The Buckmans have also included the College in their estate plan and those funds will ultimately be added to the scholarship fund.

“We are very appreciative of this creative gift from Don and Carol,” said Margot Carroll Zelenz, vice president of institutional advancement. “This is a gift that meets their needs, makes a legacy gift to the College, and benefits Northland students now and in the future.”