I first met my husband at a Sunshine bike build. It was a warm September evening during my first week as a Northland freshman. A dozen or so students were beginning to assemble bikes from piles of parts laid out in the garage. In the yard, a variety of chilis and corn breads sat on a well-loved coffee table next to an even more well-loved plaid couch, upon which Pete sat. He was the first person I spoke to that evening, reaching out our hands in introduction.

As a barely out queer guy in a small college in a small town in northern Wisconsin in the early 2000s, I wasn’t expecting to meet a boyfriend, let alone husband. The irony isn’t lost on me each time I think back to that evening when I first looked into the eyes and shook the hand of the man with whom I’ve come to share a life.

I studied writing at Northland with a minor in biology. I learned how to compose a sentence and what it meant to be liberally educated in the most traditional sense: to be encouraged to follow your curiosities toward new insights that unveil human mysteries both highly universal and deeply personal.

While learning how to explore the natural world of the northland by paddle and foot, I also learned how to explore an even greater wilderness of ideas, my curiosity leading me toward the mysteries of identity, gender, sexuality, and power. As I was slowly and stutteringly falling in young love with Pete, I began the long journey of understanding what it means to be a queer man in love with another man, what it means to come of age in a time of massive anthropogenic global change, and what it means that one of my deepest longings was to go out into the wildlands of a yet wild world.

Northland, for me, represents the period of time when I began the long journey of integrating each of these inquiries into the shape of a single life lived well.

Nearly twenty years after that fateful Sunshine bike build, Pete and I are still journeying on together from one horizon to the next. We’ve survived many adventures, weaving in and out of the paths of our dear Northland friends who have been on their own journeys of discovery and understanding.

After five years of working seasonally as park rangers across the west, in 2011, we embarked on a summer-long canoe trip covering all 1,800 miles of the Yukon River. At the end of that trip, Pete proposed. 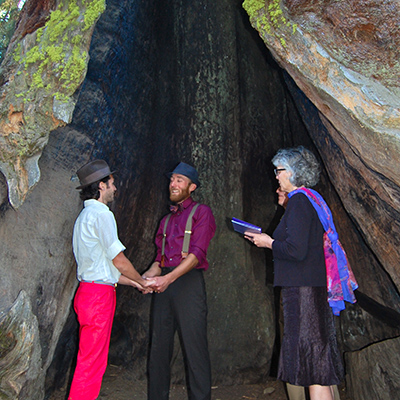 A scene from the wedding of alumni Alex Johnson ’08 and Peter Mueller ’06 inside a giant sequoia tree.

In 2013, we threw a big illegal wedding in Paradise Valley of Montana with many Northlanders in attendance, and after Proposition 8 was overturned in California the next year, we legally married inside a living Sequoia in Yosemite National Park while working as wilderness rangers. We’ve built a homestead together at the feet of the Rocky Mountains in Colorado, circumnavigated and summited various mountain ranges, weathered a tropical storm in a tent in Hawaii, and been woken up to earthquakes in our bed in Alaska.

I’ve been fortunate enough to follow the same lines of discovery I first began in earnest at Northland. I’m still trying to tell stories and put names to our shared human experience of living in a very queer world as it’s changing every day. Telling those kinds of stories is difficult work that, as the years go on, often looks less like writing as it does living in right relationship—with my husband, family, friends, and all the others, human and non-human, whom I depend upon daily. Call it queer ecology if you’d like, or environmental justice, or being a good ancestor, perhaps, though none quite fit completely.

For the sake of this story, I will leave out the dull banality of what it took for Pete and I to get here to this particular moment. Pete and my lives feel more pedestrian lately, despite what my social media channels might make it appear at times. Even so, my story became far brighter thanks to that first Sunshine bike build and the man I met there. Neither Pete nor I built bikes that evening, but we found enough sunshine to light up a life together.

Alex Carr Johnson ’08 is a conservationist and writer who lives on the ancestral lands of the Dena’ina people in Anchorage, Alaska, with his husband, Peter Mueller ’06. Alex currently serves as the Alaska senior program manager for the National Parks Conservation Association, working with tribes and land advocates to protect the Western Arctic Caribou and Kobuk and Koyukuk watersheds from a proposed mining district.