Tim Carpenter ’74 led the way up the steep portage carrying a canoe on his shoulders. We were on a trip in 1972 through the Boundary Waters with Geology Professor Bruce Goetz for his five-week class Geology of Lake Superior. We had planned to go to Isle Royale but the ice stayed late that year so here we were, a merry band of campers—Camp Northlanders—paddling and portaging through one of America’s wildest places.

“This is where the highway will go,” Tim said with a chuckle, referencing Northland’s motto from Isaiah 35:8 in the Old Testament of the Bible—“And a highway shall be there.”

The last time I saw Tim was on Big Twin Lake in 1985. He was one of more than a dozen state wardens standing as the thin gray line between more than one hundred angry protestors and a small group of Chippewa fishermen exercising their treaty rights. I was there reporting as the editor of the Rhinelander Daily News. Tim died in a car accident in 1989, and Northland established the Tim Carpenter Memorial Scholarship.

I couldn’t know it then, but my decision to go to Northland and the experiences I had here fifty years ago led me into an environmental career I could never have dreamed of. It was classes like Bruce’s, where I got to test myself in the wild, or Lee Stadnyk’s ecology class that elevated me intellectually. I first heard about the Greenhouse Effect in a freshman class with Kent Shifferd.

When I covered an Apostle Islands tour of Senator Gaylord Nelson, Interior Secretary Cecil Andrus, and Congressman David Obey in 1979, Park Ranger Rich Stavdal ’77 showed us Devils Island. In 1988 when I covered a huge firestorm in Yellowstone National Park, Rich walked out of the smoke, now a ranger at Fire Island in New York, on detail to Yellowstone. I remain close with many classmates. 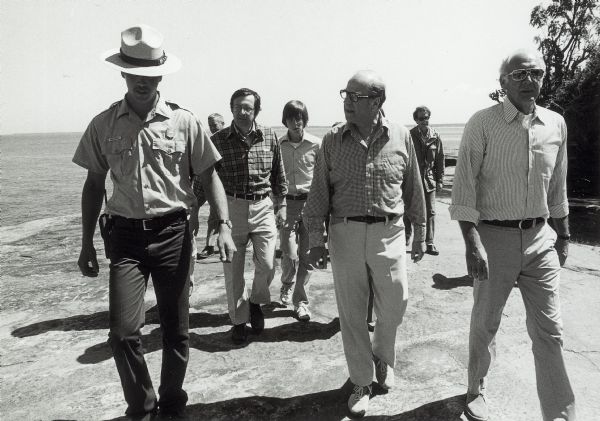 Congressmen, a National Park Service ranger, and the Secretary of the Interior are led along a beach one one of the Apostle Islands during a tour of the newly established National Lakeshore. 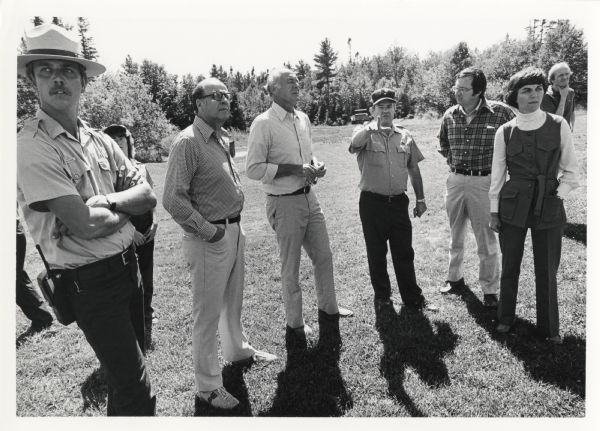 It was the extracurricular activities that opened my eyes to the opportunities before me. I hitchhiked to Madison in March of 1972 to attend a meeting of the Wisconsin Resource Conservation Council as a representative of the group Stop Sanguine, which was fighting a Navy communications project in the north woods. There, Martin Hanson took me under his wing, introducing me to the Democratic candidates who were running for president. Hanson, one of the most influential conservationists ever in Wisconsin, became a lifelong friend and mentor.

As a sophomore, I was appointed to the faculty-student advisory committee of the new Sigurd Olson Institute. This got me an invitation to the cocktail party at Malcolm McLean’s house before Sigurd Olson’s landmark speech kicking off the creation of SOEI. I got to meet Sig and his wife Elizabeth and spoke to them several other times before I graduated. He has been my guiding light since.

But I probably wouldn’t have even considered journalism as a career had I not taken Maryann McGeehan’s Environmental Journalism class my senior year. She got Washburn Times editor Edith Merila ’72 to let Jeff Wilson ’79 and me write a weekly column, and I’ve been writing ever since. 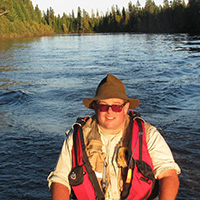 Rocky Barker ’75 retired as a reporter and columnist from the Idaho Statesman in 2018 after fourty-three years in journalism. His career took him all over the United States and Canada to Russia’s Far East, China, Africa, and Hawaii. He was part of a team that were finalists for the Pulitzer Prize and awarded the National Wildlife Federation’s Conservation Achievement Award and The Wilderness Society’s Aldo Leopold Award. He is the author of two books and coauthor of two others. He served on the Sigurd Olson Environmental Institute Advisory Council and the Northland College Alumni Board of Directors.