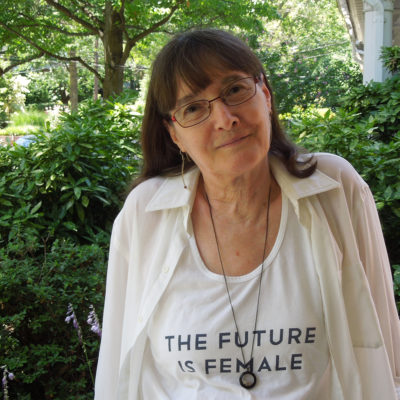 Why shouldn’t a girl have a pair of sneakers? That’s the question Dr. Patricia E. Ortman ’71, a Washington DC-based retired women’s studies professor and artist, pondered in 2006 before she founded the Girls Gotta Run Foundation, the only nonprofit organization in Ethiopia using the national sport of running as an innovative approach to creating safe spaces, ending child marriage, and expanding access to secondary school for vulnerable girls.

Ortman was inspired to start GGRF after she read a 2006 article in the Washington Post describing the lives of teenage girls in Ethiopia who enter into early marriage, multiple pregnancies, and manual labor, sometimes starting as young as twelve. The article also reported that many young women long to run competitively. The would-be runners interviewed by the Post ran early in the morning, before starting their chores—and often did so barefoot because their parents couldn’t afford sneakers.

“Something about that just made me think, ‘Well, it’s just a pair of shoes,’” Ortman told a reporter later. “There should be a way to get these girls some shoes. It didn’t seem like an overwhelming thing.”

Girls Gotta Run Foundation continues to cultivate projects that empower Ethiopian women runners, their families, and their communities and help them reach their full potential.

Ortman has made a life of educating and empowering young women.

She majored in English and education and minored in history and German at Northland College.

“It was at Northland that I not only learned an enormous amount academically, but I learned that I was a leader,” she said. “I helped to create the Northland College Student Association, which became known nationally as a model for other schools, and led the organization of our campus’s mobilization against the Vietnam War and other important causes.”

After graduation, she moved to Washington DC and landed one of the only teaching positions in the entire metro area—in the middle of a school year when a teacher abruptly quit at a high school in Charles County, Maryland, “a relatively new school that had been built to replace and combine the two segregated high schools in that area,” she said.

She was chosen to participate in a revision of the county’s high school English curricula and so, expanded the texts to include works by women and people of color. “I also did my level best to expand the consciousness of both students and faculty and administrative colleagues concerning discrimination against women and girls in whatever ways I could,” she said.

She received her master of English education from George Mason University in 1977; and her PhD in human development/developmental psychology from the University of Maryland in 1987 and was immediately was hired by Mount Vernon College, a small private women’s college in Washington DC.

She was the first to teach Psychology of Women and Gender, a course that had been created and approved by a retiring professor, but not yet taught. “That course was life-changing for both me and my students, as well as undoubtedly for many of the people in our lives,” she said.

She provided leadership and helped develop and get approved a new required multicultural, interdisciplinary core course sequence for all undergraduates, a core program which was carried over by George Washington University (who annexed Mount Vernon in 1999) as a one-year program known as the Women’s Leadership Program, “preserving Mount Vernon’s legacy and providing crucial experiences for many students who have gone on to put their knowledge and skills to very good use,” she said.

Ortman retired in 1999 to pursue her other passion—art—and started the Girls Gotta Run Foundation in 2006.

This past November the Mount Vernon College Alumnae Advisory Board of George Washington University presented Ortman the Elizabeth J. Somers Educational Leadership Award for both her work while at Mount Vernon and in starting and growing the Girls Gotta Run Foundation.

In her remarks at the award ceremony, Ortman concluded:

“Unfortunately, the political and social backlash to progress in empowering and enfranchising marginalized groups—including women and girls—is an ongoing phenomenon. Especially since the great leaps forward of the sixties and seventies, we have seen it creep forward to erode and fight against advances of all kinds.

This seemed to culminate in the 2016 presidential election, so programs like the Women’s Leadership Program and worldwide efforts to educate and empower girls and women, like the Girls Gotta Run program for girls in Ethiopia that I and my husband co-founded are more important than ever.

And the backlash to the backlash, as evidenced by the national and international women’s marches that took place the day after the inauguration [of Donald Trump] and the surprising and delightful results of the 2017 November elections, is encouraging.

It seems that many people, perhaps especially women, who had been far too complacent or lethargic for far too long are now getting busy, and that is crucial because we no longer have the comfort of a president who will safeguard things for us like the elimination of the global gag rule or efforts to subvert women’s reproductive rights or to promote legislation banning violence against women.

“It is time for everyone who believes in equality and justice to get and stay active in the fight. So, if you haven’t yet, I say get busy! And if you have, thank you for your work.”