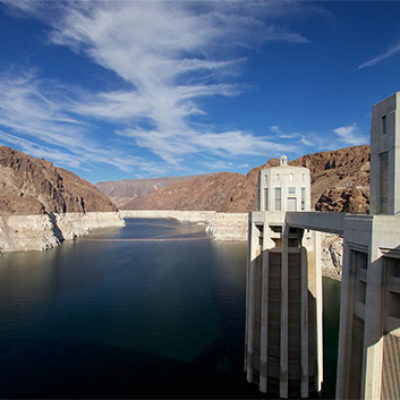 Lake Mead, America’s largest reservoir, is a lifeblood for 25 million people in the Southwest. But for the third time in six years, it’s about to hit a record low. Water levels have fallen more than 140 feet since 2000, leaving the reservoir only 36 percent full.

Today, Mead is rimmed by a broad white bathtub ring marking how far water levels have fallen during the Colorado River’s 22-year megadrought. The Bureau of Reclamation says the new low record will be set on Thursday, a sober climate-change milestone.

Mead has always managed to bounce back from prior lows. But the Bureau’s latest 24-month forecast shows the reservoir stubbornly staying in record territory through year’s end. That has never happened since Hoover Dam was built in the 1930s.

Hence, the federal government is expected to declare an unprecedented “shortage” on the river this summer, prompting mandatory water cuts, especially in Arizona. “This is a day we knew would come at some point … and we’ve been preparing for this moment for at least a couple of decades,” said Ted Cooke, general manager of the Central Arizona Project, which delivers Colorado River water to 80 percent of the state’s population.

Cooke and others continue to push for more conservation. Perhaps no conservation effort is more telling than the water cops in Las Vegas. During a ride-along last month, I watched water waste investigator Perry Kaye nab four homeowners for illegal lawn-watering in just 50 minutes. Nevada is a weird place. Prostitution is legal. Weed is, too. But midday lawn-watering can bring an $80 fine.

Vegas doesn’t want the money. Officials would rather pay homeowners to swap their grass for desert landscaping. “If the only person walking on that grass is the person pushing the lawn mower, it should go,” declared Colby Pellegrino, with the Southern Nevada Water Authority. Last week Nevada even passed a law banning grass, in some areas, by the end of 2026.

To read the full article, visit the Washington Post.