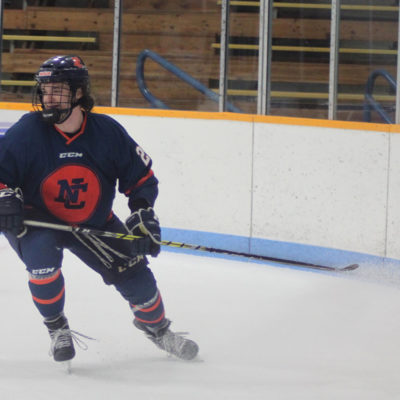 A native of Rochester Hills, Michigan, Christopher T. Morgan, or Miggy as he was known on the ice, skated two seasons at Northland before he was killed in a tragic hit-and-run August 2017. “When it first happened, I thought, we can’t let anyone forget him,” said his mother Caroline.

She and her husband, Tom, created an endowed scholarship at Chris’s high school, the University of Detroit Jesuit High School. Inspired by the overwhelming response, they talked to Seamus Gregory, Northland’s head men’s hockey coach, about doing the same at Northland College. “We want to support Northland and the game Chris loved—hockey was his whole life,” she said. “Fitness, practice, nutrition, he loved being with teammates.”

Chris Morgan started playing hockey at the age of five with the Mighty Mites and in high school, he played as did his two younger brothers—Matt and Tommy. “Our family rule was, ‘Take care of your brothers,’ and Chris did just that,” Caroline said.  “Whether it was Matt and Tommy or his friends or teammates, Chris took care of his brothers and sisters.”

Chris went on to play juniors with Gloucester Rangers in the Central Canadian Hockey League where “somehow Seamus found him,” she said.

Seamus Gregory had a close relationship with Chris’s former family advisor from Endeavour Sports Group, Mike Pilon. “Our 2015 recruiting class was shaping up, but we were still in need of a left-handed, shutdown defensemen and Chris was the perfect fit: big, tough, and could win battles down low, just what we needed,” Gregory said.
Caroline says Chris had found his people and his place at Northland. “He was really connecting there, enjoying his time being on the water, being by the bay, getting more exposure to the outdoors. He really appreciated what he had there,” she said. “Chris found the love of his life at Northland, and he found salt-of-the-earth teammates and friends in his hockey and lacrosse teammates (he played in Northland’s inaugural lacrosse season).”

After Chris’ death, Seamus wrote, “Chris was a true LumberJack—hardworking, dedicated and passionate. He will be missed by everyone in our locker room, the athletic department, the campus community, and beyond. Chris was a competitor, an unbelievable teammate who believed in LumberJack Hockey. . . . The best way to describe Miggy is he would block a shot for anyone, anytime, up by three in the first period or down by five in the third, it didn’t matter. He will forever be missed, never forgotten, and always loved.”

Caroline and Thomas have raised $12,484 through bowling fundraisers and generous donations from friends. They are halfway to their goal of $25,000, the minimum needed to endow the scholarship. They hope to broaden their reach with this article and go beyond the minimum. The more money raised, the more scholarship dollars will be available to students.

Gregory retired Chris’s hockey jersey, number 27, and he named the annual hockey award the Chris Morgan Memorial LumberJack Award. This award is given to the team’s most dedicated player as voted on by their teammates. Chris won this very award as a senior in high school which made this award so meaningful. Caroline and Tom have traveled the last two years to give out the award.

The 2020 recipient was senior Kyle Pouncy, Chris’s partner on defense.

“Part of what helps me walk this walk is building his legacy,” Caroline said. “That’s not my whole life—I have Matt and Tommy to nurture. But the energy that went into taking care of Chris before now goes into growing and nurturing Chris’s legacy.”