Researchers at Northland College are trying to find ways to limit riverbank erosion that turned Chequamegon Bay to muddy soup after June rainstorms that dumped over 14 inches of rain in some areas of Bayfield County.

The project on North Fish Creek is being coordinated by water scientist Matt Hudson of Northland’s Mary Griggs Burke Center for Freshwater Innovation. It is funded by the Great Lakes Restoration Initiative and began in 2013.

Hudson and his team are trying to slow the flow of water through the creek to protect its bluffs, which can crumble and collapse during severe storms.

That has had a direct economic impact on area tourism-related businesses. One of those is the sports fishing charter service operated by Ashland resident Dave Sorenson.

“Like a lot of my comrades, saw a severe drop in business because of the massive runoff and the detours. People stopped coming up,” he said. “It’s slowly coming back for the past couple of weeks, but it was a major, major economic deficit to the area.” 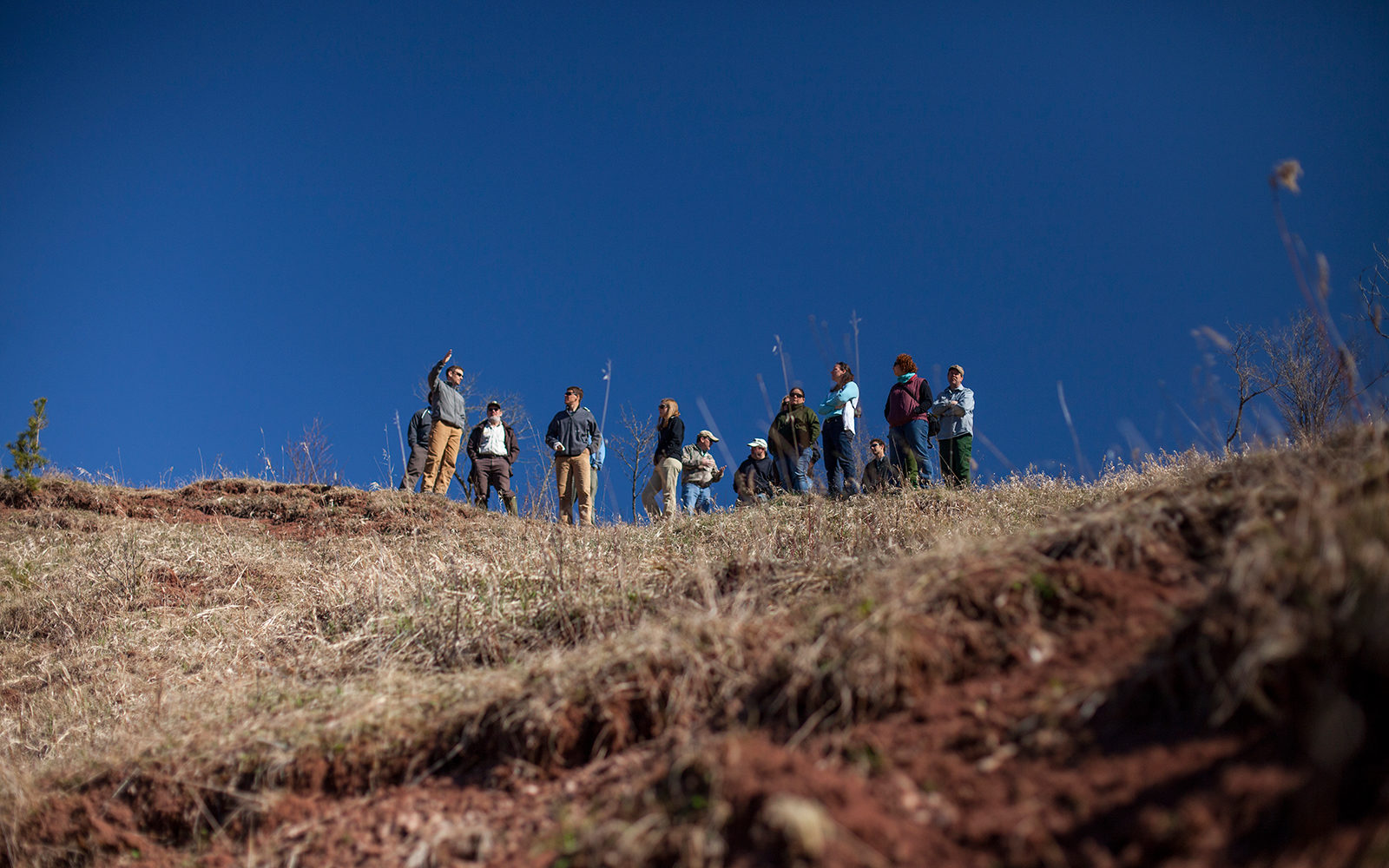 The project seeks to use two main efforts to reduce the amount of sediment moving downstream. The first is collecting water and slowing its discharge into the creek, reducing the intensity of water flow that leads to bluff erosion. The second involves protecting bluffs to help prevent them collapsing and dumping dirt into streams. That effort is focused on one area in particular.

“The north fork of Fish Creek is the main the sediment contributor to Chequamegon Bay,” Hudson said.

Hudson said scientists have been trying to learn why Fish Creek erodes so badly since the late 1980s.

“A lot of it was tied to the question of why the bay turns red, but more importantly, to the fact that there should be a lot more trout and other fish in Fish Creek,” he said.

Hudson said the problem dates back to the region’s lumbering days when loggers cut trees right to the banks of the river and built temporary dams to hold logs. When the logs were ready for market, the dams were removed and water and logs rushed downstream to mills.

“That tears all the natural fish habitat and straightens out the stream,” Hudson said. “We are still living with that today.”

Studies done by the U.S. Geological Survey show that the key to cutting runoff is limiting it in the stream’s headwaters.

The other factor is stabilizing about 15 to 20 large eroding bluffs that line North Fish Creek.

“That’s where two-thirds of that sediment is coming from,” Hudson said.
The area that is most prone to erosion coincides with the old beach line of glacial Lake Duluth, Hudson said.

“You’ve got clay and sand intermixed and it’s in really steep areas, so it is naturally susceptible to erosion,” he said. “And when you remove all the trees, put in a lot of ditches for roads and agriculture, the water gets into the stream faster and causes more erosion.”

Sedimentation is not all bad. Over the centuries, it helped to create wetlands such as the Kakagon Sloughs.

“You are not going to stop it all, and we don’t want to stop it all. It creates duck habitat and serves as a nursery area for a lot of fish we catch in the bay,” he said.

But the amount of dirt and mud being carried away by the stream today is about double its level before the logging era, Hudson said, and that turns Chequamegon Bay into chocolate milk during storms.

Correcting decades of damage will be a real challenge.

The first of the project’s two prongs is to go into the headwaters of North Fish Creek and essentially create wetlands in former agricultural areas that are not being used for farming.

That portion of the project was undertaken by the Bayfield County Land and Water Conservation Department in cooperation with landowners. The project also has the involvement of the U.S. Geological Survey, the Wisconsin Department of Natural Resources and the University of Wisconsin, Madison.

The next step will use large trees and logs to engineer a logjam at the toe of a crumbling, 80-foot-tall bluff to limit erosion and create valuable fish habitat. That part of the project is set to start this year.

“It will begin as soon as we can get the contractors out there,” Hudson said.

The U.S. Forest Service provided some of the logs and others were provided serendipitously by last month’s flood, which uprooted hundreds of trees.

Ultimately, Hudson said would like to see the work continue beyond the pilot project.

“If it’s actually going to make an impact, if our goal is to reduce the current rate of sedimentation by about half, to somewhere where it would have been by before the logging era … we need to do a lot more of that,” he said.

This article first appeared in the Ashland Daily Press.