Northland College announced today for Earth Day their choices for the best in nature writing this past year. Three authors have been selected to receive the Sigurd F. Olson Nature Writing Award (SONWA) for adult, young adult, and children’s literature.

Established in 1991, the SONWA honors the literary legacy of Sigurd F. Olson by recognizing and encouraging contemporary writers who seek to carry on his tradition of nature writing. Organizers expanded the award to include children’s literature in 2004. This year marks the first to honor young adult.

The winners include: adult author Gary Ferguson, pictured above, for The Carry Home: Lessons from the American Wilderness, young adult author Paul Fleischman for Eyes Wide Open: Going Behind the Environmental Headlines, and children’s writer Alan Rabinowitz for A Boy and a Jaguar. All three books were published in 2014. 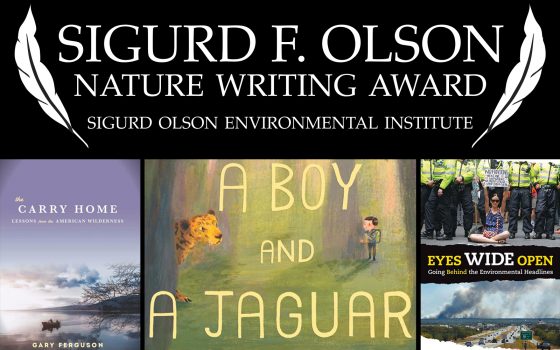 Committee members selected The Carry Home for this award because it is an evocative reflection on Ferguson’s journey to fulfill his wife’s dying wish to scatter her ashes in the five remote locations they loved and shared together.

The memoir chronicles the uplifting power of nature and challenges readers to consider how to foster empowered relationships with wild places.

The Carry Home embodies Olson’s literary legacy through its articulation of the Wilderness Movement, exploring the fundamental meaning of wilderness and by being a “well-written story stylistically,” said Alan Brew, associate professor of English at Northland College, who served on the selection committee.

“We definitely feel like this book captures the human relationship with the natural world,” Brew said. “This is going to be a book that lasts — that is universal — much like Olson’s work.”

In Eyes Wide Open, Fleischman offers teens an environmental wake-up call and a tool kit for decoding the stream of conflicting information confronting them.

Fleishman said this award is an indicator that he is addressing modern concerns in a useful way.   “Doubt is the dragon that authors battle every day,” Fleishman said. “After nearly four years spent on Eyes Wide Open, it’s deeply satisfying to hear back from the world outside my room that the book accomplished its goal.”

In this tale, he describes how his connection to these voiceless creatures was the driving force behind finding his own voice, becoming a zoologist and persuading the Belize government to establish the Cockscomb Basin Wildlife Sanctuary and Jaguar Preserve.

“Rabinowitz’s work carries Olson’s legacy through giving a voice to the wildness within and outside of each of us,” said SONWA selection committee member Eileen Van Pernis.

“Authors are no different than the rest of us who appreciate being recognized for outstanding work” Peterson said. “Our hope is that the award will inspire people to read the selected books for enjoyment and to gain a new perspective on our connections to nature.”