Give a teen a camera, lead her or him into nature, and you could change a life—and maybe help save the planet at the same time.

Northwest Passage is a northern Wisconsin residential mental health treatment program for youth ages twelve-to-seventeen. The organization offers a diverse set of programs and comprehensive treatment led by a full team of professionals from direct care counselors to pediatric neuropsychologists.

Two of these therapeutic programs—In a New Light and Under the Surface—have had great success combining photography, nature, and the principles of positive psychology.

One could follow the career path of Karl back to the fall of 1999, when he sat with classmates Jenny Ulbricht ’01 and Jesse Beightol ’99, atop Palisade Head on the north shore looking out at Lake Superior. One of them wondered aloud about what Lake Superior looked like on the other side.

The next spring, the three shoved off in kayaks from the shores of Ashland, paddled to Waverly Beach, and continued on to paddle the entire shoreline for the next two months. “It was an adventure, like none other,” Karl laughed.

They had days of seven-foot following seas, harrowing waves at Pictured Rocks, and a forty-eight-mile day on Pukaskwa shoreline looking for viable campsites.

“The trip cemented my passion for, and bond with Lake Superior and fresh water,” Karl said. “It will always be my home.”

Soon after, he was offered a job guiding on the Sognefjord in Norway for fellow alumnus, David Parmentier ’90. For the next nine years, he split his time between western Norway and the Apostle Islands, guiding kayaking, mountain trips, and whitewater rafting, teaching environmental education, and spending the winters as a carpenter, ski instructor, and ski patroller.

In 2010, he started his job at Northwest Passage. 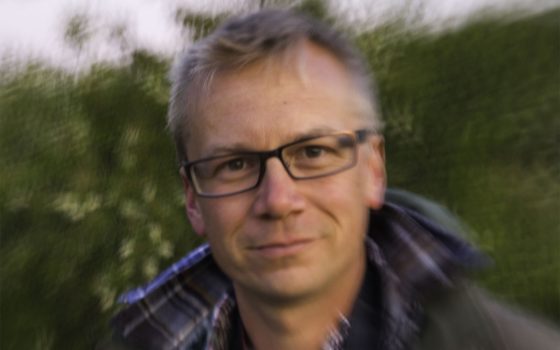 In a New Light

Northwest Passage Program Development Coordinator Ben Thwaits started In a New Light as a classroom project. He put cameras in the hands of the kids as a means of therapy, then led them out into dramatic natural landscapes to capture powerful images. Mostly, he wanted to share his passion for photography with his young clients.

Karl worked with Thwaits to expand the program to Northwest Passage’s girls’ program and eventually to all of their residential treatment programs and group homes.

Northwest Passage’s mission—rooted in the concept that time spent in nature is inherently therapeutic—resonated with Karl’s personal philosophy.

“My years of guiding and instructing for the public had taught me many things,” Karl said, “but chief among them was the realization that transformative wilderness experiences are something that should be accessible to everyone—not just those with the personal skills or resources to do so.”

Millions of people have seen the kids’ photographs on display in galleries, stadiums, national parks, and state capitols. The program evolved with a strong connection to, and support from, the National Park Service, and the team began using the St. Croix National Scenic Riverway as their studio.

Dr. Toben Lafrancois, adjunct assistant professor of natural resources and philosophy at Northland College, reached out to Thwaits after seeing the photographs. “I want to sink your program, let’s take it underwater,” he told Thwaits.

So they did—as Under the Surface. The National Park Service provided seed money for a pilot study and the program is now funded by a series of grants through Northwest Passage, and by a Wisconsin Sea Grant through Northland College.

Under the Surface fits well with Northland College’s mission, according to Lafrancois. “This program is the apogee of connecting physical health, mental health, arts, and sciences with wild experiences in nature.”

Under the Surface began just as they did with the original program, in the St. Croix National Scenic Riverway, but this time they trained the kids to snorkel and take photos underwater.

“We have since produced arguably the most definitive collection of underwater photographs of the St. Croix and Namekagon rivers, as well as explored the lakes of northwestern Wisconsin and the Apostle Islands,” Lafrancois said.

Running the core aspects of the program can be tricky: there’s water safety, camera operation, and the artistic elements of nature photography.

“Ian is so adept at coaxing the kids into being open-minded explorers, overcoming their anxieties, and opening their minds to scientific and artistic curiosity,” Lafrancois said.

Gently awakening young minds is a core part of the program. “When a kid or adult has a life changing moment in nature, they develop a bond and a desire to protect that place and other places like it. Stewardship and environmentalism begin with a love of the land and water,” Karl said.

Connecting kids to water achieves even larger goals. “When kids see themselves as a part of the ecosystem, they realize they are an integral part of something bigger than themselves,” Karl said. “That fosters stewardship—stewardship of the water and of their own spirits.”

Felicia Scheiderhan is a writer living in Duluth.

More About This Project

Artistic work produced by the Northwest Passage clients is showcased at the In a New Light Gallery, located in Webster, Wisconsin. According to Ian Karl ’04, the gallery serves many purposes.

“It’s a venue for kids to have public art receptions and experience the transformative powers of public praise and celebration of their works,” he said.

The gallery also “helps break down stereotypes of kids with mental health issues by showing the public what they are capable of.”

Ian describes standing room only receptions in the gallery. “When a group of kids see sixty people packed into a room to see their photographs, they take with them a confidence that can help them persevere through the hard times.”

Under the Surface at Bayfield High School

A group of students from Bayfield High School will get a chance to participate in Under the Surface this summer and fall in a student-driven exploration, in which program staff provide the tools and support, including water safety, photography lessons, trip logistics, and artistic work with the final products.

“The places we explore, photographs produced, the subjects, and the interpretation will be student-driven,” says Dr. Toben Lafrancois, co-director for the program. The stories and photographs will later be shared at several local and state-wide venues, including a national conference on water conservation.

The program extension is funded by the Wisconsin Sea Grant to involve more communities that don’t always have the chance to express their relationship to the Great Lakes. In 2017, the program will be repeated with kids from the Lac Courte Oreilles Band of Lake Superior Ojibwe near Hayward.