Senior Maddie Wieland did not intend to play soccer when she came to Northland College. She had played her first two years at Buffalo Grove High School in a suburb north of Chicago but thought she had left soccer behind. But then she checked a box on one of her admission forms—something about hobbies—and a coach came calling.

Four years later, Wieland helped lead her team into the soccer history books at Northland College. For the first time ever, the LumberJills  won the Upper Midwest Athletic conference title, then went on to win the semi-final playoffs. The team lost in the championship round but even so, this was one for the record books.

Northland College headlined the UMAC all-conference awards in November with with Wieland and five teammates as first team honorees—sophomore Gretchen Hamernick-Winter, junior Laura Rethman, junior Emily Romuald, sophomore Kaiya Goldberg, and freshmen Harley Kinney. Wieland was also named the UMAC Offensive Player of the Year, while Harley Kinney captured the Rookie of the Year. Justin Sexton was voted by his peers as the UMAC Coach of the Year after helping the LumberJills post a remarkable 7-0-1 conference record to win the title. 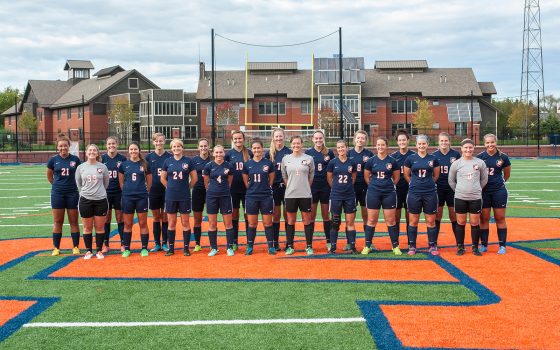 Wieland, a humanities major, has been captain for the last three years and the undisputed heart and soul of this team. “Maddie is an unbelievable captain and her love for the game has definitely inspired our team to push us to where we’ve gotten, said junior Laura Rethmann, co-captain for the last year. 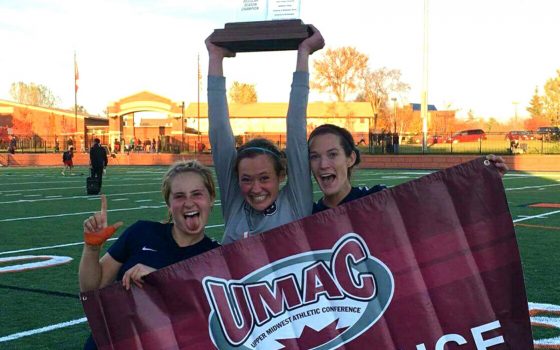 In a game against Bethany-Lutheran, Wieland, pictured right, kicked in the critical winning goal in overtime to take the UMAC for the first time in women’s soccer history at the College. “I know it’s a small thing but it really felt like we had won the World Cup.”

A week later, Wieland did it again—spreading her “Maddie Magic,” as it has come to be known— kicking in the winning goal in double overtime against St. Scholastica, a team Northland hasn’t beaten for at least four years.

Teammate Olivia Kovacs tells a story about Wieland from last spring at a practice in the gymnasium. “We were talking while looking at the conference banners hung on the wall, and there was no banner for women’s soccer, so she tells me, ‘Next season, we’ll have one too,’” Kovacs said. “Maddie gave the team no other option but to make Northland history this season.” 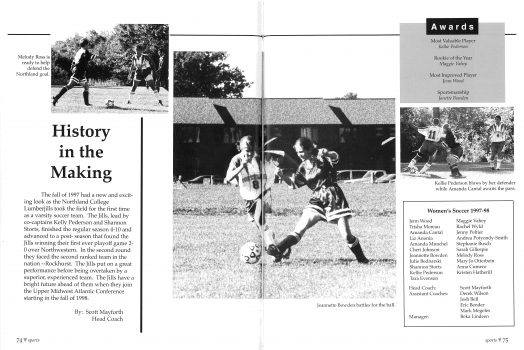 Northland College added women’s soccer to its roster in 1997. They’ve done well in the last nineteen years, but had never taken the conference title. Wieland is not surprised by the team’s success. “For us, it wasn’t a surprise,” she said. “Maybe to everyone else,” she laughed.

She attributes the team’s victories on the maturity of the players, and the hard work. The team has stepped it up on skills work and conditioning—with more work outside of practice. And then there’s the coaching style of Sexton, a 2001 Northland College graduate, who returned in the summer of 2015 to move women’s soccer forward.

“This year the team fully bought into Justin’s program—that means throwing yourself in and trusting what he’s saying even though you don’t understand it at first,” Wieland said.

The team started the year with goal of conference champs—and they came within one game of reaching their goal. “I’m so proud of this team for being so dedicated, for pushing one another and proving to ourselves that we have skill and heart, and that we gave it everything we have,” Rethman said.