Northland College has a big problem: not enough leftovers.

Students at the school have been combining food waste and organic materials like leaves, wood chips, lawn trimmings and cardboard since 1993 and converting what could have become a stinking mess into rich, black, earthy compost.

A state-of-the-art composting machine, installed in 2017 at the rear of the Hulings Rice Food Center on campus has greatly expanded the college’s ability to deal with food waste. The industrial-strength composter can take 70,000 pounds of food scraps and 26,000 pounds of leaves and wood chips and convert them into 32,000 pounds of ready-to-use compost, often referred to by gardeners as “black gold” because of it’s many advantages in gardening.

But an unexpected problem arose when the composter was installed: it is just too effective, having a capacity for far more food scraps than even the most finicky student-diners at the college can produce.

The answer, Northland Food Systems Manager Todd Rothe said, is to open the composting program to the entire Ashland community. 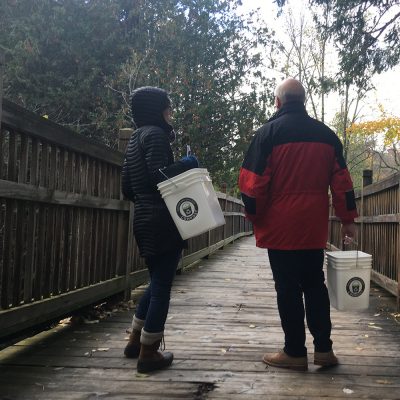 “The new machine that we installed here two years ago is big enough for us to put in one ton of material a day,” he said. “It has an incredible volume, and that allows us to capture waste streams outside of the campus,’ he said. “We might as well fill it up.”

To that end, the Hulings Rice Food Center has signed on a number of commercial clients, including Bodin Fisheries, the Chequamegon Food Cooperative, Good Shepherd Lutheran Church, the Black Cat Coffeehouse and Superior ‘Shrooms to add their compostables to the ever-hungry maw of the composter.

Yet there is still room for more, so the operation has also made it easy for bay-area residents to contribute their own compost, almost for free.

“Almost” because the program requires the acquisition of a special covered compost bucket, for which there is a $25 security deposit. After that, it’s just a matter of bringing the bucket to the Hulings Rice Food Center, dropping it off, and picking up another (pre-cleaned) bucket. Leftovers can be dropped off Wednesdays from 9 a.m. to 5 p.m., Saturdays from 9 a.m. to 12 p.m. or by appointment.

The program means that people can keep their compostable materials out of the landfill, and Northland can produce compost and turn a little profit in the bargain.

“The compost sells for 50 cents a pound, and people who take part in the compost program get a 25 percent discount,” Rothe said.

“The idea is that we want to eliminate compostables in the waste stream, and turn it into this beautiful life-giving substance that can really boost people’s gardens,” Rothe said.

That’s a great idea, as far as bucket composter Jason Holmes of Ashland is concerned.

“I’ve got a small yard, I really don’t have a place to compost. It’s just a short drive over here and bringing a bucket and dropping it off and grabbing a new one is easy,” he said as he dropped off a bucket of kitchen scraps.

The key for Holmes is that he can compost his food scraps with virtually no effort.

“It goes from the kitchen straight into the bucket. It’s easier than dealing with it at home,” he said.