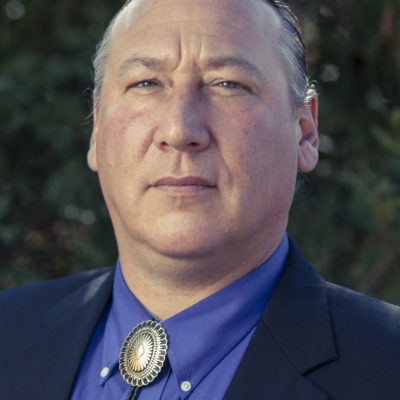 Michael “Mic” Isham Jr. ’87 arrived at Northland College as a self-described punk kid who wanted to play basketball. During his time, he connected with the professors turned mentors—most notably, Native American Studies Professor Joe Rose ‘58—played intramurals, studied sociopolitical and environmental studies, and served as president of the Native American Student Association for two years. “It was a small school. You couldn’t hide anywhere and the professors were there with us,” he said. “I needed that.”

He also worked in two different internships with the Great Lakes Indian Fish and Wildlife Commission (GLIFWC), an agency representing Wisconsin’s eleven tribes and the protection of their sovereignty rights.

During the twenty-years in between, he has taken leadership roles in politics, nonprofit work, and civic life, always pushing for the big picture.

The Lac Courte Oreilles (LCO) voters elected him to tribal council for the last twenty years—including, most recently, two terms as tribal chairman. The Obama administration named him to the Great Lakes Advisory Board, where he advocated for protection vs. restoration in regards to the Great Lakes Restoration Initiative. He served for more than a dozen years on the GLIFWC Board of Commissioners and on the Voigt Intertribal Task Force.

He coaches basketball, football, and baseball and founded the LCO Boys and Girls Club in 1995—something he considers one of his shining achievements. He’s watched those kids turn into police officers and professionals and continues to witness programming that helps lower truancy and improve homework.

“Mic has long been a committed and passionate advocate,” said Peter Annin, co-director of the Northland College Mary Griggs Burke Center for Freshwater Innovation. “Whether it is at the State of the Tribes address in Madison, or Northland’s Water Summit on Madeline Island, he speaks with compassion and confidence on behalf of the entire LCO community, regional tribes, and especially the regional environment.”