In ninth grade, we were assigned a career research project. I picked wildlife biologist.

When Northland College sent a brochure with students paddling a wild river, I was hooked. At Northland, I found great friends and mentors. Dr. Lee Stadnyk guided my path through environmental studies. Spring courses paddled the Boundary Waters.

A friend encouraged me to take Drawing 101. That class changed my life. Paul Hubinsky, head of the art department, became a mentor and friend. I took an art minor, an untraditional but profoundly fulfilling choice.

After graduation, I worked for several federal agencies, finished grad school, and returned to work at the Sigurd Olson Environmental Institute. Then I met my now husband, Jeff Wilson ’76, a biologist with a crazy adventurous streak. We took off for one year, traveled, volunteered for research projects, explored, and met amazing people.

Returning, we moved to a remote cabin and I became immersed in bringing art and science together. 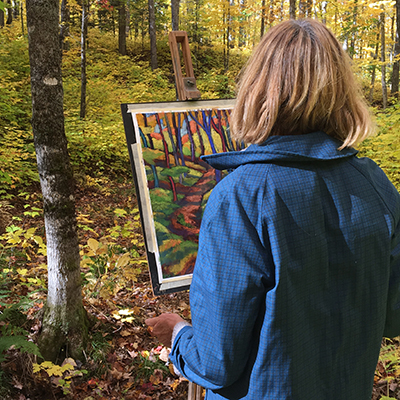 In 2006, I had an opportunity to test the communication power of art. With twenty-six artists and scientists, we created Paradise Lost? Climate Change in the Northwoods an exhibit seen by over 100,000 people. The success inspired longer-term collaborations with the University of Wisconsin called Drawing Water, which explore lake science through art.

In 2011, even more controversial, a massive open-pit mine was proposed near Lake Superior.  Twenty-one artists worked with historians and scientists to create Penokee: Explore the Iron Hills to encourage citizens to envision a sustainable future for the region.

Most recently, I have leaped into a new project called Wisconsin’s Green Fire, a coalition of natural resources professionals working to elevate science in decision making in Wisconsin.

Arts and sciences have always evolved together. Writing, arts, and music can move people to consider science and our role in the world in new lights. I feel lucky that I attended a liberal arts environmental college. It inspired my career, and mostly gave me joy in life that comes from creative processes.