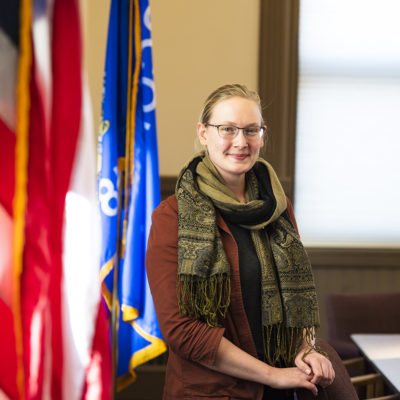 In November 2019, Sarah Szymaniak ’17 began her new job as the City of Ashland deputy clerk. Responsible for executing elections, she had read reams of election law guidelines, made it through her first election in February 2020—and then in mid-March, the city locked down.

“Elections can’t just stop,” she said. “There’s no way to pause or delay—it wasn’t going to stop so we had figure out how to conduct an election during a pandemic.”

She says she reached for her outdoor education degree for logistics, leadership, and safety protocols. She worked night and day to learn about COVID-19, how to keep volunteers and voters safe, and in time for the April spring election. “I went into risk management mode,” she said.

Hand sanitizer had vanished, masks non-existent, and so she went looking and with the help of the Ashland Police Department was able to order masks from Stormy Kromer in Ironwood, Michigan. She had to redesign her office, the polling places, and work procedures.

“I have this distinct memory of sanitizing and wiping down every surface, and stuffing masks for poll workers into baggies,” she said. “And remember that in April, not everyone wore masks—compare that to the fall elections where the world has adapted to a pandemic.”

She lost all but five of her ninety poll workers due to COVID-19 concerns. So, she started with the remaining five and built up a new squad of fifty—running elections with nearly half the usual polling staff. She also had to shift the entire election system to accommodate new ways of voting—like from vehicles. In the April election, she received ten times more absentee requests than the year before.

“We have one business day to process a request once we get it, so we had to invent new ways of handling the load while following Wisconsin election law,” she said. And then came the November presidential election with the potential violence and unrest, heightened election security, and false reports of voter fraud. “All year long, I checked in with the State when I was uncertain so I didn’t make mistakes,” she said. “We implemented additional security measures including cameras and dropbox security seals. We followed voter registration and absentee ballot laws to the tee.”

While the election went way smoother than Sarah had anticipated, she received hurtful comments like “you’re going to change my vote anyway” and “where are you going to dump my ballot.”

“It was really hard to listen to the anti-clerk, anti-election, anti-poll worker rhetoric,” she said.

This is why she believes voter education and communication will be vital to ensure fair, open, and transparent elections. “Election law is inherently confusing, but I think it’s up to clerk professionals to help translate and explain those laws to their community members,” she said.

After the November election, Sarah said she was asked to do a machine audit but not a recount. “The city clerk and I literally sat for ten-to-twelve hours to make sure the machine counted it right,” she said. “And we were right.”

One year and six elections later, Sarah says the process is like day and night. “It’s almost an expedition mindset. I had to make every day as effective as possible—and know I needed to grind through, move forward, and make progress,” she said. “A year into this expedition feels like Day Thirty,” she said and started to list off the joys of Day Thirty—solid systems, etc.— and then reconsiders, laughs, and knocks on wood.