Four of Northland College’s graduating chemistry majors are pranksters, but their collective research on plastics is anything but a joke.

Dylan Hudson, Leah Jaynes, Louis Corcoran, and Tyler Klein have all spent a number of years working together on one of the chemistry department’s ongoing projects, which aims to lessen the impact of plastic products throughout their lifecycle.

“They’re working on things like trying to make plastics from renewable sources, and trying to take commodity type plastics—such as soda bottles—and making more use of them,” explained Nick Robertson, associate professor of chemistry.

“The ultimate goal is to inch the field of sustainable plastics forward, we’ve managed to do way more than I thought was ever possible when I first started and a big part of that is having such effective students, that get a lot done in a very short period of time,” he said.

As freshmen, these students stepped into the chemistry lab bewildered. Four years later, they have all accepted offers to pursue graduate studies in chemistry.

Corcoran will attend the University of Minnesota Twin Cities.

And Hudson is headed to Colorado State University.

“I’m losing a lot of good students; If I could delay their graduation, I would,” Robertson joked. 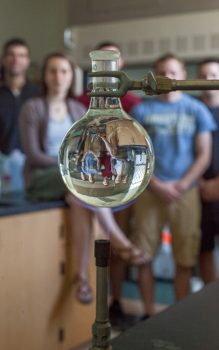 “These four have worked really well together, they are a great research team,” Robertson said. “They’re a lot of fun, incredibly sharp, but humble and personable. It was always a huge privilege and pleasure to be able to spend time with them.”

In 2015, Corcoran, Hudson and Klein placed third at the Wisconsin Science and Technology Symposium in Eau Claire, Wisconsin. What became clear, is that the research happening at Northland College is on par with work occurring at larger universities.

“And it is research that has huge importance,” Corcoran explained.

Corcoran admits to being biased, but believes Northland College’s integrated focus on sustainability drives students to make a difference in their field.

“We developed a new method of transforming waste plastics, like polyethylene terephthalate—a plastic widely used for water bottles—into commodity chemicals that are used in a variety of applications like pharmaceuticals,” Klein explained.

Having published work in a high-level, peer-reviewed journal is incredibly impactful for students, according to Robertson, and helps to set their graduate school applications apart.

“It’s one thing to say we’re working on these types of plastics and another to show that we’re taking it from concept to publication stage,” Robertson said.

Last summer, Jaynes completed a Research Experience for Undergrads (REU) at Cornell University, where she worked on developing a new catalyst.

“Now we’re exploring that catalyst with some of the reactions we’re working on with some of Northland’s reactions,” Robertson said.

She will continue working with polymers and hopes to further foster a collaboration between Cornell and Northland.

All four graduating chemistry majors are proud of the work they’ve completed at Northland. However, each agree that their most triumphant moment was when they succeeded in a wicked prank.

“This was a prank that all of us played on Nick one time while setting up our hydrogen reactors. We had been planning to do something of this nature for a while,” Hudson explained.

Students are required to notify Robertson when they start the reactors because hydrogen is incredibly explosive. Well schooled in safety and lab protocols, the students made sure their work was completed and cleaned up—to keep the prank safe.

The students told Robertson they were going to start the reactor. As they started the machine, they simultaneously filled a balloon with air and popped it.

“He made it down the hall in half a second,” Corcoran laughed. “I don’t know how he didn’t have a heart attack!”

“We definitely managed to take a few years off of Nick’s life as he came rushing into the lab from his office, relieved to see nobody was actually hurt,” Hudson added.

Working in a group has allowed Corcoran, Hudson, Jaynes, and Klein to progress in their research more quickly, and feel comfortable asking for help.

These are skills Robertson believes will be vital to their future success. “We’re past the pride part. There’s always going to be someone who knows more than I do, and working with a group now has taught me to break through that barrier,” Corcoran said.

“It has made things so much less stressful,” Jaynes confirmed.

“Being a part of a research group is an experience I wouldn’t trade for anything. I couldn’t have asked for a group of more personable people to get to work with,” Hudson said.

With Corcoran, Hudson, Jaynes, and Klein away at graduate school, the research at Northland College will continue. Because of their efforts, Robertson has high hopes of a breakthrough in the near future.

“The research is ongoing and these kinds of projects take years to progress. Typically they inch along and then accelerate quickly,” he said. “We’re getting much closer to breaking through a wall we have been struggling with.”

Amber Mullen ’12, a graduate of Northland College and a freelance journalist, is the author of this article.