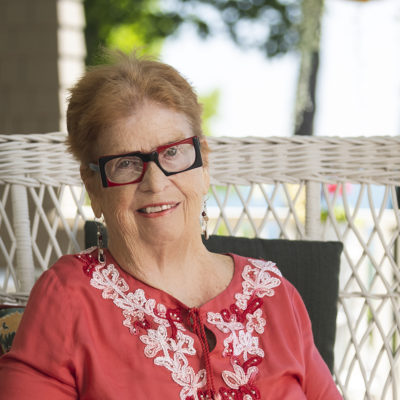 “Your generosity and commitment to Northland College continues to take my breath away. You have always made a full commitment to all of the four W’s: wisdom, work, wallop, and wealth.” —In a letter from Don Chase to Mary Rice in 2002.

Northland President Karl I. Solibakke and Major Gift Officer Mary O’Brien called on Mary Hulings Rice at her home in Bayfield this past summer to chat about the College and talk about her legacy. Mary recently turned eighty and she retired from the board of trustees in 2019, after serving for thirty-five years.

As the two were standing to leave, Rice told them, “Take care of my college—and don’t forget about me. I won’t forget you.”

As if the College could forget such a formidable, charismatic force.

A graduate of Carleton College in 1962, Rice spent her early adult life running a cooking school and cooking equipment store with her sister, Martha Kaemmer. She volunteered at the St. Paul Chamber Orchestra and started Grand Old Day—a festival with a parade, food, and events along three miles of St. Paul’s Grand Avenue.

A member of the Andersen Windows family, she knew the Lake Superior region from her time spent at Sand Island, where the family has one of the last private inholdings in the Apostle Islands. And she knew a bit about Northland through her mother, Betty Hulings, who served on the board of the Sigurd Olson Environmental Institute and later received an honorary degree from the College.

She moved to Bayfield in 1980 to kickback. Instead, within weeks, she transformed an old bar into Maggie’s, and then added Mainstreet Maggies, the Egg Toss, The Clubhouse on Madeline Island, and the Wild Rice Restaurant that together created the restaurant scene and made the region a food destination.

Through her family foundation and her own personal giving, Rice is one of the largest donors to Northland College.

“Mary not only gives generously, she gifts every organization she touches with her energy, style, and deep love for this region,” said O’Brien, whose first summer job was washing dishes at The Clubhouse; she now serves as chair of the Apostle Islands Community Fund.

Don Chase, who has worked with Mary since the start, agrees. “When she joined the board of trustees in 1984, she changed the culture,” said Chase, who was vice president of advancement at the time.

She turned a working board into a giving board by challenging others to match her giving, by opening the doors to her home and restaurant for staff and faculty parties and donor dinners, and by funding things small and large—everything from St. Paul Chamber Orchestra concerts on campus to student ski trips to repairs on the president’s house to the creation of the Hulings Rice Food Center.

She organized “mystery bus tours,” taking trustees on rides through neighborhoods in Duluth and the Twin Cities. “We went to places we knew about but had not been,” Rice said during an interview on her porch, overlooking Lake Superior. “It was a chance for us to talk.”

Rice says her memory is not what it used to be but she easily recalled the mystery tour that ended on the roof of Prince’s Minneapolis night club, Glam Slam, with a scrumptious meal.

“It built trust among the board,” Chase said. “That was her way to solidify the support and the commitment of the board.”

For May term In 2003, Mary invited David Saetre,—emeritus professor of religion and philosophy and a good friend—and students to her remote Italian villa, a fourteenth-century Franciscan monastery. The idea was to create a living and learning location to expose students to art and Italian village life. These trips occurred for several years.

“Her gifts and philanthropy benefit the whole of the College,” Saetre said. “The motivation has always been to provide a place in the north to educate students on the environment and the history of the region.” In Italy, Rice would engage students around the breakfast table out on the veranda. “She wanted to know what they were learning and what they were experiencing,” Saetre said.

She incorporated art, food, and people from the village, invited painters, mechanics, and even magicians to come to speak to students. “One year an oil painter who did large, surrealist streetscapes showed his art—interesting local folks,” Saetre said.

It was in Italy that the seed of an idea for the Food Center started. Exploring her interest in regional foods, she started conversations with Italian professors and growers about varieties and cultivation of heritage produce. She brought that idea back to Northland and propagated it via the Food Center.

This is Saetre’s telling. When asked about this origin story, Mary shrugs, then with a laugh, says, “let’s go with it.”

In a satisfying twist, two of Rice’s most recent projects, the Food Center and CORE Resources, have been working closely since the start of COVID-19, to create a food bank for the region.

Forty years since her arrival in Bayfield, Rice has officially slowed down but she is far from done with Northland College. When asked what her goal for Northland would be, she quipped: “solvency.”

Then she continued, “I want it to be a place where people seek to learn more about the environment and how we’re going to live in that environment.”