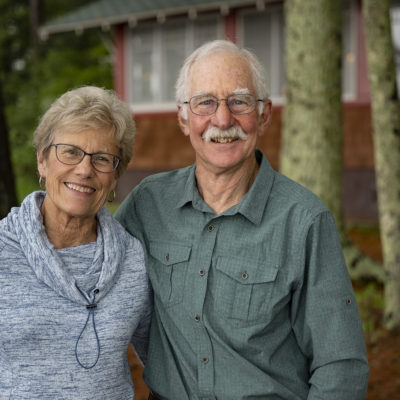 In 1932, Milton Sprague had only two ways to get from his home in Washburn, Wisconsin, to Northland College. Milton either hopped aboard a train or took a narrow dirt road thirteen miles to Ashland.

The Spragues were a timber family. It was three years into the Great Depression, and Milton was the youngest of three. He followed his two older siblings to Northland College, which was established in 1892 to serve the children of miners, immigrants, lumbermen, and the neighboring Ojibwe communities.

“Families did not have the resources to send their kids to urban areas for college,” said Milton’s son, Monroe, in an interview on the back porch of his dad’s home, located on Lake Superior in Washburn.

At that time, more than half of the College’s students were from Ashland and the surrounding area. Milton lived in the basement of President Joseph Daniel Brownell’s house and worked in the College print shop.

He studied chemistry and biology, took religion courses, and was a member of the “Hungry Seven,” along with Alva, Ann, and Arthur Minar, who sat together for meals. His brother Vance had graduated the year before and moved to Madison to earn a graduate degree in agronomy; his sister Prudence was in her final year at Northland.

“Dad earned a liberal arts degree, yet he was a scientist,” Monroe said. “He felt the liberal arts were important parts of a good education.”

After Northland, Milton—like his brother Vance—attended the University of Wisconsin-Madison, earning a degree in agronomy. That’s where he met Margarete, a graduate of the Oklahoma College for Women, who was obtaining her master’s degree and teaching certificate in German.

They married during WWII and after discharge moved east when Milton took a job as a professor of agricultural sciences at Rutgers University.

“Dad experimented in no-till farming as a way to reduce the number of passes over his field a farmer needed to make with his tractor to produce his crop, “Monroe said. “Before that he had experimented with red clover, and then transitioning to experimenting with ways to store better silage using plastic for silos.”

For his work, he gained international recognition for his expertise in no-till farming and agronomy—and his work from that era can be seen in current farming practices.

Monroe became acquainted with Northland College when his dad would bring him home to Washburn during summer vacations. “He was fond of Northland and gave to it steadily,” Monroe said.

Monroe and his siblings established a scholarship in the 1990s in the name of Milton and Margarete—because both believed that a liberal arts education was the start of a wondrous journey into knowledge and self-discovery.

Monroe did not follow in his dad’s agronomical footsteps, but he did study biology and chemistry to become an ear, nose, and throat doctor. He and his wife Carol, live in Chico, California, but use the house in Washburn during the summer with his brother and sisters, entertaining kids and grandkids, nieces and nephews, and friends.

Now retired, he and Carol continue to support the family’s scholarship endowment, ensuring its viability into the future. In particular, the Sprague’s continue to give because of their commitment and desire to support rural students and to further the College’s mission of training and educating stewards of the land.

“We want to invest in future generations,” Monroe said, looking out at Lake Superior. “It’s the best way to help people appreciate the world and take care of it.”