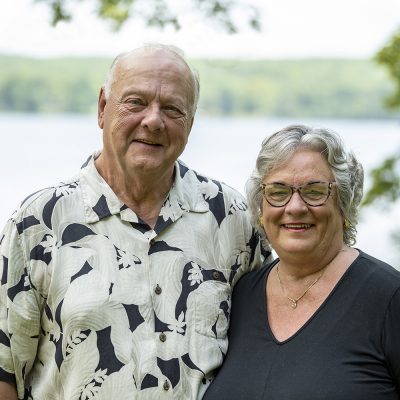 In 1991, Bruce Goetz, a professor of geology, and his wife, Ruth, gave the first $1,000 gift to the Tim Carpenter Memorial Scholarship Endowment. Tim had been a student of Bruce’s in the 1970s—and Bruce wanted to do something to honor the young man he called friend.

“I have seen people do some very nice things for Northland and Northland people over the years,” Don Chase, assistant vice president of development wrote to the Goetzes. “Yours ranks right at the top.”

That’s how Bruce and Ruth roll.

Bruce came to Northland in 1969 to teach geology because he believed in the Northland mission—that students come first. “Fifty-two years later, I firmly believe that has not changed,” he said, sitting on his deck, a view to Garden Lake.

Bruce’s legacy is lasting. He was integral to the creation of several programs: environmental studies, Geographic Information Systems (GIS), outdoor education, and meteorology. He taught one of the first computer classes and carved the College’s mace used at formal ceremonies. “The beauty of a small college—adaptability,” Ruth commented.

Bruce traveled the country with students from the Tetons in Wyoming to the lava flows in Hawaii and down the Grand Canyon. In his forty-seven years at the College, his door was always open. “I was able to help students learn about the things I love,” he told a reporter in 2017 when he was awarded professor emeritus. “Right up to the end I was happy to see students learning and being enthused.”

Bruce and Ruth have retired to Garden Lake in Cable, where Bruce still bikes 20–40 miles a day—sometimes with his former colleague Tom Fitz, professor of geology—and socializes with former students. He also teaches the neighbors about the rocks in their yards.

Bruce and Ruth started giving to the College his teaching years and continue to give now. “I’m grateful I’m in a position where I can still help,” he said. “I spent my career at one place, and I want it to succeed.”