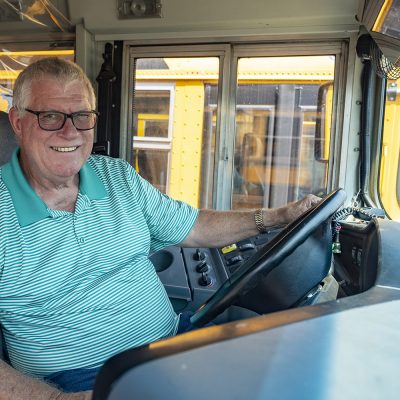 Fun fact about Jim Quinn ’73. He graduated from Cumberland High School where Henry Fitzgibbon ’51 taught. Fitzgibbon, who lives in Florida, is one of Northland’s oldest living alums. It was Henry who encouraged Jim to attend Northland College.

“I was fortunate that we crossed paths because attending Northland was one of the best decisions I ever made,” Jim said. “Henry was a fantastic teacher and always worked to have his students become the best they could be.” The two men still exchange emails a few times a year.

Quinn studied music and education at Northland and continued his education, earning a master’s in teaching vocal music. He taught music and chorus and eventually became a principal, earning another master’s as an education specialist. He also coached basketball, football, and was an athletic director and director of transportation.

He married his wife Barb in 1979, and they had three children—Amber, a nurse and the manager of an ICU, and twin sons—Aaron, a builder, and Adam, a director of sales. Barb drove a school bus for twenty-eight years, retiring three years ago.

Jim retired for the first time in 2006—and went back to work as a principal at a private school, a director of finance, district administrator, and bus driver. Now in his seventies, he still teaches music fundamentals at a private school and continues to drive bus full-time. “I really enjoy the bus and the kids,” he said.

His most satisfying moments have happened in the last year, during the pandemic lockdown.

When his school district closed on March 17, 2020, Jim’s first concern was for the kids. “I told the district I would do anything to help keep the kids on track with their instruction,” he said. The district and the bus company devised a plan for meals and homework. “When I was asked to drive the bus for meal delivery and homework delivery and pick-up, my answer was easy,” he said.

For more than a year, he and Manawa Elementary School Health Aide Julie Peterson delivered sixty meals to students on a five-mile route around the City of Manawa, Wisconsin. (The district delivered thousands.) Julie would dress up in costumes each week and tap on windows to wave to the kids.

“The kids who came to the window each day got a great kick out of this,” he said.

Jim also dropped off homework assignments to Amish students who did not have internet access. Jim would then get it to their teachers to check it so he could return it on his next run. “This was a truly positive outcome to a very bad situation,” he said. “I give a lot of credit to the district leadership and our bus company for working so quickly to get a plan in place and then execute.”