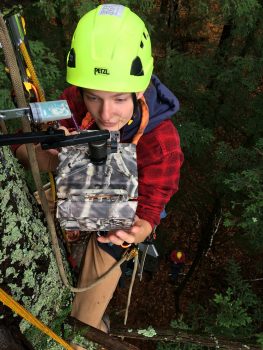 As part of a larger study of old and large white pine canopies, senior Madison Laughlin of Edmonds, Washington, documented the tree frog almost seventy feet above the ground — more than double the highest previously on record. Her findings were published in the May issue of the scientific journal, Ecology.

“This frog appears to be able to weather sun during the day in the canopy by finding shady and cool spots,” said Laughlin, who studies natural resources and geology.

As part of the study, Laughlin and her tree-climbing professors set up three motion sensitive cameras in three white pines to observe life at the tops of the trees. They have already identified 17 species of animals—squirrels, birds, mice, and tree frogs—as well as a mushroom species, a variety of insects and many lichen species particular to this special habitat.

“This is research that is literally being done in our backyard,” said Assistant Professor of Natural Resources Erik Olson. “That is one of the beautiful things about science — we don’t have to go to the ends of the Earth to make new insights into our world.”

In this case, capturing frogs in unexpected places. Tree frogs are small and similar in temperature to their environment so do not set off the motion sensitive cameras. However, flying squirrels do. And on four different occasions, flying squirrels have exposed tree frogs up high.

“It was really exciting to find something that wasn’t a squirrel,” Laughlin said of looking through hundreds of collected camera captures.

Laughlin says that there is a gap in what we know about tree frogs — oddly, there isn’t much research on tree frogs in trees. “Most of the research is about their breeding, which takes place in ponds,” she said. “This research is helping open the door to the vertical dimension of habitat.”

These images suggest a higher level of habitat usage in the tops of trees than previously thought. “I love forestry and forest ecology,” Laughlin said. “And I’ve never thought about the three-dimensional aspect of habitat — there’s a lot going on up there.”

Additional work is underway to describe the habitat usage of other animals high in the trees and to begin to answer the question of why tree frogs go so high.

“We’re not surprised that the canopy is an important habitat, but we are surprised how many and what species are up there and how often they visit,” said Assistant Professor of Forestry Jonathan Martin who is co-directing the research. “The combination of the scale and growth patterns of these trees, as well as the habitat surprises, gives me a renewed appreciation for the complex processes occurring high off ground.”

The canopy survey is a collaboration between Martin and Olson, who both have a passion for climbing.

When Martin returned to the region to teach at Northland, he started to notice a special niche of the super canopy of white pines.

“I was curious about how these large sentinel trees grow, store carbon and respond the environmental variability, but the first step was to figure out how big they are,” he said.

Models used to scale total tree mass and volume aren’t accurate for trees three or four feet in diameter. In addition, the scientific community doesn’t know how tree structure and growth changes when trees get really big and old.

“Most of our models that we use to determine the total amount of biomass or carbon that trees store assumes that growth is distributed evenly across the tree,” he said. “The question is, is a big tree just a bigger version of a smaller tree?”

The John C. Bock Foundation provided funds for a multi-year grant in 2015 to help answer these questions. Martin brought in Olson, who has experience using remote cameras in trees.

Preliminary results indicate the answers are not simple, that a good year for tree growth may be a good year across the whole tree but the upper canopy can put on more or less wood, relative to the lower stem, as the canopy changes.

In other words, the changes aren’t necessarily represented in growth in the lower stem which is where trees are typically measured,” Martin said. “These big trees are also very complex surfaces that are ecosystems themselves.”