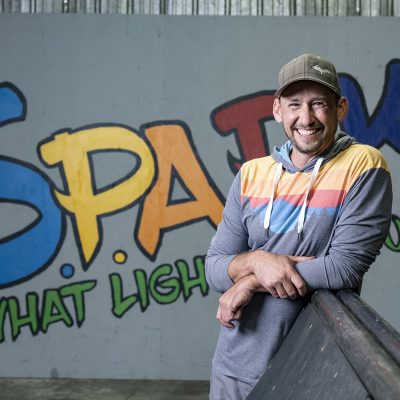 You know that look someone has when they’re in love for the first time? The permanent half-smile like they’re recalling a joke from the night before, the easy laugh, lightness of step? That’s the look Scott Griffiths ’97 has. He glows.

For one, he’s married to Kellie Pederson ’98, a ray of sunshine herself. The two of them have lived a long life together doing what they love—as artists, performers, educators, leaders.

“I feel blessed, I’ve been able to chase passion my whole adult life,” Scott said from a warehouse he transformed into a haven for youth. “Money has never been the driver.”

For the last two and a half years, he’s been leading a state-funded, county-run after-school program, named SPARK (Student Pathways to Adventure Resilience and Knowledge) for twelve-to eighteen-year-olds designed as a substance use prevention program.

Located in a warehouse by the skate park in downtown Ashland, Wisconsin, SPARK has a basketball hoop and volleyball net outside. There are trailers with mountain bikes, fat tire bikes, and paddleboards ready to hit the trail or water. Inside, there is a skateboard and BMX park, pool and foosball tables, a lounge, refrigerator, office space, and a room with musical instruments and chairs arranged as if waiting for the band to arrive.

In other words, anything could happen here.

“I’ve spent my whole life being driven by what lights me up and that’s what we’re trying to do with these kids—we help them discover what lights them up,” Scott said.

Scott graduated from Northland College with a degree in outdoor education. For his first job out of college, he led troubled teens into the wilderness for thirty days at a time. Two years later, a motorcycle accident and a broken neck left him reconsidering whether he wanted to carry a backpack for a living.

While recovering, he earned an alternative education teaching degree and became interested in art.

He worked with alumnus Chris Lutter-Gardella ’93 creating oversized puppets and perfecting street performances with them. A bicycling puppet named Sunny and a parade of large animals caught the eye of Jane Goodall, and next Scott, Kellie, Chris, and others were off to “do a gig with Jane” at the American Museum of Natural History in New York City.

That gig led to years of busking on the streets of cities around the US, then to the world of west African dance—including a trip to Guinea in west Africa. He and Kellie moved to Boulder, Colorado, and ran a democratic school. “It was super aligned with my philosophy on how kids learn,” he said. “Give them agency, resources, and they will learn. It was a great passion project.”

They eventually returned to the Chequamegon Bay region, and, following Kellie’s passion they opened Humble Be yoga studio. Scott was elected to three terms as mayor of Washburn, before leaving to coordinate a mental health grant for the School District of Ashland.

As that grant wound down, Ashland County contacted Scott about managing another grant to reduce teen substance use in the community, and several weeks later, SPARK was born.

“What’s been really fascinating and what I love about this program is that it’s taken everything I’ve ever done in my life, and wraps it all in one package,” he said.

At SPARK, the staff’s primary focus is building solid relationships with the youth they serve. Scott and his staff—consisting of several Northland alumni over the years—take students paddle boarding, rock climbing, kayaking, mountain biking, roller skating, snowboarding, and hiking. They host classes in photography, art, and anything else their kids want to pursue.

“The activities are great but really it’s about the relationships,” he said. “We’re trying to provide opportunities for kids and hope they find something to light that flame.”

Scott’s investment does not stop at the warehouse door. The week before this magazine interview, in early September, he and Kellie deepened their conversations about fostering one of the kids in the program. “This is one of the kids that really hit a soft spot. I’ve been caring and concerned about her since we met at SPARK two years ago,” Scott said.

And now two have become a family of three. What he and Kellie are doing for this teen—providing a safe and welcoming home—is what Scott and the SPARK staff continue to offer to the youth of Ashland. They feed them dinner, provide transportation, and see and treat these kids as the beautiful, unique, talented, and brilliant kids that they are.

“I really, truly can say that I love these kids. My day is better when they show up,” Scott said. “Some of them make me a little crazy sometimes and I still get a smile on my face when I see them walk in that door.”