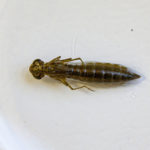 The adult dragonflies that we often see flitting about near any lake or stream, are quite the common sight. But did you know that just below the water’s surface, hunting in the shallows, there are also dragonflies? Well, baby dragonflies.

The larval stage of this insect—which is about the size of your thumb—is a very formidable predator. It is also an essential part of the wetland food web, which is why larval dragonflies make a wonderful test subject for scientists interested in studying mercury content in wetlands.

In a major nationwide federal research effort, the National Park Service is working with partners to collect dragonfly larvae and monitor their mercury content from more than 107 national parks across the continental United States. The National Park Services’ first report on the Dragonfly Mercury Project was published this week in Environmental Science & Technology.

The Mary Griggs Burke Center for Freshwater Innovation at Northland College is one of those partners that collects samples in four different parks in Lake Superior and northwest Wisconsin through the Dragonfly Mercury Project.

Initial results have been positive. Due to the growth of renewable energy in our country and around the world, nearly 20 years of mercury monitoring shows that the levels are slowly declining.

But the importance of continued long-term data collection and monitoring cannot be overstated. The larval dragonflies are the “canaries in the coal mine” and will help show researchers and the public which wetlands contain the greatest concentrations of mercury.

To help gather this data, Burke Center researchers visit several national parks, including the remote Isle Royale on Lake Superior. Though this summer, the sampling at the park is only being done by park service staff because of the limited public access to Isle Royale due to Covid-19 safety concerns.

Isle Royale is the least-visited national park in the continental United States, and even there, the mercury concentrations in the dragonflies are still higher than most other testing sites across the country.

This is concerning. Mercury is a contaminant found almost everywhere. It travels with wind, dust, rain, and snow. Consuming it can cause impairment in nervous system functions as well as threaten the development of children in utero.

In ecosystems, it bioaccumulates, which means once it is consumed by an organism, it doesn’t eventually exit that organism’s system.

For example, algae in the water will absorb mercury from the environment until a tadpole comes along and eats it. Now that tadpole contains the mercury from those algae as well as other things it has been eating.

Then, the dragonfly larvae eat the tadpole, the fish eat the dragonfly, and people eat the fish. At the top of the food chain, we consume all the accumulated mercury from every organism below us.

So how does the mercury get into the environment in the first place? For one, the burning of oil and coal for fuel is a huge part of the problem.

These well-known air pollutants release mercury into the air where it travels around the world with the wind and precipitation, even to the most remote places like Isle Royale.

David VanderMeulen, an aquatic ecologist for the National Park Service, is the Burke Center’s local contact for the project. His experiences with the dragonfly project go back to when his team picked up the project nine years ago where it began in four national parks, eventually growing to more than 107 parks today.

As it turns out, dragonflies make great indicators for mercury concentrations because they are predatory, easy to collect, and absolutely everywhere. “If you have water, you’re probably going to have larval dragonflies,” says VanderMeulen.

So next time you’re out on the water and see adult dragonflies buzzing around, just know those little canaries are also there, just below the surface of the water, helping scientists gather the information to help move toward a safe and informed future.

Bay Paulsen is a junior at Northland College and works at the Mary Griggs Burke Center for Freshwater Innovation.