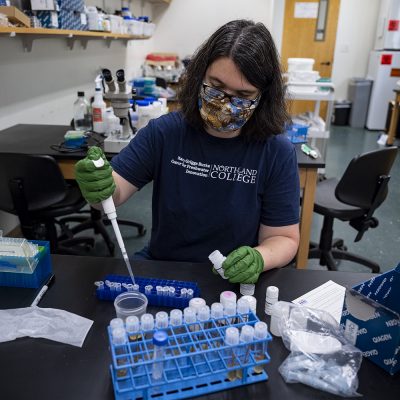 On a sunny, summer Monday afternoon, Dr. Alissa Hulstrand, assistant professor of biology and affiliated faculty of the Burke Center, ate lunch at Maslowski Beach while keeping her eyes on the seagulls nearby.

She was waiting for one of them to defecate so she could swoop in for the poop. One did but she realized she had forgotten her spoon. Hulstrand’s innovative thinking led her to use a piece of driftwood, successfully obtaining the needed sample.

Seagull poop wasn’t the only thing Hulstrand and her research assistant Theo Leifheit had on their minds. They also needed excrement samples from dogs, cows, and humans.

These samples are for a microbial source tracking project that the Mary Griggs Burke Center for Freshwater Innovation began on July 1. Hulstrand is an affiliated faculty member at the Burke Center, a new initiative that recognizes collaborations and partnerships that faculty members on and off-campus have with Burke Center students and staff.

Throughout the summer, the City of Ashland relies on researchers from the Burke Center to test the city beaches for E. coli bacteria twice a week. When E. coli levels are high, the Burke Center will put up beach advisory signs. If it’s high, they’ll close the beaches, such as Kreher Park Beach, where it was closed for the same amount of time as it was open this summer.

The poop samples are from the suspects of this E. coli contamination case, and any one of them—bird, cow, dog, or human—could be the culprit.

For the project, Burke Center researchers are collecting additional water samples from beaches and stormwater outfalls to not only be tested for E. coli but also to determine the source of the DNA inside the E. coli.

This is done through a laboratory process called quantitative polymerase reaction (qPCR). “To understand how qPCR works, it’s better to first understand what DNA is,” Hulstrand said.

Hulstrand also described DNA as an alphabet, having four letters instead of 26.

“You put those four letters in different combinations, stretch out those combinations for long enough chains, and you have words, sentences, and paragraphs that are unique and specific to those bacteria,” Hulstrand said.

The sample is collected and filtered in the lab. It is then isolated using a kit that puts the bacteria through a series of washes and exposures to different buffers that break open the bacteria cells and concentrates and cleans the DNA.

The DNA is then put into the qPCR machine, where the letters and phrases inside the DNA are read and copied repeatedly.

The qPCR process is matching the genetic markers—the collected poop samples— to the samples collected at the beaches and stormwater outfalls. Trying to match DNA to known sources is like trying to match the phrases together, Hulstrand said.

There is a difference between normal PCR and qPCR. The quantitative reaction means that every sequence and step of the DNA sample is analyzed by the machine, while normal PCR does not.

“The time it takes for the entire process varies, but it generally takes about a week,” Hulstrand said.

The sample collection is done once a week throughout the summer. Hulstrand estimates the testing will be completed with results ready this fall.

Many people have their own predictions on what the source of E. coli could be and their own opinions on how to fix the problem. The results of this project will hopefully answer that question and provide the information needed to the City so they can take the next steps towards a solution.