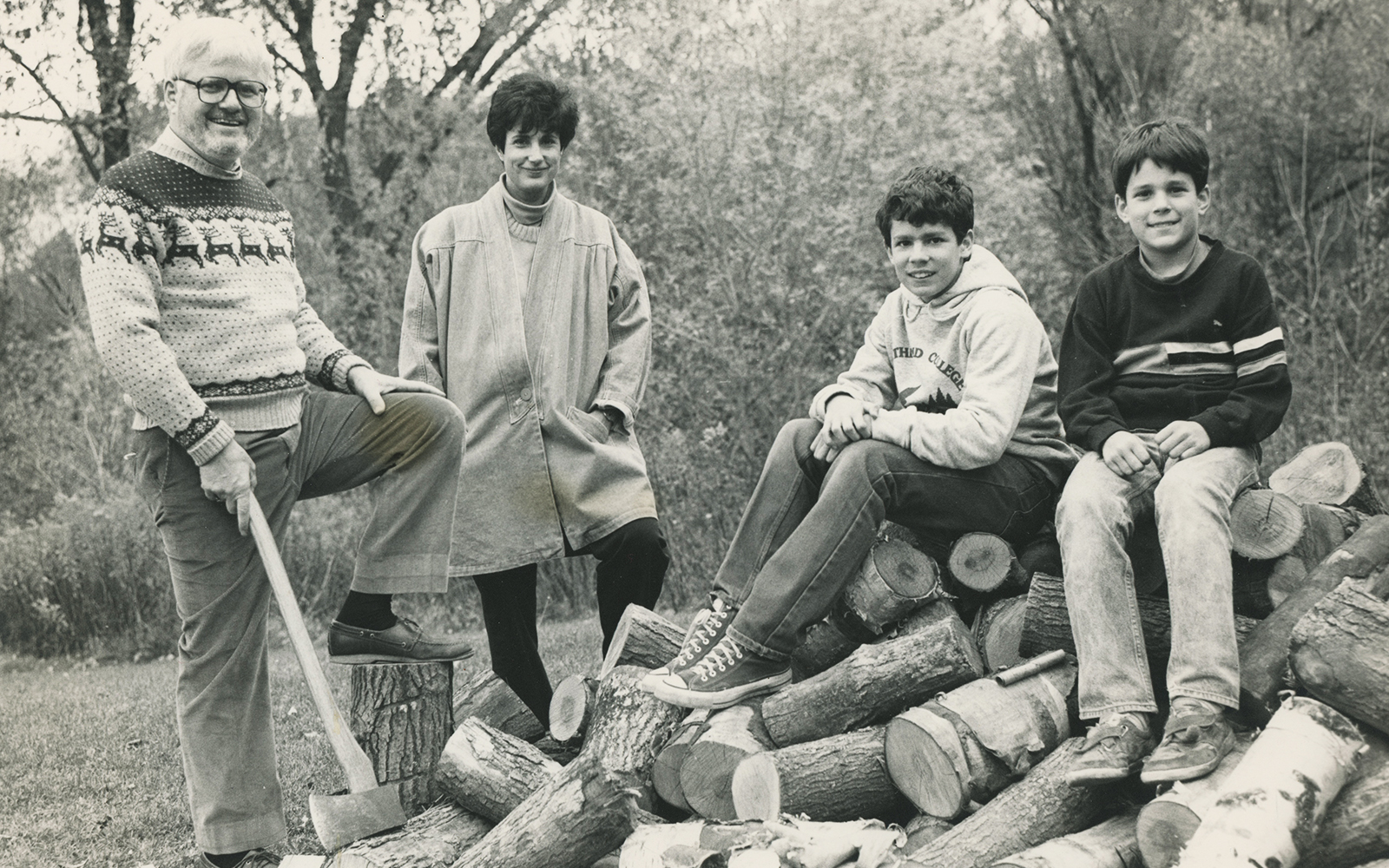 Robert Rue Parsonage, Northland’s president from 1987-2002, made an imprint as indelible as the Northland seal. Filled with confidence, boldness, and a Midwestern work ethic, he built a college for the twenty-first century while giving credence to the past.

“I expected great things and pushed to get them done,” said Bob in a telephone interview from his home on Lake Namekagon. “I wasn’t surprised when they did get done—I enjoyed what I was doing and the people I had to work with. It became a vocation for me.”

He raised funds to build the Larson Juhl Center for Science and the Environment, the Craig A. Ponzio Center, the McLean Environmental Living and Learning Center, and the Mary Van Evera Fine Arts Building.

He repurposed and renovated Brownell Hall and restored Northland’s original building, Wheeler Hall—a building that unites every student who has attended Northland College during its 125+ year history.

Wheeler Hall had fallen into serious disrepair and some advised he tear it down. “Bob was adamant about not wanting to do that,” said Don Chase, who worked alongside Bob during his tenure, and still talks to him periodically. “I think we can say, Bob saved that building.”

His wife, Ruth Lull, says they had come from a part of the country where you don’t tear down old buildings. You restore them.

She and Bob and their sons, Noah and Ethan, had been living in New Jersey. Bob worked at the headquarters of the National Council of Churches of Christ in New York as the executive of their education office; Ruth worked as a full-time parent, children’s book illustrator, and gallery painter. Bob aspired to be a college president, and because of his position, had received many inquiries from search firms.

Ruth remembers arriving on campus, to a pile of wood delivered by a few faculty. “I knew Bob was going to be chopping that wood,” she laughed.

Bob had grown up in Minnesota, canoeing its streams as an Eagle Scout. “It was a homecoming for me,” he said. “I was coming home.”

Ruth also remembers the first party at the house. She and Bob lit a fire but the damper was wrongly placed. “We were smoked out of the place, people standing outside until the smoke cleared.”

Ruth embraced it all. She signed up for courses in snowshoeing, wildlife tracking, downhill skiing, and cross-country skiing. Initially inspired by the Atlantic Ocean, beachcombing, and seashells, the north woods became her new muse. She served for more than a decade on Wisconsin Arts Board and was an assistant professor of art at Northland until her retirement in 2019.

“Those first two years, coming from New England and New York City, learning skills in my new wild environment were frankly, life-changing,” she said. “It gave me a new perspective and broadened my comfort level which showed up in my paintings.” 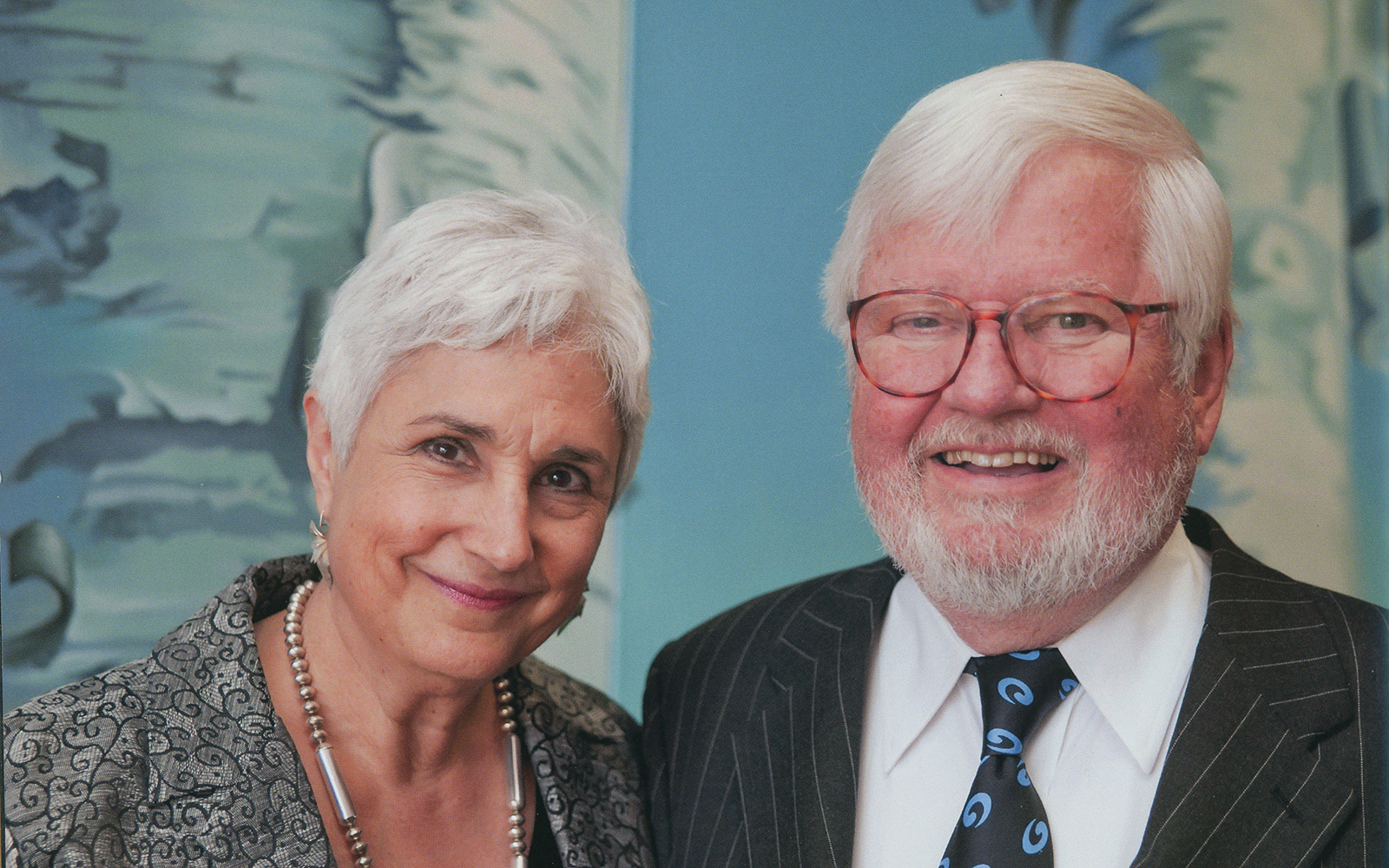 He expanded the board of trustees, reaching out to people who had never been asked. He wanted to recruit people who knew the College from the inside—and that meant alumni.

Jonathan Morgan, who served as the board of trustee president at the time, remembers flying to Atlanta, Georgia, with Bob to meet with Craig Ponzio, a Northland alum who had turned Larson Juhl, from a small shop in Ashland, Wisconsin, into the largest picture frame company in the world.

“Bob was not bashful about asking—he was driven to connect with people,” Morgan said. “Fearless in his approach. He recruited Craig who became and is one of the foundational board members.”

During his tenure, Northland received the Renew American Award for environmental liberal arts education and outreach, was named one of Wisconsin’s five true liberal arts colleges, and was included in the prestigious Earth Day Top Ten honors from the American Institute of Architects.

He also served on community, state, and national boards, taught philosophy and religion when he could, and still found the time to tend flowers and make desserts for the St. Paul Chamber Orchestra when they played on campus.

“It was the greatest time of life and I enjoyed working with the people there and they were so dedicated and so special and I still today have pleasant relations with people I brought to the College,” he said.

Bob’s name lives in very real ways on the campus today. Upon his retirement in 2002, friends created the Robert Rue Parsonage Fund for Opportunities. “During my years at the college, students would ask for help a little money to do interesting things outside the bounds of their education,” he said. “The Parsonage Fund is dedicated to providing funds for those types of experiences,”

Every year, students apply for funds to attend and present at conferences and workshops and travel for research and internships. The fund provides the money necessary for these life-changing, career-building experiences. Bob loves hearing about them all.

Bob and Ruth have taken up full-time residence at the cottage they built while Bob was president. They have been joined by their son Noah who helps take care of Bob who has been in ill-health for the last few years. Bob and Ruth talk daily via Facetime with their other son Ethan, a musician, his wife Amy Gruber, and their five-year-old grandson, Akiva, who live outside Portland. “Akiva has his own YouTube channel,” Ruth says.

Bob is filled with gratitude for his family and his life and his College in the north. “At 83, I’m happy I’m still able to see this College thriving in the care of those who continue to help it advance.”

Bob and Ruth would love to hear from friends near and far. You can send them greetings in the New Year, c/o Northland College Office of Advancement, 1411 Ellis Ave., Ashland, WI 54806.