The Northland College Center for Rural Communities (CRC) conducted telephone interviews with a random sample of 701 households in Ashland and Bayfield counties in December regarding the proposed CAFO in the town of Eileen in Bayfield County and CAFOs in general.

When asked whether they favor or oppose the proposed CAFO in Bayfield County, 63.3 percent responded that they are strongly opposed or leaning toward opposition, 19.5 percent strongly favor or lean toward favoring it. The remaining 17.2 percent are neutral. 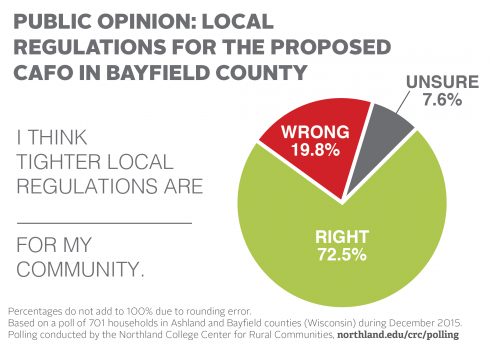 All participants were asked whether they agree or disagree with concerns on both sides of the issue. The top five concerns are water quality, smell, divisions in the community, air quality and health risks.

A majority of respondents are also concerned about harm to local fishing, decrease to property values, inhumane treatment of pigs, and harm to tourism. 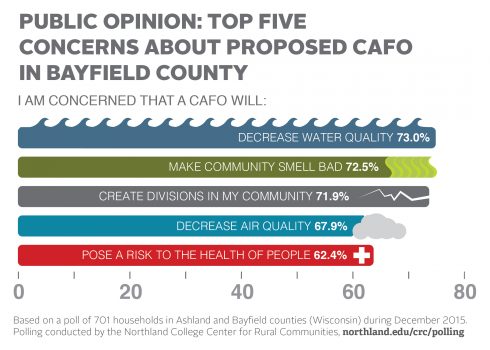 Those who favor the proposed CAFO, are most concerned about missing out on jobs and sending the wrong message to other businesses.

“One of the most interesting findings is that regardless of where people stand on the issue, the majority are concerned that a CAFO will create divisions in the community,” said Brandon Hofstedt, faculty director of the CRC.

This is the first of a regular series of public opinion polls, designed to capture the opinions of people living in the north woods region.

“We were pleased with the number of people who participated,” Hofstedt said. “This is a timely and relevant issue, and people feel as though they can still have an impact.”

In addition to opinion polls, the CRC will conduct regular environmental attitudes polls to gauge the beliefs and behaviors of communities over time. The CRC’s first survey will be conducted this spring, with a focus on winter recreation and climate change.

Interviewers asked 26 questions to a random sample of 701 households between Dec. 3 and Dec. 22, 2015. The margin of sampling error is +/- 3.6 percent at the 95 percent confidence level. A summary of results can be viewed at www.northland.edu/crc/polling.

Founded one year ago, the CRC applies research-based solutions to social and economic challenges, partners with community members to build on local knowledge and promotes the long-term health and vitality of rural communities in the north woods region.