With one trio, two duets, two solos and pages of dialogue, the Captain in Gilbert and Sullivan’s H.M.S. Pinafore is considered one of the largest roles ever written for an actor. And one Saturday afternoon in 1954, twenty-something Henry Fitzgibbon ’51, found out with no time to prepare, that he would be performing that role on a Broadway stage.

He had studied the role as an understudy but had never performed it. “Now, even without a glance at that role, I was going to perform the Captain that very afternoon—on Broadway!” said Fitzgibbon, 91, who as far as he knows, is the only Northland College alum to have ever performed on Broadway.

Add in the stage movements and dance steps, all while singing and speaking—it’s a complicated, nuanced role to play, even with months to practice. And yet, somehow, Fitzgibbon performed it flawlessly before an audience of a few hundred people. And then did it again in the evening.

“To this day, I have no idea how I was able to do that—doing it totally cold, without a run through,” he said.

Fitzgibbon grew up in Menasha, Wisconsin, in a musical household; his dad played banjo and two sisters sang harmony—the third was already away, singing in Milwaukee. In high school, he worked at Kimberly Clark Corporation, studied piano, and was active in choir and drama club.

His childhood friend Mary Dexter Hepner ’50 (pictured above, left) had gone on to attend Northland College. Dexter wrote to Fitzgibbon and asked him to think about applying. None of his family had ever attended college and he hadn’t considered college as part of his future. Until that letter.

“So, then and there, I started to put money into my savings account, with going to college the following year, a very strong possibility.” 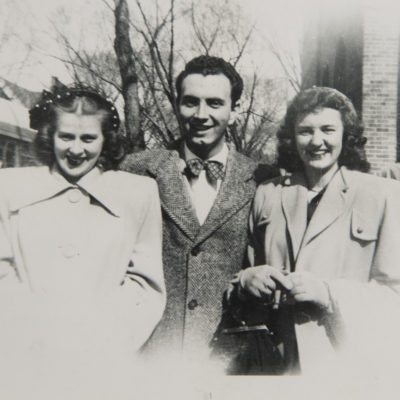 Fitzgibbon sang a solo at his own high school graduation in 1945, and for the next two years, took private voice lessons at Lawrence College (now University) and saved money. In the fall of 1947, he headed for Northland College, where he studied English and music, joined the Blue Masque drama club and sang baritone in the choir. One highlight he recalls is performing a solo section of “The Battle Hymn of the Republic” at Orchestra Hall in Chicago.

The more he performed, the more Fitzgibbon began to think about the possibility of acting as a career. After graduation, he attended the National Academy of Theatre Arts in Pleasantville, New York, getting a crash course in ballet, fencing, stagecraft, and acting.

He auditioned and landed the part of Genie in the production of Aladdin and His Wonderful Lamp, touring the country for the next nine months. When he returned to New York, he earned a spot in a professional Gilbert and Sullivan repertory company, called the Masque and Lyre Light Opera Company, presenting all of the Gilbert and Sullivan operettas in sequence—a different one every week.

Renamed American Savoyards in 1952, the company traveled from Florida to Maine, performed in college towns, and in Chicago and Milwaukee, always returning to New York City to perform at the Jan Hus Playhouse on East 74th Street. The American Savoyards “turned equity,” which meant Fitzgibbon and his fellow company actors were eligible to join the Actors Equity Association, a labor union representing live theatrical actors. In order to perform on Broadway, an actor had to be a member of the union, and one could not be a member unless he or she appeared on Broadway. 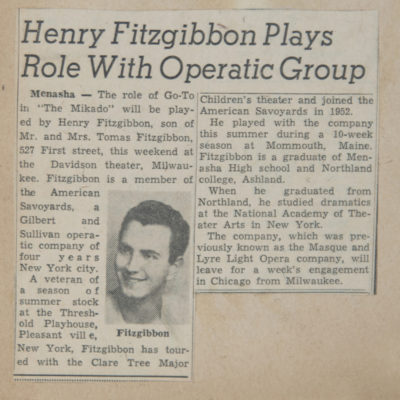 Fitzgibbon says the union meetings were held in the theater district at midnight, a time when Broadway actors would be available. “So, there I sat, among all those famous names of folks that were then appearing in some Broadway production. And I, like everyone else present, would raise my hand to vote on some decision, or other,” Fitzgibbon said.  “For sure, it was a most unusual experience, never to ever be repeated anywhere else in my life.”

In addition to Broadway, Fitzgibbon worked at the Institute of Physical Medicine, and was the director of information for the International Society for Rehabilitation of the Disabled, he sang as a paid member of a quartet at St. Mark’s Lutheran Church and later for world-famous Cathedral Church of St. John the Divine (salary $65 per month), and attended Hunter College in Manhattan, receiving a master degree in music.

In the fall of 1967, after sixteen years in New York City, Fitzgibbon returned to Wisconsin to take a teaching position at Cumberland High School and two years later, Lincoln Junior High in LaCrosse, Wisconsin, where he taught general music, formed a boys’ choir that met before school, and established a chorus in each of the grades in junior high—seventh, eighth, and ninth. “This was unheard of at the time, but somehow my principal made it possible,” he said.

In his off-hours, he maintained a private voice studio, giving private lessons at a music store in downtown LaCrosse. One of his voice students went on to appear in Broadway musicals. Fitzgibbon retired in 1989 and now lives in Florida.

Asked if he has a favorite theatrical character, Fitzgibbon says he’d have to choose the Captain in H.M.S. Pinafore, but he can’t name a specific favorite moment on Broadway—“for me the entire scene of ‘doing theater’ in New York City was, well, just amazing in itself.”