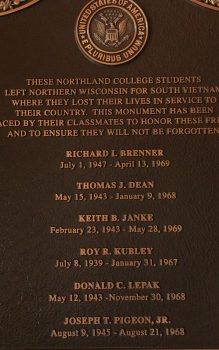 Thomas Dean ’66 is one of six Northlanders who were killed in Vietnam and who have been memorialized on a plaque in the lobby of Wheeler Hall.

Tom Dean first seized my attention when I watched him race about the athletic field—he having joined our intramural football team “The Animals”—with a reckless abandon that I later came to understand characterized his play for the “Siwash” of Knox College, from which school he had transferred to Northland. In the tumultuous 60s, Northland harbored a great many students who had for various reasons left other schools to find sanctuary in the northwoods at Northland.

Tom quickly fit in with the group of friends with whom he chose to play intramurals and we quickly grew close. When he had accumulated several quarters of excellent grades at Northland, he transferred back to Knox College to finish his studies. I drove him south from Ashland to Galesburg, Illinois. I helped him unload his luggage, dragged it into his fraternity house at Knox, and I watched him in my rear view mirror as he waved goodbye from the curb. We would be near each other again as we both served in the infantry in South Vietnam—but unlike me, Tom did not return.

However, his memory did live on. When my eldest daughter Kate was seeking a college, I recalled Tom Dean and my brief visit to Knox College. I suggested that she visit Knox, which after visiting, she eventually enrolled.  When Kate and I went to Galesburg for a prospective student visit, I stopped in the alumni office to inquire about Tom.

The alumni staff shared with me a rather thick file of Tom’s history, and embarrassingly for my daughter, intercepted her tour group at the athletic building to show her the memorial to Tom. Along with the memorial we were also shown the Tom Dean award given to the outstanding player in the annual Knox – Monmouth College football game.  Because of this interruption of the tour, Kate later told me that other prospective students thought she was some highly recruited athlete. The alumni staff provided me with copies of Tom’s file from which I learned remarkable facts about my deceased friend, facts he had never felt moved to share with me.

His father was a Knox graduate and had been a trustee of the school. Apparently quite wealthy, the family – originally from Galesburg – lived in Scarsdale, New York. Having known Tom well, it was no surprise to me that he had rebelled against his influential father, joining a fraternity rival of his father’s and that his defiance had been a factor in a somewhat profligate student conduct leading to his dismissal and subsequent sojourn at Northland.

What I learned of Tom’s later history, enlistment in the army, assignment to Vietnam, and the circumstances of his death, however, were humbling.

Letters and official correspondence in that file revealed the true and astounding quality of Tom’s character. His family’s next-door neighbor in Scarsdale was the serving Secretary of State Dean Rusk, a political connection that could have secured a safe tour. In spite of post-infantry training assignment to Germany—the Holy Grail for infantry school graduates in the 1960s—Tom chose to enlist his family’s clout to procure duty in South Vietnam as documented in a letter from his congressman. This letter directed the Army, at Tom’s request, to change his destination from the comfort of Europe to the conflict in Southeast Asia.

I’d like to advise you of a verbal report I’ve just received from officials in the Department of the Army, in response to my letter of last month, with respect to your interest in serving in Vietnam rather than in Germany.

I was informed that your request for duty in Vietnam has been approved and that assignment instructions will be sent to you sometime next week by the Department of the Army.

I’m sure you’ll be happy to receive this information and I’m very glad that I am able to pass it on to you. It was my pleasure to render whatever help I could to you and I’m delighted that my efforts on your behalf were successful.

Please call on me if there is any other help I may be able to render at some time in the future. Meanwhile, best wishes for all success on your new assignment.

In a matter of just weeks, Tom was involved in a ferocious firefight in which he received fatal wounds. Just as his determination had driven his performance on the football field, Tom’s actions in combat were above and beyond.

Reason: for gallantry in action while engaged in close combat with an armed hostile force in the Republic of Vietnam.

Distinguished himself by exceptionally valorous actions late on  the night of 18 November 1967, while serving with his unit, which was providing security for fire support base Cudgel, located near Cai Lay, Vietnam. Without warning the friendly platoon came under a vicious mortar, recoilless rifle, and rocket attack, which was closely followed by a human wave assault. The Viet Cong, a main force battalion, charged desperately toward Private Dean and his fellow soldiers. Private Dean, located in a forward bunker,  immediately poured a hail of retaliatory fire into the midst of the onrushing insurgents. In total disregard for his own safety, he then ran and crawled through heavy fire to reach another bunker, where he encouraged his comrades and again delivered highly accurate fire upon the enemy. When his

ammunition was expended, he courageously exposed himself once again so that he could keep his fellow soldiers supplied with ammunition. While dashing back to his  beleaguered men, he was hit and seriously wounded. His intrepid actions served as an inspiration to the friendly forces and enabled them to eventually repel the Viet Cong. Private First Class Dean’s extraordinary heroism against a numerically superior force is in keeping with the highest traditions of the military service and reflects great credit upon himself, the Ninth Infantry Division and the United States Army.

Tom did not die that day, but lingered for several weeks in a hospital in Vietnam, too precariously fragile to be moved to Japan. There are in the files given me by Knox College, copies of a flurry of communiqués from Secretary of State Rusk, Ambassador to South Vietnam Elsworth Bunker, and commander of US forces in Vietnam General William Westmoreland all demanding immediate appraisals of Tom’s condition.

Secretary Rusk called from the plane, on the way to Brussels and asked that the following message from Ambassador Bunker be passed to you:

“I went to see Pvt. Dean at the Third Field Hospital today and had a brief talk with him. I gave him your good wishes for a prompt recovery which pleased him immensely and I am sure has given his morale a boost. He seemed in good spirits, his voice clear and strong, and he talked about getting home.

The Hospital Director, Col. Dirks, told me that he had been very badly wounded. His abdomen punctured in several places and it has been necessary to support him twice with artificial kidney. He is renal ward and still on critical list but Col. Dirks say she has shown considerable improvement since being admitted six days ago. I also talked to the doctor directly in charge of case who is hopeful Dean will pull through, although experience with this type of case is admittedly not good. Col. Dirks says he is having the most expert care and I am sure he is.

His brother has come here from Tokyo and I talked with him also. He plans to stay here for the present and says he has been writing frequently to his parents.

Dean was in the 9th Division in the Delta and says his platoon was badly cut up in some very tough fighting, but he talked about it very calmly. It is a moving experience to see the courage of these splendid young men. I wish the doubters at home could witness it.

Col. Dirks has promised to keep me posted about Dean’s condition and I will keep you informed.”

But the monumental weight of the Dean family’s connections, though used to send Tom to Vietnam, was powerless to send him home. His family eventually received the dreaded letter from the Secretary of State.

The Secretary of State

I am deeply distressed by the sad news. I had followed Thomas’s situation on a day-to-day basis and kept hoping for a miracle.

I was deeply inspired by the report which Ambassador Bunker sent me of his call on Thomas and his conversation with him. His life will continue to be a source of the same inspiration to all who knew him or knew about him.

You and your son Willard, Jr. have my sympathy and respect. I wish that there were something which I could say to make it easier.

Kate and I found Tom’s grave, marked with the stark and simple plaque provided by the Department of Defense, in a cemetery at the edge of Galesburg.  Each year while she was at Knox, on the anniversary of Tom’s death, my daughter took some fellow students to his graveside and shared a beer or two with him. We rarely return to Galesburg now, and I wonder who pays visits to my old friend.